Nine days of racing are behind us. Phew! I don't know about you, but I'm feeling the fatigue already. I don't know how the actual riders do it. Though I suppose that it's easier for them - all they have to do is pedal... Though, once again, there was quite a bit of pedaling between last Saturday's prologue in Liège. 1.619km to be precise, which is less than 200km shy of half the distance of this year's Tour.

Bradley Wiggins now leads the overall, as he has for three days now. Though his lead over defending champion Cadel Evans was originally only 10 seconds after the first mountaintop finish at La Planche des Belles Filles, it now sits at 1.53 minutes after a superb time trial yesterday. The overall classification seems to some to be a forgone conclusion unless Evans can surprise everyone, or perhaps Vincenzo Nibali who now sits in fourth.

Some say the riders make the course, some say the course constrains the riders. Both are true, really. Last year's Tour, which had a delicious looking serving of mountains in both classic and untested combinations, came off as rather meh until Andy Schleck upturned the whole race on stage 17. And a dull course can become great if the riders battle as Hinault and Fignon did in their day. But, at some level, we all have expectations of what the course has to offer and whether it will be a doozy or a snoozer of a Tour. As we come full circle to this year's race, how did the first 10 stages match our expectations?

Le Tour began as it did in 2004 - with a prologue through the historic streets of Liège, Belgium. And to keep with the symmetry, Fabian Cancellara won. Really, was any other result possible? But forgone conclusions are not always boring. If you took the time to watch, you could see what a beautiful thing Cancellara's domination can be. Thundering out of the start house, defying physics in the corners... But every good prologue has suspense, too. Before Cancellara's ride, Bradley Wiggins looked to have a relatively poor ride in the prologue at the first time check, only to slip under Sylvain Chavanel's then-fastest time by less than a second. Tejay Van Garderen, Cadel Evans' biggest helper in the mountains and still a young rider, sent the cycling world a note written in all caps. I HAVE ARRIVED. In terms of what a prologue should do, this one delivered perfectly. 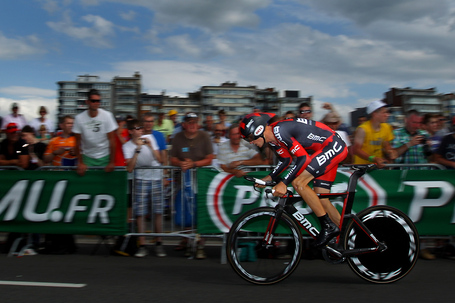 In recent years, le Tour has created a trend that has been warmly welcomed - introducing stages in the first week which draw our memories back to the classics, those ancient races in spring that reward the hard men, the tactically astute, those with the ability to make split second decisions before a wheel has vanished up the road. In 2010, there were the cobbles of Paris-Roubaix. This year, we had the hilltop finishes of stages 1 and 3. The first was remiscient of La Flèche Wallone, the second of Liège-Bastogne-Liège.

In both, the same man won - the young Peter Sagan, riding his inaugural Tour de France at the precocious young age of 22. But the racing the course provoked, ooh la la. On Stage 1, the race leader Fabian Cancellara went on the attack with under 2 kilometers to race. Why? We can't be sure. Perhaps he takes to heart the phrase "the best defense is a good offense." Maybe, he was still hungry after a disappointing classics campaign. Whatever the motivation, the final climb offered a number of riders the opportunity to do something special, and he did, riding away from the entire field save two riders. Two days later, Sylvain Chavanel tried again to pry the yellow jersey off Cancellara's broad shoulders, this time attacking with just over 5km to race. The course, it was set up to reward the opportunists. Had Chavanel not mis-judged a roundabout with 2km to ride, losing invaluable momentum, we may have seen him win. This... this is the kind of racing I want to see in the first week. 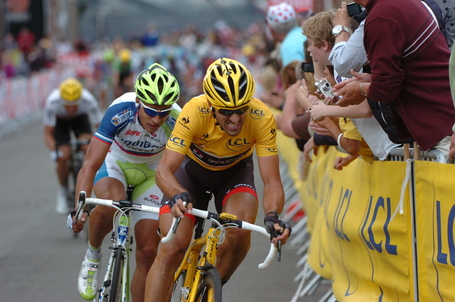 The first week of le Tour is also replete with flat stages, those that favor the riders with the densest concentration of fast twitch muscles and the highest propensity to take risks. While the sprints are full of adrenaline, the repetition of early break, chase, sprint can become tedious. When the same rider wins day after day, the temptation to tune out until the mountains grows. But this year, we had different story lines every day. The first sprint, on Stage 2, had enough twists and turns in the final kilometers to keep things interesting and allow a freelancing Mark Cavendish to slip his way onto André Greipel's wheel with a scant 400m to race before slipping by for victory. On Stage 4, Greipel won after a crash derailed several sprinters in the final kilometers. The next day, Greipel got the better of his erstwhile teammate while Cavendish languished in an uncharacteristic fifth. And the following day, Peter Sagan won his third stage, though the stage and sprint were notable more by the absence of many big names left behind by a terrifying crash 20km from the finish. The secondary stories of stages 5 and 6 were the early breakaway, which stayed away far longer than usual, caught almost in sight of the line. Suspense is what I crave and it is what I got.

If we got suspense in the first six stages, we were treated with muted racing over the next three days. Monday's time trial? It would be hard to call it anything but predictable, with perchance the exception of Evans' loss of over 90 seconds to Wiggins. Days before, when I woke up Saturday morning, I had visions of climbers dancing away on the double digit gradients on the final climb to La Planche des Belles Filles. Instead, Bradley Wiggins' Team Sky set such a ferocious tempo that even those we consider purer climbers could not stay with the leaders. The following day, Cadel Evans used the descent to the finish to put pressure on Bradley Wiggins rather than the climb. And while it was not successful, it was what I have been hoping for since the route was unveiled. The climbers - or anyone, really - must take time out of Wiggins in any place they can. This year, it appears that means on the descents. These mountain stages with descents to the line? I like them for the options they present.

Looking back at these first 10 days of le Tour de France, je suis content. There have been better opening weeks for sure - last year's struck my fancy a little more, to be honest. But this year? The route gave us enough suspense, at least until the mountains arrived. Though stages 7 and 9 separated the overall contenders (or, those who still remained after Stage 6) more than I like, almost every day was a joy to watch. What part of that belongs to the riders is a question without a definitive answer, but I like to think that Christian Prudhomme and his helpers have done a good job over this past week and a half.