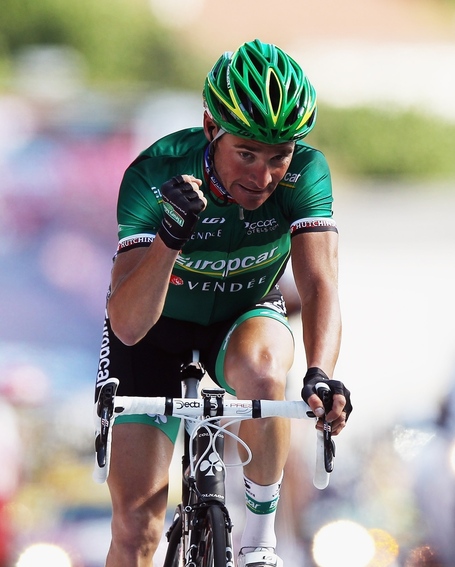 Thomas Voeckler of Europcar reminded Tour de France fans of his legendary panache with his third career stage win, turning himself inside out to hang on over his breakaway mates Luis Leon Sanchez (Rabobank), Michele Scarponi (Lampre) and Dries Devenyns (Omega Pharma Quick Step). Jens Voigt of Radio Shack joined what had long been a foursome with 8km to go, even trying to attack the four leaders, as the winning five-man breakaway shattered over the final minutes. Devenyns attacked with 3km to go, chased first by Voigt, then Voeckler, who had the most left in his legs, and dropped everyone as they passed under 1km to go. Each of the remaining rivals -- first Sanchez, then Scarponi -- gave a last-second dig and pressured Voeckler all the way to the line, but the former shattered and the latter ran out of road, leaving Voeckler alone for the victory. Scarponi came second with Voigt third.

Voeckler took the KOM Jersey with an attack that put him first over the Col du Grand Colombier, an above-category climb making its debut in the Tour, with his three break-mates just behind. Lotto-Belisol's Jurgen Van Den Broeck tried testing the Sky train and Bradley Wiggins a few times, getting a small gap over the top and taking some time back all the way to the line. From the summit of the Colombier, Vincenzo Nibali of Liquigas went straight to the front to pressure Wiggins on the descent, as did Cadel Evans of BMC. Nibali finally did get away, by 30 seconds as he rejoined his teammate Peter Sagan for the start of the Col de Richmond, the day's last ascent, and extended to a full minute, before slackening and being reeled in by Sky's beaters led by Richie Porte.

Tejay Van Garderen of BMC struggled to hang on to his white jersey, as Rein Taaramae of Cofidis, 47 seconds back at the start, hung in with the leaders while Van Garderen sagged behind on the final climb, but the American clawed his way back on the descent to protect most of his classification lead. Little changed in the end at the top of the general classification. Voeckler holds a slim lead in the KOM jersey over former holder Frederick Kessiakoff. 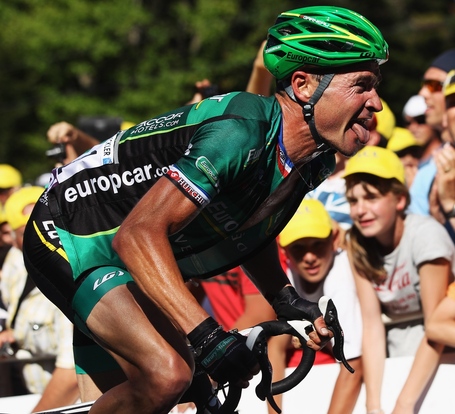