Share All sharing options for: How to Win a Tour de France Stage: Voeckler's Steel Nerves 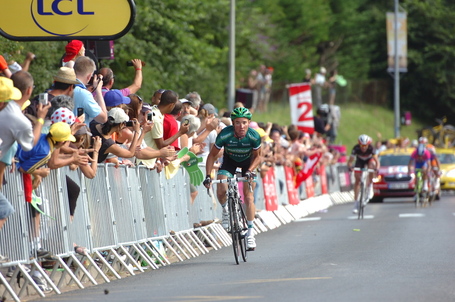 I could write an ode to Thomas Voeckler. Really, there is so much to work with. His panache, attacking flair, gesticulations of his tongue, grimaces, the way he pedals his bike. But there is another quality he has, one which is less talked about than his others. Tommy? He has nerves of steel.

Making the break du jour is hard enough. On a stage like today, one cannot attack too early. One must keep a running tally of every rider and team represented in the break, jumping to bridge only when a magical combination is reached. This skill, we cannot say enough about it. Do you think it is any accident that Sandy Casar, Luis Leon Sanchez, Voeckler, and Jens Voigt all made the same breakaway? These riders, they are masters of the art. But that's not enough.

Once you have made it into the break, persevered over the climbs, and still have others for company, one question comes up. How do I win? The question goes on repeat, your mind churning through all the different permutations of actions that may take place in the final 10km, that brief span when everyone in the breakaway realizes that one of you will win. You know there will be attacks. Not every rider wants to sprint. They all know their best chance at winning is to fly solo, after everyone else is tired.

When everyone has the same plan, only one can prevail. But who will it be? As we join the race with five kilometers to race, it can be one of five riders - Jens Voigt, Thomas Voeckler, Michele Scarponi, Luis Leon Sanchez, or Dries Devenyns...

Jens Voigt has quipped before that "the rider who first takes the initiative - I mean, real initiative, not just 10 fast pedal strokes but a whole kilometer full gas - is the rider who gets away." Today, it looked like that was the case. Not once, but twice, actually. First, Dries Devenyns attacked with 3 kilometers to go. Timed to occur right as the road began its slow tilt upwards towards the finish line, the attack looked promising. The gap extended quickly; Devenyns was fully committed in a do-or-die effort.

Before the gap reached insurmountable proportions, though, Jens Voigt responded. Even when it looked like his gap to the other three was minimal, he kept going. And going. And going. And, as he would have predicted, he eventually got a gap. Voeckler, Sanchez, and Scarponi looked at each other. Voeckler waved his arm at the other two, directed more perhaps at Sanchez, who is deadly in this type of situation.

Had the finish been flat, the story would have been different. The effort required to close a five second gap at 50kph is immensely harder than it is to hold that gap. But the last three kilometers, they rose to the finish.

Voeckler sat and waited. Waited for the other two to lose their nerve. And when the moment was right, he surprised them with an attack to bridge up to Voigt.

Voeckler joined voigt on a flatter section in the final 2km and immediately parked himself on the laboring German's wheel. And, once again, Voeckler waited, this time until the road kicked upwards. He must have felt that he was fresher, more powerful, than his opponent, but he waited until the difference in the power they could deliver to their respective pedals would have the greatest effect.

Once Voeckler lept away from Voigt, the outcome was clear. The gap to Devenyns was reversed in the blink of an eye, the Belgian rider imploding with increasing force as every member of the break in turn passed him. The chasers behind swarmed past each other, each one making an effort only to mis-judge the rise to the finish and implode. Sanchez went too soon and came to a trackstand with 250m to go while Scarponi went too late, visibly closing in on the now-weaving Voeckler but needing another 200m to pass him.

Step back for a moment and put yourself in the place of any one of the riders in the break. How would you have raced? Would you have been able to remain patient and finish off everyone else's plates before starting on your own? To do so requires exceptional patience. Today, we learned a new adjective to put in the dictionary entry for "Voeckler."