Tour de France Stage 11 Preview: Another Stalemate in the Alps?

Share All sharing options for: Tour de France Stage 11 Preview: Another Stalemate in the Alps?

Wednesday's mountain stage, the first of this year's Tour de France, ended in stalemate among the yellow jersey contenders. Despite the obvious difficulty of the road snaking up the Col de Grand Colombier, Team Sky effectively kept the race on lockdown. On the descent, Vincenzo Nibali tried to break free. It was a smart, if predictable move. When Nibali made the junction across to his teammate Peter Sagan who spent the day in the early breakaway, things were looking up for Nibali.

But all too soon, Team Sky reasserted their control, a control that lasted all the way to line. Cadel Evans tried to grab a few seconds in the finale, but he got nowhere. Stalemate. The top five in the general classification remains unchanged after the first full day in the mountains, while Thomas Voeckler celebrated his third career stage victory.

Thursday the Tour de France returns to the mountains. This time, there are four climbs, and an uphill finish. This stage 11 runs from Albertville to a summit finish on La Toussuire. It's short and to the point at 148 kilometers. (By contrast, Wednesday's stage was closer to 200 kilometers.) There is pretty much no flat road in this stage, it's all up and down.

It all starts innocently enough with 15 kilometers of false flats to the base of the Col de la Madeleine. Then, it's so on. The Col de la Madeleine is not the kind of climb where you want to try to warm up the legs. It runs over 25 kilometers. Even for the Alps, known as they are for long grinding climbs, the Col de la Madeleine is a lengthy endeavor. The good news, if there is any, is that the gradients are never especially steep. The maximum gradients are 9%, which is much more friendly than the steep twists of Wednesday's romp up the Grand Colombier. The favorites should stay together over this first climb. Attrition is the name of the game on this opening pass of the day.

The Col de la Madeleine summits at kilometer 40, and there follows around 20 kilometers of descending. Once they reach the valley floor, the riders will have around 10 klometers to regroup and bend their minds to the prospect of climbing the next massive mountain pass on the menu.

This stage does not mess around. The second climb of the day is also hors catégorie. The Col de la Croix de Fer runs 22 kilometers to the summit. The gradients hang in the 7% range, with a few flatter sections to offer the false promise of relief. In truth there is no relief on these high mountain passes, and as the kilometers tick down to the summit, expect to see the screws turn tighter and the lead group grow smaller. The riders will pass the summit of the Col du Glandon at kilometer 90, but they will continue on until they reach the summit of the Col de la Croix de Fer 2067 meters above sea level. 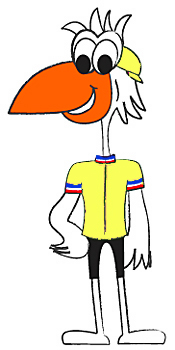 As the riders cross the summit of the Croix de Fer, they will have 55 kilomters left to race and two more cols to climb before they reach the finish. By now, there should be some bike racing, but it's entirely likely that the race favorites will wait for the climb to the finish to make their moves. These opening climbs, difficult as they are, could well unfold as a high-stakes waiting game. Who has good legs? Who's going to attack? Is anyone going to break the stalemate early? I'm guessing not, but really, anything is possible when the Tour heads into the high mountains.

On to the final climb of the day. A bike race should break out somewhere on this climb, but remember during last year's Tour de France, the first few mountain stages of the race saw the race favorites stuck close together. There was very little change in the general classification in the Pyrénées, which came first on last year's course. That pattern could repeat this year. Certainly, Wednesday's opening stage did not see any major reshuffling of the standings.

To reach the finish line, the riders must climb 18 kilometers to the ski resort at La Toussuire. This finishing climb is typical Alpine fare. The average gradient is just over 6%, which is much the same as the other climbs during this stage. The road is relatively wide with swooping corners and good quality pavement. It has to be accessible during the winter, after all. There are a few sections that hit 9% that could offer an opportunity for an ambitious rider to cause mischief, but it won't be easy to cause a selection here. In short, this climb to La Toussuire is not one of the monsters of cycling.

This stage looks good for a break to go early and potentially stay away to the finish. The catch, of course, is that is relatively short. It will be difficult to get a six or seven minute gap here, unless Team Sky really decides to sit on their hands on the opening climb of the day. Which, they could. It's a good day for a rider like Pierre Rolland to chase stage victory. Expect to see the race favorites finish mostly together, unless someone has a bad day. Or, a really, really good one.