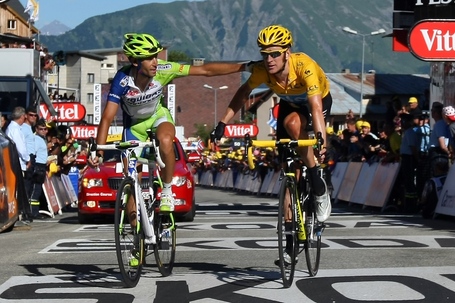 Pierre Rolland gave Europcar and French cycling a second consecutive victory in the Alps with a solo effort to take Stage 11 of the Tour de France. The 25-year-old Loire Valley native can add La Toussuire to his palmares, which already includes Alpe d'Huez from last year's Tour, after he dropped a trio of Vasil Kiryienka (Movistar), Robert Kiserlovski (Astana), and Chris Anker Sorensen (Saxo-Tinkoff), who were the animators of today's stage, trading blows over the Col de la Croix de Fer and Col de Mollard. The four regrouped for the final climb, but Rolland had the most left when the attacks came, and there was no meaningful response when he made his move. Sky's Bradley Wiggins maintained his yellow jersey, but not without wobbling a bit, while Cadel Evans of BMC cracked on the final climb to surrender his top placing.

Team Sky held things in check until the 12km mark, when an attack by Janez Brajkovic (Astana) lured out Thibaut Pinot (FDJ) and Jurgen Van Den Broeck (Lotto-Belisol). The three got a quick gap, and a couple minutes later Nibali took the fight to Sky as well. By this time only Froome and Wiggins remained from the foursome which had paced matters all day, with Richie Porte and Michael Rogers doing great pacing for seemingly ever. But they stepped up the pace ever so slightly, and Nibali was reeled in one km later. But the Italian took a long look into the face of Wiggins, and based on what he saw decided to attack again straight away. Froome hit his limit as Nibali bridged up to the Van Den Broeck trio.

At just over 5km Cadel Evans showed weakness and dropped back, with Tejay Van Garderen staying with him despite being on a terrific day. Sky came back to life, as Froome got on the front again and paced his captain back to the Nibali group. Shortly after, Froome attacked, but Wiggins was the one who couldn't respond, and Froome sat up so as not to expose his leader any further. No doubt that move went over very poorly in the Sky team car. From there the attacking ceased among the favorites, save for a few moves by Pinot, to no avail as the road flattened to the finish.

Astana's Frederick Kessiakoff was among the early breakaway riders and regained his lead in the King of the Mountains competition by taking second over the hors-categoire Col de la Madeleine and first over the HC Col de la Croix de Fer. Van Garderen held on to his white jersey lead, despite staying put with Evans, thanks to the disappearance of Rein Taaramae from the lead group of climbers. Van Garderen seems to be gathering strength as the race continues and is making a case for his eventual pursuit of personal goals, unencumbered by domestique duties.

But the story today was the French climbers, again making news and bringing their cycling-proud host nation back from its dormancy.