Team Sky: Who is the Strongest Rider?

Share All sharing options for: Team Sky: Who is the Strongest Rider? 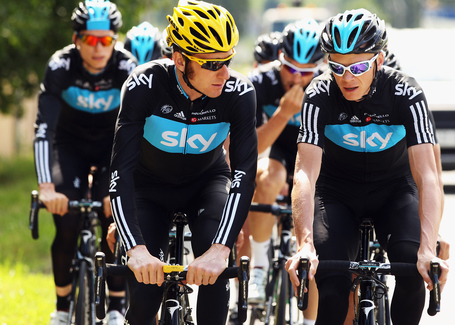 Everything went according to plan for Team Sky and their captain Bradley Wiggins today. They nullified Cadel Evans' threatening attack on the Col du Glandon on the way to the summit of the Croix de Fer. Vincenzo Nibali and Jurgen Van Den Broeck, who had attacked roughly halfway up the finishing climb to La Toussuire, had been brought back into the fold. Evans was even suffering, dropping off the back of the group of overall contenders. Wiggins himself hit the front of the group to do some work, looking nonplussed about the whole endeavor.

At least, everything had gone to plan until kilometer 144 of 148.

At that point, Wiggins' lieutenant Christopher Froome hit the front again, bursting clear with a sharp acceleration. The reason seemed to be to gain time on Cadel Evans and move up into second place overall. Wiggins had not shown any obvious weaknesses, so perhaps he could fend for himself in the final kilometers to the finish.

Froome was clearly stronger than the riders left in the group and, notably, seemed to put his leader under more pressure than Wiggins' rivals in the group. Nibali and Van Den Broeck accelerated again as well, almost catching Froome. Wiggins floundered 50 meters back and alarm bells went off in the Team Sky car. Within two hundred meters, the order to sit up and wait for Wiggins came through Froome's earpiece. He complied, easing off and talking extensively through his radio to directors in the team car for the next two kilometers. At the end of the climb, he was given freedom once again and almost won the sprint for second place against Thibaut Pinot and easily distancing Wiggins, Nibali, and Van Den Broeck by two seconds in a scant few hundred meters.

After the stage, both Wiggins and Froome were bombarded by questions about the final four kilometers. Wiggins seemed to acknowledge his weakness in passing, claiming "With three kilometers left I could hardly climb at all." However, he quickly moved on to assert Froome's attack was all part of a plan.

I didn't have a radio at that point as my earpiece had fallen out. But this morning we certainly spoke about Chris maybe attacking in the final and we had already gotten rid of Cadel... but this morning we were planning on him still being there and Chris maybe making up those 20-odd seconds to move into second on GC because he wasn't 100 per cent confident that he'll have the better of Cadel in the last time trial. We wanted to try and get a bit of time today... it was the plan this morning as long as I stayed with Vincenzo and those guys. And Chris didn't drag them away.

At the same time, there might have been a hint of frustration since Evans was already dropped, negating much of the need for Froome to attack. Froome adamantly insisted he was following orders, backing off to wait for Wiggins when it became apparent he was in difficulty. When asked if he thought the dice were loaded in favor of Wiggins winning because he was given the role of pacing him up all the climbs, he responded "It depends on how the team rides it, but this is how Team Sky are choosing to ride and I'm sticking to that." He continued to aver:

I think Bradley's in a better position to win the Tour this year than I am to be honest. I follow orders at all costs. I'm part of a team and I have to do what the team ask me to do. He's just as strong as me I think and he's stronger than me in the time trial and we've still got a 50km time trial coming.

The responses have different tones, but whether that is just due to personal speaking styles or different views on the race situation is unclear. When team manager Dave Brailsford was asked about the situation - specifically who the stronger rider was - he too shifted attention to the time trail. "Look at the result of the time trial. Stands for itself, doesn't it?" While Wiggins will likely put more time into Froome in the time trial, Brailsford must know the amount of time he can is in question, as is how much of that could be reversed in the mountains.

Away from the race, the two riders' wives offered more starkly different takes of the day's events. Wiggins' wife seemed to blame Froome for Wiggins' weakness, agreeing that a crucial moment hurting Brad was when Froome dropped to the back of the group and left Wiggins isolated to work on the front. Froome's wife begged to differ, seemingly annoyed by how her husband had been restrained from leveraging his strengths on the day. 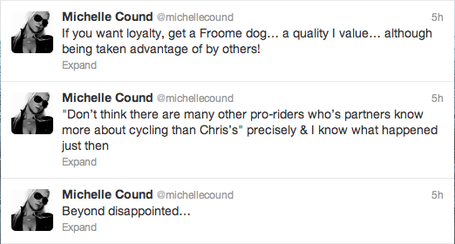 For the moment, Froome is likely to be constrained to a role in protecting Wiggins, especially with Evans over a minute in arrears of his second place in the overall classification and Nibali - whose time trial acumen is not quite to the level of Froome's - also 23 seconds back. He may have the chance to pursue a stage win in the final kilometers of Stage 17, but only once Wiggins is shepherded to the finish with or ahead of his rivals. The only place Froome can truly ride for himself is the final time trial on Stage 19. If Wiggins does not falter, the two will be closely matched. In short, Froome looks unlikely to challenge his teammate for the malloit jaune, though the gap may close some in the final week of the Tour.

Looking to the Future

Though Wiggins has a 2.05 gap to Froome now, 1.35 of that came in the first road stage of the Tour when Froome suffered a puncture in the closing kilometers of the stage. Thus, in terms of time gained on the road, Wiggins leads Froome by a mere 30 seconds. It is almost impossible not to consider the hypotheticals. If Froome had not lost time on Stage 1, would we be seeing a different race? Today, it appeared Froome could have taken close to 30 seconds out of Wiggins in the final four kilometers if he had continued his attack, perhaps more.

Just nine months ago, Froome and Wiggins were in a similar situation. After withdrawing from the Tour de France early with a broken collarbone, Wiggins went to the Vuelta a España in a dual attempt to salvage the second half of his season and become accustomed to playing a leadership role in a grand tour. Froome entered the Vuelta as a domestique but became half of a two-pronged attack on the overall classification, most notably in the mountains. While Froome was given free reign on several summit finishes and gained time on Wiggins there, he shocked the cycling world more when he placed second in the Stage 10 time trial behind Tony Martin and 23 seconds ahead of Wiggins. At the end of the race, Froome finished second, 1.26 ahead of Wiggins.

Predictably, Froome's stellar performance piqued the interest of team managers. Jonathan Vaughters admitted he tried to court Froome but simply had too few resources to sign him. In September of 2011, though, Froome extended his contract with Sky for 3 years. In doing so he acknowledged the role Sky had played in his success, saying "Standing on the podium at this year's Vuelta a España was the highlight of my professional career so far. But that success was only possible because of everyone at Team Sky, both on and off the road, and so I am absolutely delighted to be signing an extension to stay with the team."

Though Froome's besting of Wiggins at the Vuelta can be attributed in part to Wiggins' inability to regain peak before the race began, his performance in this year's Tour raises questions that are harder to answer, particularly for the Sky management. What if Froome really is better than Wiggins? After re-signing Froome, Dave Brailsford stated "We are all very much looking forward to supporting Chris' future developmenbt and working with him to consolidate and build on his breakthrough performance over the coming seasons." That may prove trickier than initially imaged.