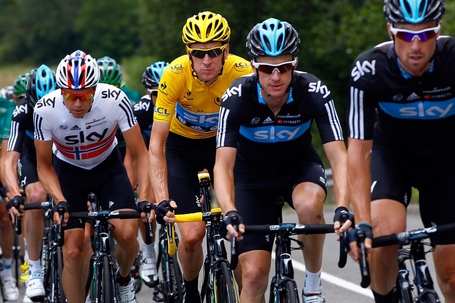 But who's Number Two? Huh? Now you're intrigued, I'd bet.

I confess, this exercise has lost a lot of meaning in the last week. Back then, it was timely to contemplate which team would use tactical brilliance and strength to exert the most influence, win or lose, on the Tour de France. Well, over the last two days in the Alps only one team could be said to have qualified for consideration in any real way, while a great many other teams are either not measuring up or are pursuing other goals. Should I just give in, declare this a one-horse race, and move on? That would be the sensible thing to do. So...

Top five, on the flip. 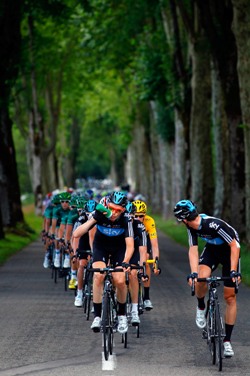 I was resenting items 1-4, but #5 could make it all worthwhile. Incidentally, who are you backing, Bradley Wiggins' wife Catherine or Chris Froome's girlfriend Michelle Cound? I'm taking Michelle, the plucky underdog. She's timed her pique to perfection.

Their war with Sky has been completely one-sided, with Cadel Evans either unprotected or unable to keep his end of the bargain. Still, they have sunk or swam as a team, particularly today when, once again, they were down to Tejay Van Garderen as Cadel's only company, and this time TVG sacrificed maybe two minutes off his own time to help Cuddles limit his losses. They may not be doing much about Sky at the moment, but they're doing it the right way. Oh, and thanks Wiggo for the bulletin board material, congratulating Evans on his courageous (and impliedly finished) defense. I mean, there's only nine stages left. What could possibly go wrong?

Aaaannnd... we're done with GC teams. Europcar get a best of the rest, not so much for burying the pack but for getting away for two stage wins and moving Pierre Rolland up the GC in the process (9th now, best Frenchie, which means he's in line for a steady string of subjective prizes). Whatever. When you sweep the Alps, you're having an awesome Tour, by pretty much everyone's standards. And don't get me started on the quality of Europcar rentals. Aces, I tell you...

Confession, I don't wake up early enough to see the first few waves of fireworks, so if you have another entry here, please make your nomination case in the comments. But I have caught Jurgen Van Den Broeck on the loose a few times and he's had Jelle Vanendert by his side to get the tactics right. From day one their goal has been fifth place in the Tour, and by gum, they will stop at nothing to protect it all the way to Paris.

This is the anyone-but-Liquigas vote, not because Liquigas have been horrible or will be horrible, but because DAMMIT can someone please help Nibali? Basso? Szmyd? NEEERRRRZZZZ?!?

Anyway, this is the Shack's moment in the sun, and who am I to take it from them? They have proven to be the number one team, by some 12 minutes, according to the rules of team rankings which encourage every rider to pursue his own personal GC agenda. In fact, if the team competition used the top five times instead of the top three, RSNT would have an even bigger lead. Honestly, this ranking defines the Shack, and vice versa, so perfectly I can barely get over it. Want to disguise internal chaos by winning the "team classification"? Get three guys home in reasonably good shape every day. Want to reward an outfit with a bunch of climbers who have absolutely no internal agenda to rally around besides their own private fortunes? The Shack is your squad. I know it wasn't their fault, but having the neutral Mavic car as Klodi's support in the time trial is too perfect an image. The funny thing is, I'm not even trying to be critical. They backed the Schlecks, unfortunately, and were left with a wide assortment of C-list GC guys holding the bag. What else can they do?