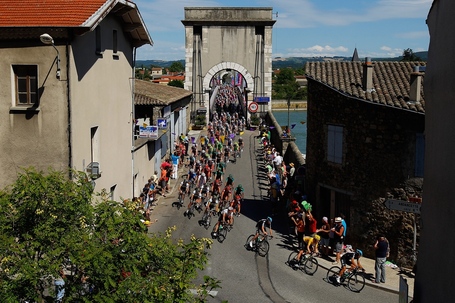 Europcar narrowly missed its chance for a third consecutive victory, as did French cycling, when Garmin-Sharp's David Millar outfoxed his breakaway mates to win the 12th stage of the Tour de France in Annonay today. The Scot followed a late move by AG2R's Jean-Christophe Peraud which left Europcar's Cyrille Gautier behind, with Euskaltel's Egoi Martinez and Robert Kiserlovsky. Millar and Peraud rode the last 3km together, with Peraud maneuvering Millar into the front as they began the sprint, but Millar had enough to win his fourth career Tour de France stage.

No changes to the general classification today, as this rolling stage exiting the Alps region was never likely to interest the leaders. FDJ's Thibaut Pinot suffered on this rolling stage, but was able to rejoin the remaining contenders before they rolled in nearly eight minutes later. Liquigas' Peter Sagan increased his lead in the points competition over Matt Goss of Orica GreenEdge after Goss was relegated for a dangerous move in the two-man sprint, at first won by the Australian.