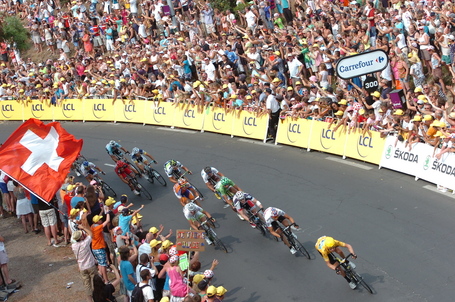 Andre Greipel of Lotto Belisol led the charge past the Team Sky train and held off LIquigas' Peter Sagan for his third stage victory at the Tour de France. Greipel sat on Sky's Edvald Boasson Hagen and masterfully timed his acceleration on the very fast finishing slope, charging straight down the center of the road and beating Sagan, on his right, by half a wheel. Boasson Hagen, who was doing sprinters' duties for Mark Cavendish after the World Champion dropped off the pace and receiving some support as thanks for all he's done in service of the team, could do little to stay with the top sprinting duo to the line, despite his team's support.

It was a tricky finale as the Tour de France found its way to the Mediterranean coast, with narrow beach roads and strong crosswinds shredding the peloton. The Lotto-Belisol train took charge with 5km to go, and several gaps opened. But the pack came back together at 2.5km, when Luis Leon Sanchez decided it was time to attack. Lotto had just reeled in Alexandre Vinokourov and Michael Albasini, who gave it a try with 12km to go, an there was no reaction to Sanchez, but they were reeled in when none other than Bradley Wiggins led the charge to track them down in the twisting downhill to the line, utterly slamming shut any hope of a breakaway and setting up Boasson Hagen for a chance at a sprint.

Michael Morkov of Saxo-Tinkoff won the combativity prize, thanks to a solo escape that occupied the race for 130km, which Morkov launched to honor his father on the fifth anniversary of his death.

No changes on GC, of course, but the Green Jersey competition became a two-man event when Orica-GreenEdge's Matt Goss dropped on the cat-3 climb of Mont-Saint-Clair, 20km from the finish, and missed out on a chance to stay in shouting distance from Sagan. The Mont-Saint-Clair climb separated out a number of potential sprinters, thanks to a fruitless attack by BMC which had split the field leading up to the climb, but surprisingly (or not?), Greipel got over the top, succeeding where others failed. Greipel moves up into second place in the points classification, 64 points back of the leader's total of 296.