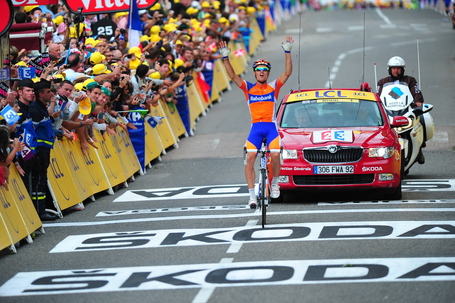 Rabobank's Luis Leon Sanchez attacked a trio of leaders in the run down from the final climb into Foix to win the 14th stage of the Tour de France. Sanchez held his own on the final climb of the day, showing excellent form on the stage, and none of his break companions -- Peter Sagan of Liquigas, Gorka Izagirre of Euskaltel, Philippe Gilbert of BMC, and Sandy Casar of FDJ -- had any response when Sanchez left them inside 10km. Attacks were inevitable with a sprinter of Sagan's quality, a point underlined as Sagan easily took second. But only Sanchez had the legs, taking his fourth career Tour de France stage and Rabobank's first success (of any kind) at this Tour.

The final climb of the day saw a great deal of action. Sandy Casar attacked the front group from a trio of Philippe Gilbert and Luis Leon Sanchez, but the party ended for all of them when their companion on the break at the start of the climb, Peter Sagan, clawed his way back to the front and even took the race lead on the descent of the Mur de Peguere.

Then things went completely haywire when the yellow jersey group approached, starting with Cadel Evans suffering a flat tire at the top, an inopportune moment with no team cars allowed up the climb. Evans waited for a wheel and lost two minutes to Bradley Wiggins in the process. Wiggins apparently instructed the group to wait for Evans, and then things got stranger and stranger. Evans then suffered a second flat tire, and maybe a third, as his team car pulled up to him and engaged in a desperate scramble to get him back in the race. Then Wiggins flatted. Robert Kiserlovski fell and abandoned with a potential wrist fracture. Rider after rider pulled over with punctures. Europcar's Pierre Rolland attacked the group, breaking every unwritten rule in the book, before eventually sitting up. Word came from one of the team cars that tacks had been spotted on the road. In the end there was no great change on the general classification as the peloton rolled home slowly, together. A total of 30 punctures were reported.

The biggest change on the day was the points competition, where Sagan's climbing ability -- always feared, now the source of abject terror -- made dozens of points available to the current maillot vert that his closest pursuer, Andre Greipel of Lotto Belisol, couldn't come within miles of, literally. Sagan won the intermediate sprint, with Greipel ninth, and the Gorilla had no response at all to Sagan's second place on the stage. 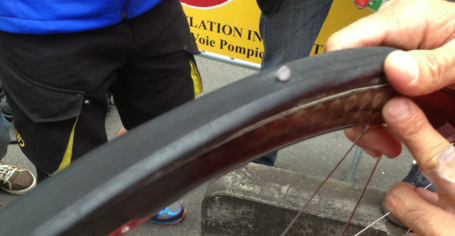