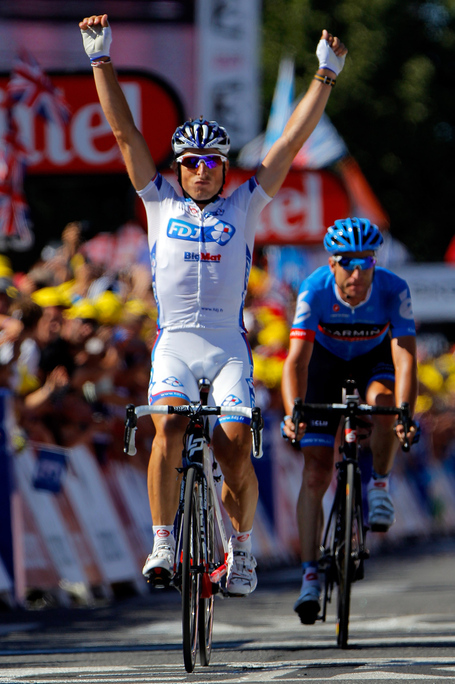 Pierrick Fédrigo won the 15th stage of the Tour de France today, besting Christian Vande Velde in a two-up sprint in Pau after shedding most of his earlier breakaway companions with an attack 6.5 kilometers from the finish. The performance was almost a repeat of Stage 16 in the 2010 Tour de France when Fédrigo also won a stage into Pau from a breakaway. Today also marked the FDJ rider's fourth career stage victory at le Tour.

The breakaway was long in forming today. Innumerable groups got small advantages only to be brought back under the weight of more riders bridging up. This is typical behavior for those longer, bumpy transition stages in the Tour de France where neither sprinters nor gc riders have much chance at stage victory, but the ferocity of attacks today was a bit uncharacteristic for a shorter stage with such a flat profile. The pace was so hard, in fact, that six riders abandoned after the first hour of racing, including Kenny Van Hummel and Sylvain Chavanel, who had been complaining of illness for several days.

The group that finally stuck pried itself loose after 65km of racing and was comprised of Thomas Voeckler, Pierrick Fédrigo, Christian Vande Velde, Dries Devenyns, and Samuel Dumuolin. Niki Sørensen launched out of the peleton in pursuit and slowly rode across the 45 second gap to the five escapees, joining them with 80km remaining to race following a clever bluff by his Saxo Bank teammates. With Sørensen several minutes ahead of the main field and 30 seconds behind the break Saxo Bank started to ride hard, signalling to the breakaway "You wait... or we chase." The break quickly obliged, letting Niki join in the fun off the front.

The gap quickly extended out over six minutes and stabilized for a while as Lotto Belisol in particular seemed to have eyes on an eventual sprint. However, with 50km remaining the gap began to creep upwards again; though Greipel and Goss certainly had chances to win the sprint, neither of their teams seemed to fancy the idea of chasing hard. Cavendish's Team Sky similarly seemed content to save the pacemaking for defending Bradley Wiggins' lead in the Pyrénées later in the week.

As the break went under the 10km banner, Sørensen initiated the hostilities, no doubt hoping to shed Dumuolin and his fast finish. After a round of attacks - which Dumuolin was forced to shut down almost by himself - Fédrigo made the decisive move with 6.5km left to race. Vande Velde quickly jumped up to the Frenchman and the two worked well together until the final kilometer. Though Vande Velde was able to maneuver Fédrigo onto the front for the final kilometer, he had no response once the sprint opened up.

Behind the break, André Greipel took the sprint for sixth ahead of Tyler Farrar and Peter Sagan. Though Greipel gained a few points on Sagan in the final sprint, his absence from the intermediate sprint meant the gap to Sagan extended to 102 points. The overall classification remains unchanged, as does the young riders' classification.