Share All sharing options for: Eddy Merckx The Cannibal, by Daniel Friebe 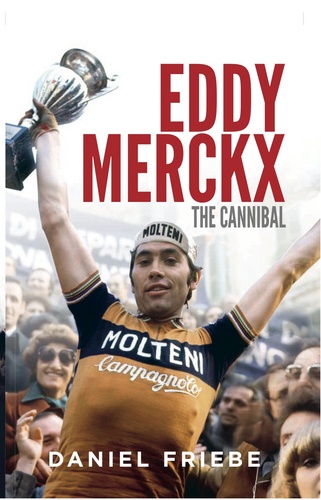 Title: Eddy Merckx The Cannibal
Author: Daniel Friebe
Publisher: Ebury Press
Year: 2012
Pages: 344
Order: Ebury Press (£16.99, that's about $26.5 or €21.5)
What: The legacy of the greatest cyclist ever - shut up Lance - from early proceedings to final pedal kicks. Or, a look at the man who looms over this sport like Jan Ulrich over that final chocolate chip cupcake.
Strengths: It's the story of a man, and not the myth of a god.
Weaknesses: Sometimes I was confused, but I am very easily confused.

Confession time: I don't really like biographies. Off the top of my head, the only one I have ever read is... uh, either It's Not About the Bike: My Journey back to Life or Every second counts. I don't even remember, but it was one of Armstrong's. Next time I will remember to pack a sufficient amount of books on vacation. Why I travel with people who own Armstrong biographies I am yet to find out.

So, suffice to say I dove into Friebe's Eddy Merckx, The Cannibal with a hefty dose of scepticism, and maybe even some ill-will. Lance does that to me. But Friebe tossed away my prejudice straight from page one.

A raindrop topples off the hunter's nose. He doesn't twitch. He kicks and breathes harder. The prey swipes sweat from his forehead, then lowers and tilts his head to face the triangle of daylight between bicep and ribcage.

He watches, waits and listens.

If you guessed correctly that looming behind is the one and only Eddy Merckx, you are correct. Go you! But if that guess was born out of an assumption that Merckx is the only character this book has to offer, then you are mistaken. Give back that gold star you just received. 'Eddy Merck, The Cannibal' is as much about the man himself as it is about his competition, his time and his races. It's about a world that has The Cannibal at its centre, but we see that world through others' eyes. And through all those eyes, we discover the picture of a man.

Because, you see, to a Belgian Merckx is a god. He's the combination of Zeus, Thor (the real one) and Tezcatlipoca*. He's the crown on our dominance of this sport (Italy and France, shut up. Australia, don't even think about it). Every Belgian knows, from birth it almost seems, that throughout his career, Merckx won all the races there ever were. The Tour de France, Ronde van Vlaanderen, Milan-San Remo, Paris-Roubaix, the Giro d'Italia, Monza, Il Palio, the arms race... every single one.

But, I am (fairly) young. My earliest cycling memories are of watching a stage of the Tour somewhere in the Pyrenees and somewhere in the mid-nineties. I don't know where it was or who won, but I remember lots of candy and gadgets, and it being impossible for an approximately nine year old gs to solve a French l'Equipe crossword-puzzle. I wasn't around when Eddy won stuff. So, reading how he did it is pretty damn cool.

Still, the pages where Eddy isn't winning were my favourites. On those pages we are reminded that even Tezcatlipoca is just a man. A man who makes mistakes, who does things wrong, who overconfidently blows up mid-race and who naively falls in traps. A man with doubts and worries and a hunger for winning so insatiable it tore him up when he didn't.

This portrait of Merckx as a young man is painted with the tales, anecdotes and memories of his rivals and colleagues. "I used to tell him to go stuff himself", remembers Dino Zandegù. "When you're hurting, you turn nasty. I'd be shouting from the back of the bunch, 'Vaffanculo, Merckx! Bastardo!' Half of the peloton detested him despite thinking that he was an ok bloke." To me, these side-way glances, these other angles, these memories seen through others glasses, as rose-tinted or warped as they may be, teach us more about Eddy the man than any hagiography about Eddy the Tezcatlipoca ever could.

And so, through Friebe's excellent pen (keyboard? laptop? iPad? Can you write an entire novel on an iPad without going batshit insane?) I went on a 344 page Eddy Merckx-rollercoaster. I felt his despair at the occasional bout of not winning, I got more than a little angry at the Italian fans when they booed and vexed him at the 1968 Giro and I sniggered at the stories of young Eddy, in all his naive innocence. I also raised an eyebrow when, in the 1974 Giro, Merckx showed De Vlaeminck "this wound that he had in his groin. It was as thick and deep as a finger." But, hey, Roger always knows what's best.

Is the book without flaws? No, it isn't. The editors could've perhaps gone over it one more time to catch those left-over typos. And, if Barry Hoban wanted to yell 'pay attention' at Merckx during the 1966 RVV, he should have yelled oppassen, not passen as Friebe claims. And finally, the occasional jumps in time and place are somewhat confusing to someone who doesn't already know all these stories, but I imagine that for those who do, it keeps things interesting. Which only goes to show that you can't please everybody all the time. Unless, maybe, you are Bernie Eisel. But that's a tale for a different kind of book.

*Aztec god associated with the night sky, the night winds, hurricanes, the north, the earth, obsidian, enmity, discord, rulership, divination, temptation, jaguars, sorcery, beauty, war and strife. Which is a fairly diverse skillset if you ask me. Also, did you know that besides the god of everything you'd suspect him to be god of, Thor is also the god of goats? That's crazy.