Share All sharing options for: Rest Day Ramblings: It's Time 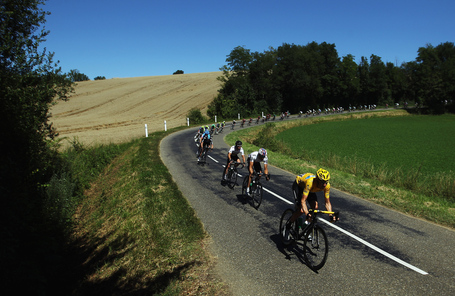 No more messing around now.

All the strategies are out the window. Tactics still matter, but with four days of hostilities remaining in this year's Tour de France, it's just Go Time. If your goal is the yellow jersey, well, that goes to the guy who gets to Paris the fastest, and with Paris so close, it's time to point your wheel up the road and let er rip. Granted, Wednesday might not be the day for the elite climbers, but Thursday and Friday will. With Bradley Wiggins in control and a time trial looming, margins of error no longer exist.

In the Points Competition, Peter Sagan has put the title out of reach. I personally believe Tejay Van Garderen, with his hallmark consistency and seeming improvement as the race has progressed, will not be threatened in the best young rider. There should be a riveting competition for the Maillot a Pois, with Frederick Kessiakoff leading Pierre Rolland by a mere 14 points, and point chaches in the 20-25 range per major summit still available. For these two riders, the post-Tour criterium invitations are worth a huge salary bump, and whoever finishes second can kiss those goodbye. With their teams (Astana and Europcar) eliminated from any other jersey titles, look for plenty of action here.

But that's later. Today is for resting, rumormongering, sensationalizing, rehashing old arguments, and whatever else it is that makes the Tour de France the biggest spectacle of the year.

[Oh, and ... been enjoying hanging around the Cafe? Like wearing... stuff? Now is as good a time as any to remind you that we have plenty of Podium Cafe Tee-Shirts in stock. Contact me to order, Chris[at]Podiumcafe.com. Check em out, left sidebar, scroll down.]