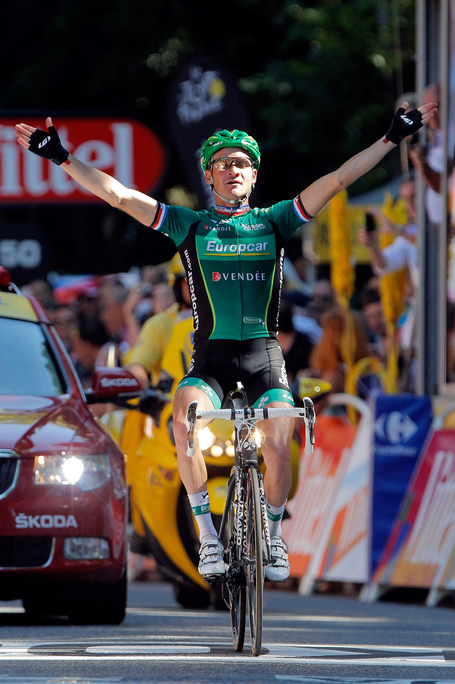 Once again the french master of on-the-bike-emotion, Europcar's Thomas Voeckler grabbed a day of glory, winning the stage in dominant fashion. He rode solo into Bagnères de Luchon having left his breakaway companions behind on the big climbs. On the way he also grabbed the King of Mountains jersey while holding off a valiantly chasing Chris Anker Sørensen. Very few changes in the general classification as defending champion Cadel Evans was the days biggest loser, dropping out of the top 5. Otherwise Wiggins was largely unthreatened on what promised to be the hardest test for him but turned out to be a very controlled affair in the end.

Already from the start it was clear that the breakaway would be the battleground for the Maillot Pois KOM competition. Lots of attacks went already from the start but it wasn't until almost at the bottom of the first climb of the day, the Col de Aubisque, that a huge group got a gap from the peloton. The 38 man group contained no GC threats but save for Pierre Rolland all the KOM contenders were there, including leader Fredrik Kessiakoff.

Things remained relatively calm over the first climb with Sky holding the gap under four minutes and just a few of the weaker breakaways dropping off. At the summit Thomas Voeckler outsprinted Kessiakoff for the mountain points, clearly announcing his intention to compete for the jersey. Passing Soulor on a magnificent descent the gap opened up slightly as the group approached the Tourmalet. Going up to the highest point of this years TdF the front group then blew apart as Dan Martin and Voeckler piled on the pressure on the front, causing the break to disintegrate and the gap to the Sky-led peloton to grow to just under ten minutes. Nearing the top Martin was dropped as well as Voeckler and Brice Feillu rode off alone, Kessiakoff crossed the summit in fourth place and Voeckler now looked like a strong polka dot candidate as he led the race over the top. The duo also looked good for the stagewin at this point. 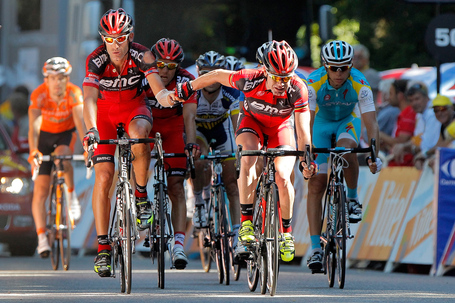 Meanwhile behind in the group of favorites there was total detente as Sky was allowed to ride tempo with Knees and Boasson Hagen. It looked like there wouldn't even by a challenge to the yellow jersey of Brad Wiggins. On the Aspin Liquigas brought their team to the front though to try and shake the tree but were quickly reduced to just Basso and Nibali. With a strong turn on the front Basso managed to drop Cadel Evans, definitely ending his defense of last years victory. He did manage to claw back on the descent but it was not to last.

With one climb remaining Voeckler and Feillu was holding off a small chasegroup of CA Sørensen, Vinokourov, Izaguirre and Voigt with a gap of a little over a minute. Vino and CAS proved to be the strongest chasers and when half way up the last climb to Peyresourde they got to within half a minute, Voeckler decided it was too close and dropped Brice Feillu to hold off the chase. Behind CAS dropped Vino and closed the gap and passed Feillu rapidly but Voeckler's gap had grown.

The favorite group once again upped the pace under pressure from Basso. This caused Evans to drop off again and also Pinot, Rolland and Brajkovic. Then at long last came the big attack from Nibali which only Froome and Wiggins were able to answer. Froome slowly closed the gap with the yellow jersey in his wheel and the three formed a new front group of favorites. Just before the summit Nibali went again but was demonstratively denied by Wiggins as he closed the Liquigas rider down himself.

Voeckler who had a minute and thirty seconds on Sørensen over the Peyresourde descended comfortably into Bagnères de Luchon to take the stage victory and to claim the polka dot jersey, having won all the days KOMs.

Here are your full results and classifications.