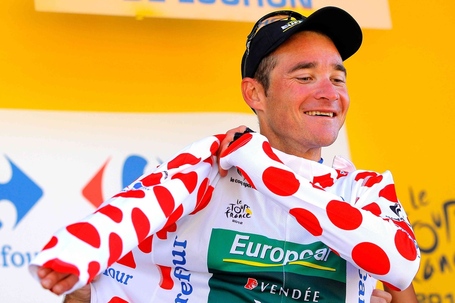 Has any cycling symbol provoked more ambivalence than the polka-dot jersey of the Tour de France?

The maillot à pois rouges, literally jersey of red peas, has long ranked as my personal visual favorite, and in my race-watching youth it occupied a place of tremendous prestige in the Tour. That being the mid-80s, the jersey fell on the shoulders of the (figuratively) imposing Colombian climber Lucho Herrera a couple times, and went to no less a figure than Bernard Hinault as a consolation prize in 1986. Steven Rooks wore it well too, and scrolling backward the history of the polka dots is one dog-choking motherload of cycling class: Bahamontes, the Eagle of Toledo, shared the record of 6 triumphs with his protege Lucien Van Impe. Various tourists popped in for a turn, names like Merckx, Coppi, Bartali, Gaul, Bobet, Geminiani, and other quality riders. Even in pre-modern times the Tour honored the meilleur grimpeur (best climber), with early champions Lapize, Pelissier, Bottecchia, Thys and others earning the honors.

Gert-Jan Theunisse was awesome to behold in our ignorant state of bliss, but the bubble popped. A few solid climbers (Claveyrolat, Rominger, Chiapucci) stood in for a bit, but then Richard Virenque went on his record-setting escapade. Virenque was oddly popular in France, a disgraced doper who only barely atoned for his sins. Worse, he redefined the competition with his patented Loser Strategy, where you crap all over your GC chances in the first week, then leverage your new-found irrelevance into a long breakaway where you scoop up all the mountain points on the first day where the Tour has scattered them all over the road. Virenque was enough of a climber (I guess?) so that if he got a lead in the competition, he could close down anyone who showed interest in their own Loser Move, sitting on them and at least getting secondary points. In good years he was up for a second solo act. In most years, certainly later in his days, barely anyone seemed interested in challenging him.

While Virenque eventually slunk from the stage, the jersey couldn't evade the doping stain for more than an odd year. Laurent Jalabert and Michael Rasmussen got to bring a couple spotted jerseys home, just ahead of the testers. Bernie Kohl and Franco Pellizotti thought they'd pulled the same trick, but didn't run fast enough. The recently retired Mauricio Soler gave the Maillot à Pois back some dignity with a nice, surprising, and promising win in 2007, only to see his career stall and then end in near-tragedy. Anthony Charteau took a win from out of nowhere in 2010. Only last year, after a few decades of waiting, did we finally see a believable star resume the honorific "king" title, when Samuel Sanchez pulled the trick.

That was lovely, as step one of restoring the jersey is getting it into the hands of a recognizable non-scoundrel. Step two would involve the in-race competition, but with Andy Schleck his only close pursuer, Sanchez didn't exactly go out and battle for it in 2011. This year, the King of the Mountains competition is without question the single most interesting classement in the race. Green? Sagan is already flipping through a Porsche catalogue. White? Tejay has that one well in hand, particularly now that he can ride for himself. Yellow? Please. Team? Are you trying to anger me?

What's great about the Maillot à Pois is that the Tour figured out the problem and solved it. In the Virenque years, there were simply way too many points on the road in those early mountain stages, where they'd have seven rated climbs all cat-2 or less. The HC beasts were the most valuable, but they represented too little a percentage of the winner's total to shape the competition, so when the GC guys split those points among themselves with no concern for the classement, the major climbs of the Tour de France ceased to matter in determining the King of the Mountains.

Now, the major climbs are worth 25 points each. Today Thomas Voeckler scored 25, 25, 10 and 10 -- a full 70 points, out of his Tour-leading total of 107. Last week's stage 8, by comparison, had seven rated climbs -- this was the classic Virenque breakaway stage. But the stage had one cat-1 (10 pts), four cat-2s (5 pts each) and a cat 3 and 4 worth 2 and 1 each. By day's end Frederick Kessiakoff had seized the KOM lead... with 21 points. Less than Voeckler scored on the Col d'Aubisque alone. Kessiakoff did use those early climbs as a springboard into the competition, and is still nipping at Voeckler's heels, as he apparently will do til the last point is given. Those early SSKOMs (as Cav might say) are relevant. But they no longer control the outcome. The big mountains do.

Maybe this year is just lucky for us, having two guys who care and are roughly equal competitors -- not to mention fun guys to watch. Maybe next year the GC guys will blithely score all the KOM points without even noticing, or a lone nut will get away again with no resistance from the rest. But I like how it's shaping up, and I really like having the meilleur grimpeur decided on the meilleur montagnes again.