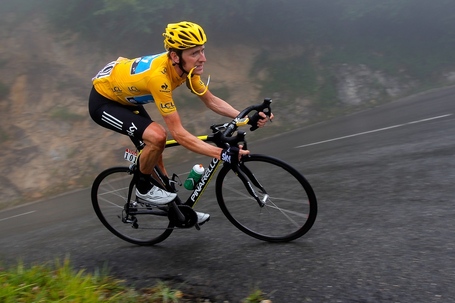 Alejandro Valverde of Movistar completed his comeback from suspension with a narrow, desperate victory in the final mountain stage of the Tour de France at Peyragudes. Valverde attacked before the top of the penultimate climb, the Port de Bales, past his teammate Rui Costa and Euskaltel's Egoi Martinez, then managed to gain enough time to hold on, despite nearly cracking before the stage flattened out in the last kilometer.

The only riders capable of possibly reeling in the Spaniard were overall leaders Bradley Wiggins and Chris Froome of Sky, and Froome seemed quite keen to do so, urging his yellow-clad captain to grab his wheel for a final surge. Wiggins could only just do so, by which time it was too late, leaving the stage to Valverde and denying Froome the chance for glory. However, Froome's efforts did help solidify the duo's lead and lent a great hand to the team's solidarity by not leaving his leader even when he could have.

The race threatened to be interesting early on with more than 60km to go, when Vincenzo Nibali joined a breakaway group prior to the day's big climbs, but he was convinced to drop back by Valverde, presumably on the argument that Sky would only reel them in with Nibali there, ruining everyone else's chances of a day spent chasing the stage. From there, Liquigas took the front of the peloton and never gave it back, but both Wiggins and Froome seemed comfortable enough relinquishing control. Nibali simply never had the legs to make another move of consequence. Attacks were at a minimum among the GC contenders, with only fourth-placed Jurgen Van Den Broeck of Lotto-Belisol making a brief acceleration or two. By the final ascent of the Peygurides Nibali was trailing Wiggins and Froome, not pressuring them. At 3km he lost contact with the leading group entirely.

Thomas Voeckler of Europcar outkicked Astana's Frederick Kessiakoff over the Port de Bales to virtually clinch his overall victory in the King of the Mountains classification. BMC's Tejay Van Garderen lost a bit of time to a frisky looking Thibaut Pinot of FDJ, but in the end Van Garderen fought gamely to the line and heads into the final stages with what looks like a thoroughly defensible advantage. The young American also moved into the top five on GC when Haimar Zubeldia relinquished his place, making it a very successful Tour for Tejay. But the real success was to Team Sky, who are a lock to win the Tour de France and near lock to take the top two spots in Paris.