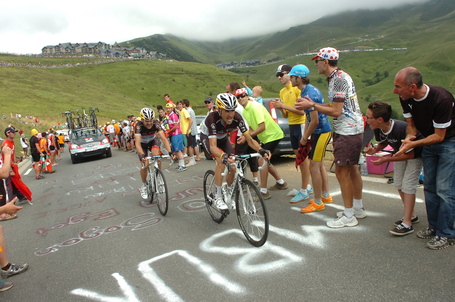 We have borne witness to several incredible acts of selfless team riding in this year's Tour de France. On Stage 11 to La Toussuire, Tejay Van Garderen dropped back to pace his team leader Cadel Evans for the final five kilometers to the summit finish. Evans, though aggressive earlier in the day, began to hemmorage time as Bradley Wiggins' teammate Chris Froome applied pressure on the final climb. Van Garderen, sitting in the top-ten already, willingly lost time to help his team leader.

On the same day, Chris Froome visibly held himself back in order to pace Wiggins up the final climb and minimize any potential time gaps to rivals Vincenzo Nibali and Jurgen Van Den Broeck. With several kilometers remaining, Froome attacked, instantly gapping all the riders left in the small group of overall contenders. Most notably, Wiggins seemed under more pressure than Nibali and Van Den Broeck. Froome sat up and returned to setting pace for Wiggins, even though it was clear he was riding below his capacity from there til the finish. After the stage, Froome said giving up his own chances at winning the overall to help Wiggins' quest for a malliot jaune in Paris was a "great, great sacrifice." At the end of the day, however, his job was to work for the team, which meant protecting Wiggins' lead at all costs.

Today was seemingly set for a similar display of team spirit. At the beginning of the day, Haimar Zubeldia was sitting in fifth position overall, 7.13 minutes down on Bradley Wiggins and 42 seconds ahead of Tejay Van Garderen. While neither a world-class climber or time trial rider, Zubeldia had two weeks of consistent performances behind him. In the Stage 9 time trial, he finished in 13th position, one spot behind time trial world champion Tony Martin and 2.20 behind stage winner Bradley Wiggins. More importantly, he had only conceded 1.04 to Tejay Van Garderen, 37 seconds to Cadel Evans, and was on virtually the same time or better than all other riders sitting 8th to 12th on GC - those who could challenge his GC position in the final week.

In other words, Zubeldia looked a lock for a top-6 finish in Paris. That is, until he was abandoned today by his Radioshack - Nissan Trek teammates on the climb to Peyragudes today after losing contact with the group of overall contenders.

Zubeldia finally had an off day, losing contact with the Wiggins group on the early slopes of the Peyresourde. By the end of the day, he lost three minutes to Bradley Wiggins and Chris Froome and between one and two minutes to other top ten contenders. He slipped from 5th to 7th overall and now lies over 10 minutes in arrears of Wiggins. His prospects for moving higher in Saturday's time trial are low too - Cadel Evans lies directly ahead of him and is should place better on Saturday.

More notable than Zubeldia's implosion, though, was the complete lack of team support for him on the final climb. As Zubeldia slid backwards, Chris Horner and Andreas Klöden slipped awkward glances at their teammate as they rode on. According to conventional logic, Klöden and Horner - who sat 12th and 13th on GC at the beginning of the stage - would have slowed to pace their leader up the final climb.Instead, that task was left to Maxime Monfort, who only reached Zubeldia some time after he had been dropped.

What reasoning could justify leaving Zubeldia out to dry on the side of the road? Perhaps a stage win, though Radioshack had already achieved that with Fabian Cancellara's victory in the prologue. And with Alejandro Valverde two minutes up the road at the base of the climb, Horner and Klöden were unlikely to catch him, especially since that would entail out-climbing Wiggins, Froome, Van Garderen, Van Den Broeck, Nibali, Pierre Rolland, and Thibault Pinot. Predictably, Klöden and Horner were not threats to win the stage; Horner finished 9th, 1.02 behind Valverde and 43 seconds behind the duo of Wiggins and Froome, while Klöden finished further in arrears.

Perhaps Klöden and Horner hoped to pad, or at least preserve, Radioshack's lead in the Teams Classification. Time for the Team Classification is taken from the top three riders to finish a stage on a given team. At the beginning of the stage, Team Sky sat second in the Teams Classification behind Radioshack; by following the Sky duo of Wiggins and Froome the two Radioshack riders were marking their most threatening competition. But, with a lead of over 17 minutes, was this truly necessary? And is it enough to justify losing a top-five placing on GC and the embarrassing images from today's stage? Radioshack still leads the teams classification by more than 14 minutes after today's stage, a gap which would be unlikely to be eliminated in the time trial on Saturday despite Sky's stronger TT riders even if it were in the range of 10-11 minutes. If a breakaway stays away tomorrow - which is likely - Radioshack is likely to be represented while Sky is not, further padding their lead.

Radioshack has been plagued by rumors of non-payment of salaries, a positive test for a banned diuretic by Fränk Schleck, and USADA charges levied against team manager Johan Bruyneel. Cancellara's week in the yellow jersey distracted cycling fans temporarily, but now that the jersey has left the team, the cracks are beginning to show again. Moreover, rumors that Fränk and Andy Schleck will be transfering to another team next year continue to intensify, as do stories of how the relationship between the two brothers and the team's major financeer - Flavio Becca - has soured.

After today's debacle, Radioshack looks even more like a team being ripped apart by centrifugal forces. Klöden and Horner seemed fixated on individual ambition rather than the team; their awkward glances at a flailing Zubeldia seemed to acknowledge they were cognizant of the implications of their actions. It is perhaps one of the greatest ironies in this year's Tour that Radioshack is likely to win the Team classification.