Tour de France Teams Power Poll: Who's Got This?

Share All sharing options for: Tour de France Teams Power Poll: Who's Got This? 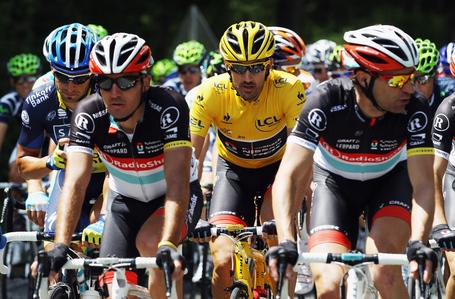 Leave it to Fabian.

When it comes to teams' fortunes, almost nobody has garnered more attention than Radio Shack-Nissan-Trek in the weeks leading up to the Tour de France. There was Andy Schleck's bad back, which was eventually diagnosed as a Tour de France-ending fracture. There was brother Frank's fragile form. There was Johan Bruyneel's act of slinking away from the spotlight, lest the glare overtake the whole team. In short, a squad that had two aces up its sleeve was about to lose one of them (and the other one was snatched from them already on the roads of Flanders this spring).

Up, then, steps Fabian Cancellara. The Swiss Bear, who strikes most neutral observers as a straight-up dude, could have surveyed the wreckage of a team to which he returned when his jigsaw collarbone came back together. Instead, he chose to do what he does best: start dealing out punishment on his bike. Clad in yellow now, Cancellara has given his team a tremendous boost of morale at a time they surely needed it most. It also makes you wonder... what next?

The Shackers are as good an example as any of the fact that the Tour de France is a team sport, through and through. Casual observers have trouble with this fact, and frankly who can blame them? So much of what makes for a great team happens away from the cameras, undetectable to the distant viewer. For example, following the disastrous approach to the Tour, Elder Schleck found himself in a captain's role, for better or worse, and when he struggled to stay in contact with the leaders over the Cote de Seraing Sunday, Chris Horner -- fresh "off the beach," as they say -- stepped up, pulled Frank to where he needed to be, and today Cancellara and teammates occupy four of the top 20 GC spots, with Frank not far behind. Maybe Frank won't hold it together much longer, but the team is a team again, and as they do every year their roster is chock full of GC guys. They're far from done.

Who else came to the Tour loaded for action? Let's do a quick Top Ten of the GC teams at the Tour.

Depth: Great group of veteran guys who mostly were in on last year's victorious loop. When it comes to knowing how to get things done, BMC are at the top of the list.

Weakness: It's been a struggle for them to meet expectations, though whether they care about that or not is hard to say. Certainly having Gilbert riding around Belgium this week isn't helping. Also, Moinard was a nice depth signing, and Van Garderen is showing he can hang with the top climbers, but there's still nobody who you KNOW is going to be there on the hardest climbs, helping Cadel.

Featured Support: Chris Froome. Wiggins needs someone to suffer with him on the climbs.

Depth: Michael Rogers, Richie Porte, Bernie Eisel. Eisel is another glue guy, getting people where they need to be. Rogers and Porte are both competent climbers as well as tempo-setters, which means they can transition to the higher mountain assistance once they're done hammering through the valleys.

Weakness: Experience. Climbing ability is a bit of a question, though I can certainly see Froome staying with Wiggins over the Tourmalet and whatnot. And it's possible the dominant performance we've seen from Sky in places like the Dauphine will have adequately prepared them to reprise their role in the Tour. That's certainly the goal. I'm just taking a bit of a wait-and-see here, while BMC, we know what they're up for.

Featured Support: JJ Cobo Acebo, Rui Costa. Winners of the most recent Vuelta and Tour de Suisse. That's the kind of elite talent that gives comfort to a team leader.

Depth: Plenty: Erviti, Plaza, Karpets, Jose Ivan Gutierrez, Kiryenka. Very experienced team. They should have guys all over the place in the Pyrenees.

Weakness: Just the boss. Nobody loves Valverde's chances in the time trials, where the team strength won't matter too much.

Featured Support: Christian VandeVelde, Tom Danielson. Two former top-ten guys. In fact, they're as much leaders-in-waiting as they are support riders. One nice thing about the Tour, though, is that I'm not sure how much a difference there is in saying "Danielson is a co-leader" versus "Danielson is working for Ryder." Maybe he runs a few bottles, and that's a real difference, but on the climbs I'm not sure VandeVelde or Danielson will have anything to do besides stay with the front group, which they would be doing for Ryder or for themselves. Obviously it does matter on the time trial stages

Depth: Daniel Martin, Johan Van Summeren, Dave Zabriskie, David Millar. Same spiel as with Szmyd, but Van Summeren is a beast on the flats and a fantastic teammate. Zabriskie in that mold too, while Millar is more of an all-rounder and Martin can climb with the best, some of the time.

Weakness: Coming off a tough Giro win, Hesjedal is a complete unknown quantity right now, either about to make history, or be devoured by it. If he looks good thru the Pyrenees and these guys are still all intact, they could be very close to the top of the next Power Poll.

Featured Support: Ivan Basso, Sylvester Szmyd. Basso has been an enigma this year, but he may have a few good days in him. Szmyd... I don't want to make too big a deal out of a few glittering performances. There are other heroic domestiques around and I'm sure I'm overlooking plenty of them. But Szmyd has been a beast at times in the past, and can be counted on for more in the Pyrenees.

Depth: Not much, though the exploits of Dominik Nerz could be fun to watch.

Weakness: Not to go all intangibles, but I wonder whether Nibali has that much support from de Gaas these days. He's about to be a free agent. If they've recommitted to him, then problem solved, but if he's pre-committed to another team, they could give him the "meh" support treatment. Their roster suggests a team at least as concerned with the green jersey as yellow.

Depth: Laurens Ten Dam, Luis Leon Sanchez, Tankink, Wynants... good team, no fat whatsoever except Renshaw, and even he may see some stage win chances later in the race.

Weakness: Rabo-ness, defined as a long, long track record of not living up to lofty expectations. It's not exactly the law. But they're already losing LuLu. Shit just keeps happening.

Featured Support: I guess Frank Schleck fits here now, though roles are up in the air as far as I know. If he gets back on form, he'll be way up there in the mountains. Cancellara is as good a teammate as he is a bike handler. Jens Voigt is the biggest star in the domestique world, and not for nothing. Everyone has their Jens! story. Mine is when he was screaming at Oscar Pereiro for trying to suck his wheel home for a stage win, all while sprinting himself. Pereiro's better judgment took hold in time.

Depth: Endless. Gallopin is the new kid, maybe protected for a bit. Horner is another of those guys every team would love to have, which is ironic since he seems so unwanted at times. [Just age? Some sort of back story here?] Zubeldia, Monfort, Popovich... this has to be one of the most experienced teams in recent years.

Weakness: Top line guy. Though I do like Klodi, grudgingly. On this course, I don't think he goes quietly into that good night.

Featured Support: Johnny Hoogerland, Gustav Larsson, Marco Marcato. Hoogerland is more of a wild card than a classic teammate, but he has guts, which is job one. Marcato isn't really a high mountains guy, but Westra needs him to get around the medium mountain stages. Larsson is the crafty vet, something young Westra could certainly use on his side.

Depth: Definitely a drop-off from the first seven teams here, but I don't want to violate the Power Poll Law of Base Ten. Wout Poels? RobRoy Ruigh?

Weakness: Let's be honest, Westra won't podium here on the strength of his team. They're pretty good and interesting to watch, and if he's doing well he can count on adequate help. But when you look at teams that can really assert themselves, Vacansoleil don't quite measure up.

Featured Support: Maxim Iglinsky, Alexandre Vinokourov. Vino probably has a few good stages left in his legs, and certainly more than enough smarts to... ah, screw it. He'll just keep shouting "attack!" until Jani goes. Iglinsky isn't really a high mountains guy, but I wouldn't be surprised if he hung around pretty late into the big stages.

Depth: Kessiakoff, Kiserlovski, Fofonov... I wasn't predisposed to like Astana this year, but they had a truly fantastic spring. Once they sign Nibali this will be a complete team.

Weakness: If Menchov actually got into yellow, I don't think teams would have trouble putting him under pressure. The support might be there, but I can't look at Gusev and Trophy Mom and tell you that Menchov would be able to hold it together to Paris. Fortunately, you don't need domestiques in time trials. Just good mechanics.