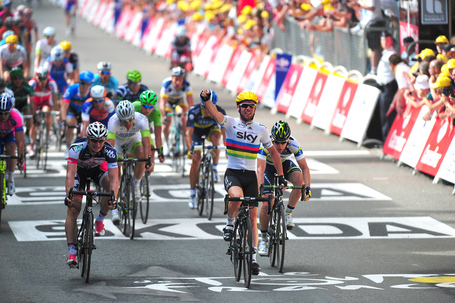 World Champion Mark Cavendish of Sky navigated a very sticky final kilometer to win the first bunch sprint of the Tour de France in Tournai, Belgium. The flat second stage of the Tour presented a clear chance for a sprint victory, causing swarms of teams to battle for the front and a good dozen riders sprinting it out for the win. Cavendish emerged from the left, without the benefit of a train, and interrupted the leadout by Lotto Belisol for Andre Greipel. Cav outdistanced the German by half a wheel, with Orica GreenEdge's Matt Goss a bike length back for third.

The daily breakaway, three guys this time, had little impact on the race, as the peloton made its way across beautiful Namur province to Tournai, pedaling distance from Roubaix, France. The hostilities heated up with just over 10km to go as the sprinters, sensing their first real stage chance. Rabo, Lampre, Garmin, Lotto and of course Liquigas and Sky had their men up front. BMC had Burghardt on the tip of the spear with 4km to go, just to keep Cadel Evans out of danger. Astana brought up Brajkovic for the same purpose, as the road into Tournai narrowed a bit at 3km and teams fought desperately not to get pushed back or crashed. A couple chicanes at 2km further stretched things out for the final sprint.

Luis Leon Sanchez of Rabobank and Tony Martin of Omega Pharma Quick Step were among a quartet of riders coming in four minutes off the pace. Both were suffering from injuries and Martin, a potential GC threat, is clearly diminished at the moment.

In the post-race show Cavendish actually cited Oscar Freire in his win, stating that he saw Freire moving up and, out of respect for the Spanish veteran's instincts, followed him into the ideal position. This race was all about position, with fast men like Alessandro Petacchi, Tyler Farrar and even Peter Sagan unable to navigate the traffic as well as the Manxman, whose nose for the line just keeps getting sharper.