Share All sharing options for: Giro Donne Stage 4 - Vos back on the podium & back in pink

It's shaping up to be an excellent race for the maglia rosa. 2011's winner, Marianne Vos (Rabobank) started the race in pink, winning the Stage 1 sprint stage and Stage 2's ITT, but yesterday, when the race hit the mountains, Specialized-lululemon's Evelyn Stevens took both the win and the jersey. Today's stage looked to be an intriguing one - "just" 98km, a figure-of-8 course starting and finishing in Montecatini, designed by 2006 & 2008's winner, Edita Pucinskaite, who certainly knows how to make races exciting. The first 60ish km were lumpy, but then it was the big climb - around 700m climbing to Goraiolo, then descending all the way down, before a steep climb for 4-5km to the finish-line. From the profile, it looked intriguing - the climbing great for GC contenders like Stevens, Emma Pooley, Fabiana Luperini and Claudia Häusler - but the descending perfect for the race's own Cannibale, Vos.... 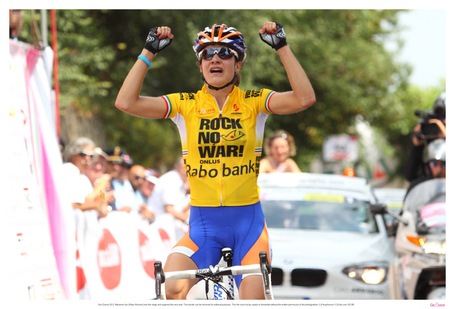 Video and race report below the jump!

Or the full 50 minutes - it's the expanded version of the 15m one above:

It was another hot and humid day, and after initial skirmishes, the first big attack was from a group of 11: Olga Zabelinskaya (RusVelo), Christel Ferrier Bruneau (Hitec), Alessandra d'Ettorre (Diadora Pasta Zara), Lizzie Armitstead (AA Drink), Malgorzta Jasinska & Valentina Carretta (MCipollini), Katie Colclough & Lisa Brennauer (Specialized), Adrie Visser (Netherlands), Sanne van Paassen (Rabobank) and Amanda Spratt (Orica-AIS). An interesting group, but you could tell they weren't going to be allowed to make it to the end when Brennauer dropped back to Evelyn Stevens' chasing group. Despite a lot of small attacks (especially by Valentina Bastianelli (Vaiano), who seems to do this multiple times in every stage - here's hoping it will pay off very soon), and attempts from riders behind to join them, by the halfway point, they had 1:30, and the climb was approaching, and as they hit the bottom of the slopes, the peloton was all together again.

In a replay of yesterday, it was an attack by Pooley, followed by Stevens that signalled the real start of the race, as they hit the climb hard, gaining 35 seconds on a chase group of 10 that included the big GC riders - Vos, Claudia Häusler (Orica-AIS), Tatiana Guderzo (MCipollini), Fabiana Luperini (Faren Honda), Ashleigh Moolman (Lotto), Alena Amialiusik (BePink), Sharon Laws (AA Drink) and Emma Johansson & Elisa Longo Borgini (Hitec) - and behind them, the peloton destroyed, struggling with the climb and the heat. Pooley crossed the GPM ahead of Stevens, but their lead was perilous, and both having joined the sport later than most, they're much better on the climbs than on the descents..... and behind them, Vos had just crested the mountain!

The Dutchwoman easily out-distanced the chase group, caught and passed the leaders, and was out there alone with 10km to go. You'll just have to imagine her descending today, because the roads were narrow, and twisty, and last year a moto came off the road trying to keep up with her - but she'd been 50 seconds back at the top of the climb, and 1.30 ahead at the bottom (thanks blackswangren!). She hit the final climb with plenty of time, and began the last struggle for home.

In the chase, it was all about cutting down Vos' lead as much as possible. Van Vleuten and Amialiusik overcooked a turn and came off on a steep corner, but the rest of the small group stayed together, and when the road levelled out, Pooley attacked, hoping her combination of time trialling ability and climbing skills could fend off the rest - but despite gaining 40 seconds, she was caught by Stevens, Häusler, Luperini, Guderzo and Johansson. Stevens was valiant in defending her maglia rosa, but she couldn't shake off the others, with Johansson especially watching her every move.

Ahead, Vos really looked like she was suffering. She's such a physical rider, you can really tell how much she's working, pulling her bike from side to side as she attacks the climbs. At around 2km to go, there started to be some small descents, and she used every one to her advantage, before heading back to the pain of climbing. All her effort was worth-while - she'd done enough to win the stage and regain pink!

The race for second, meanwhile, was down to Stevens, Johansson, Pooley, Häusler, Guderzo and Luperini, and despite lots of little attacks on the narrow roads that caused the group to split and re-form, none of them could escape, until Johansson jumped in the last 200m, and took second place. Guderzo out-sprinted Stevens for third, and from then on it was all about the chasers coming in solo or sprinting in groups, all trying to pull as much time back as they could.

Here's 5 mins video of the race from the race organisers:

Jerseys after Stage 4: Pooley: Queen of the Mountains, Luperini: Best Italian, Longo Borghini: Best Young Rider, and Vos in Rosa and the yellow of points 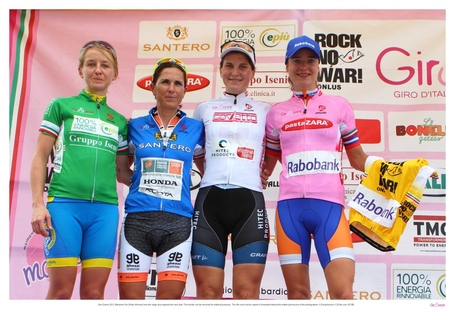 And click through here for Vos giving an audio interview with Tuttobici after the stage, on her descending, being back in pink, and how she's still taking the race one day at a time

After four stages the GC battle looks tight, with four riders in with a huge chance, and five more who could make the podium with some luck and good riding. It's unlikely to change tomorrow, as Stage 5 is time for the sprinters in the laughing bunch to step forward, for 118.7km of pancake-flat - here's what Monty says about it in his race preview:

Stage 5 has the sort of flatness that only exists elsewhere in the cycling world in Chongming. A transfer of 200km is followed by a 118km meander around the old territories of the Dukes of Ferrara from Polesella to Molinella, including passage through the ancient cobbled centre of Ferrara itself. The highest point on today's stage is a mere 8 m above sea level, and I doubt that total height gained for the day reaches far into double figures, so spare a thought for the poor saps who get suckered by their DS into believing that they really want to be in the day's break.

Spare a thought today for the riders out of the race - Natalia Boyarskaya and Hanka Kupfernagel, who succumbed to the heat:

Respect to every rider,who finished the hard GDstage today!!Too hot for my body :-/ Thanks so much to Mirek& Ivonne from AAdrink 4the help!!

And send positive thoughts to Annemiek van Vleuten - after her crash, she finished 11th, but the Rabobank medical team will decide if she can continue the race tomorrow morning.

For more on the stage, there will be a race report and photos on Womenscycling.net - and definitely check out Amber Pierce's live video Q&A, if she can sort out internet access. These have been really excellent, providing loads of insight into the racing, and life in general in the peloton. They've tended to be on around 22:00 CEST (21:00 BST, 4pm USA Eastern, 1pm USA Pacific), but you can find out when by keeping an eye on her twitter, and on the Fuji Bikes facebook app, where you can also leave your questions - or by checking back here. If you can't make it live, but want something answered, leave it in the comments, and I'll ask for you.

As usual, any videos etc will be added to the comments and edited into the article - so check back tomorrow for more information, if not before! And if you're new to the race and have any questions, or see something we might be interested in, let us know below!