Share All sharing options for: A day at the ridiculously crowded races - in which gs visits the TdF prologue

Eight years ago, I spent an entire rainy afternoon sitting by the roadside, watching Cancellara win a TdF prologue. I wasn't a member here yet so none of you saw the pictures, and besides, my little point and shoot camera pretty much couldn't handle taking pictures there anyway.

Fast forward to 2012. Last Saturday, I spent a very sunny afternoon walking the streets of Liège, watching Cancellara win the exact same TdF prologue. And this time, my camera was slightly better. 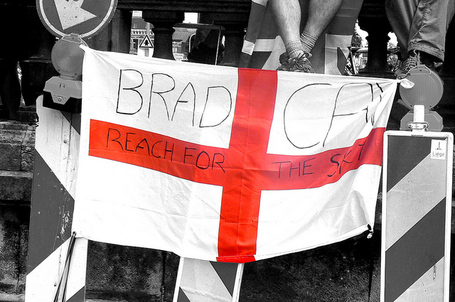 More pictures and more words after the jumpy jump.

Liège is about an hour away by train, and yet, I never go there. So it made me absurdly proud to find out that eight years after the fact I still knew my way from the train station to the parcours. Unfortunately, I was not alone. The crowds were insane. Really crazy, beyond anything I've ever seen at a race (not that I've seen that much, mind you). Among the crowd were a British couple I met on the train, who possessed very little knowledge of Flemish geography ("Do you think we'll pass Ghent?"), and who followed me around until I had the audacity to not queue orderly at the first bottleneck. Our friendship was over before it ever really began.

Of those bottlenecks, there were plenty. Everytime the masses reached a crossing, or an overpass, or anything interesting really, the entire mass of people slowed down and stopped. Add to that the heat and sunshine, and I saw more than one person faint. Somewhere in the rumble I smashed my leg against a fire hydrant, which hurt like hell. I'm whining, I know.

An hour before the first rider even began, every spot on the parcours was taken. Every. Single. One. And judging by the immense cheers he got when he came by during practice, they were nearly all there for one man. 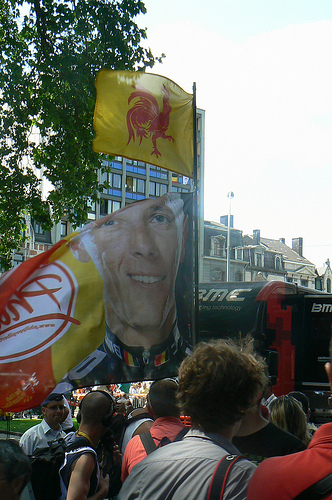 As you can tell, eventually I found my way to the team bus area. Where the crowds were equally large. In fact, none other than defending champion Cadel Evans had to climb a barrier - with his bike - just to reach the parcours. You can imagine how well that went down, but honestly, Cuddles had more than reason to be miffed this time around. Alas, I didn't manage to snap a picture.

As I moved past the buses, one thing became painfully clear: ASO could give a rat's ass about 'common fans'. The VIP-area was huge. Buses were mostly facing each other, with a very big VIP area in between. Plebs like me could only see the back of the majority of buses. Which really, really sucked. Sometimes, I caught a glimpse of someone as they left the bus. 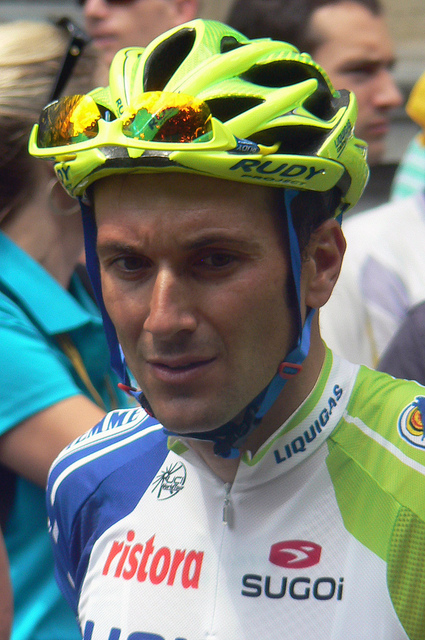 A couple buses were parked in an area which was better accessible for fans: Rabobank, Katusha, Vacansoleil and Saxo. Only a few teams made sure the fans could see their heroes: Lotto and Ag2R mostly. Teams like Sky, BMC, OPQS and Garmin were simply unreachable. And because of the huge VIP area in between the normal people zone and the buses, mostly the view I got was this. 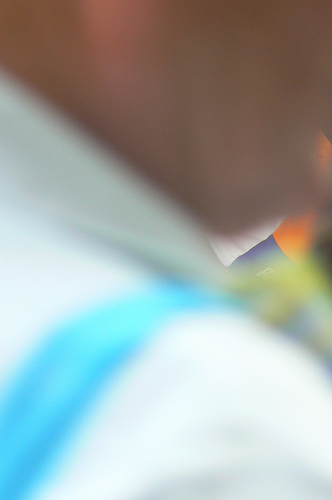 Speaking of Rabo, I've got to give it to Frinking's boys, they were extremely well prepared. They had fans blowing a fine mist on their riders during practice, special cooling vests and cool gel packs were placed on their neck as they were warming up. Below, you see Wijnants all chilly like. 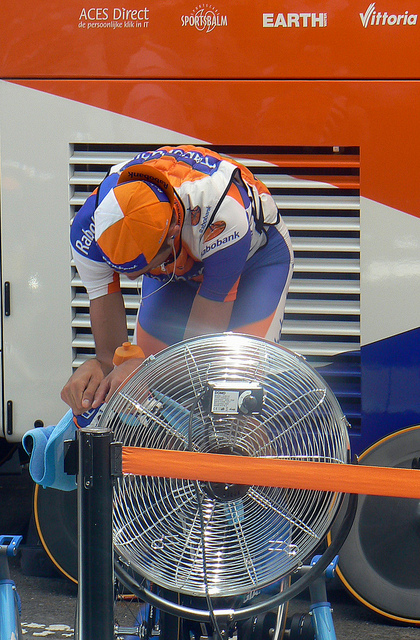 A little while later, Bram Tankink made his way to the start of the race, amidst huge cheers from the crowd. "Come on Tank! Give 'em hell!". Right behind him, Veelers. No cheers. A bit later still, Hoogie. 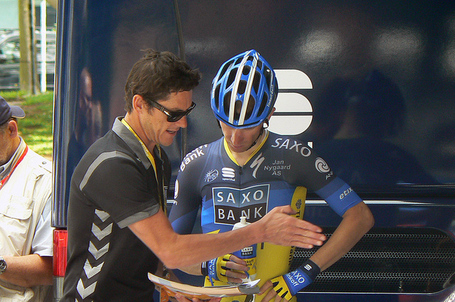 Gusev displayed the most epic mullet in the world. 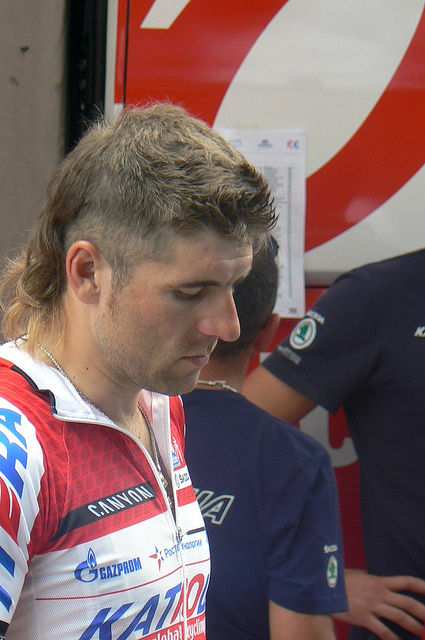 ^ EPIC. Oscarcito came back from his practice run while I was at the Katusha bus. He kept wiggling on his bike, kicking the frame, punching his steering wheel. Guess it wasn't behaving the way he wanted to.

Frohlinger was one of the few guys I saw taking time for fans. Adam Hansen stopped to sign autographs too, and some of the Ag2r guys stopped to pose with fans and a guy in a very weird looking alcatel creature suit. Also, André Greipel is the smiliest dude in the world. Alas, no picture. You can guess who was in the way. 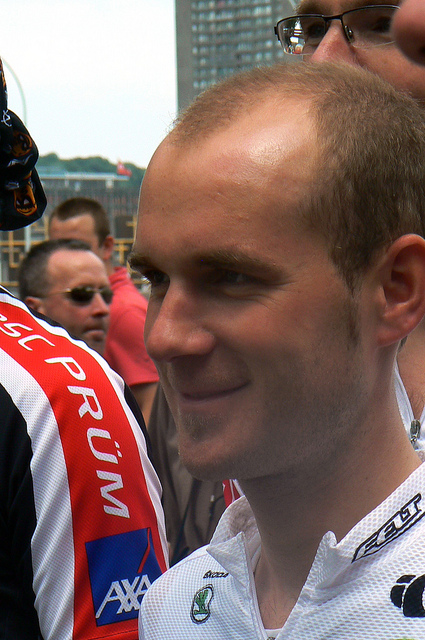 By then I had enough of the stupid VIPs so I moved to the parcours, where I spotted, among other things, a Lampre with only one arm. 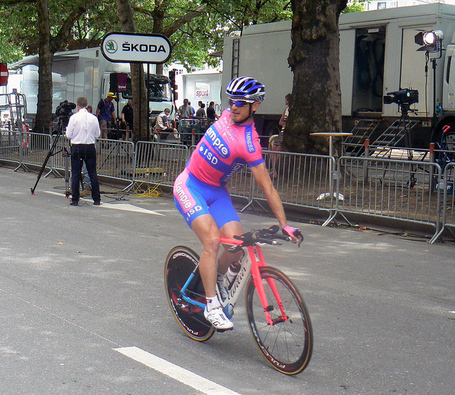 Aaaaaaaaargh. I got to the start ramp in time to see a certain Scot begin his TdF. 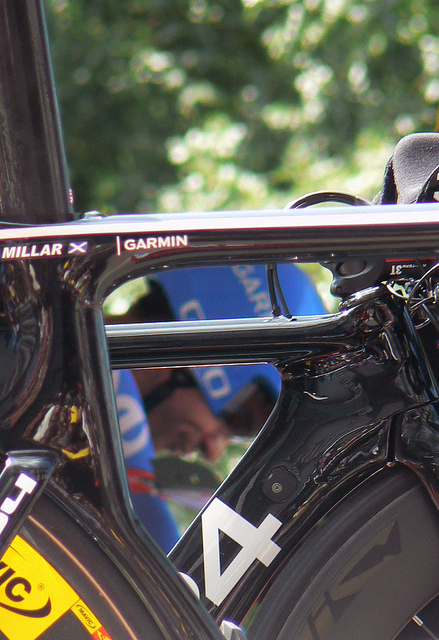 A woman kept complaining that I was in her way, but I couldn't leave before I had a picture of Amets Txurruka. 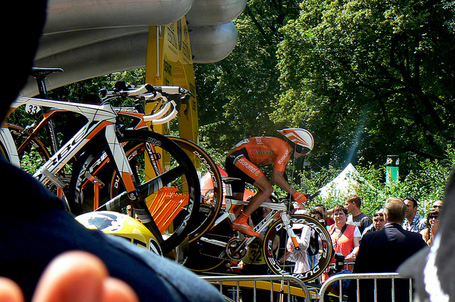 By this time I was getting quite fed up with this prologue, really. This all sucked, and it was warm, and I don't do heat well. I'm Belgian, you know. So I left the race and stumbled upon a little TdF prologue market, with stalls with food and cocktails and even a jeu de boules area. I wanted to buy something from the Basque stall to support Albertina's boys, but it was unmanned. 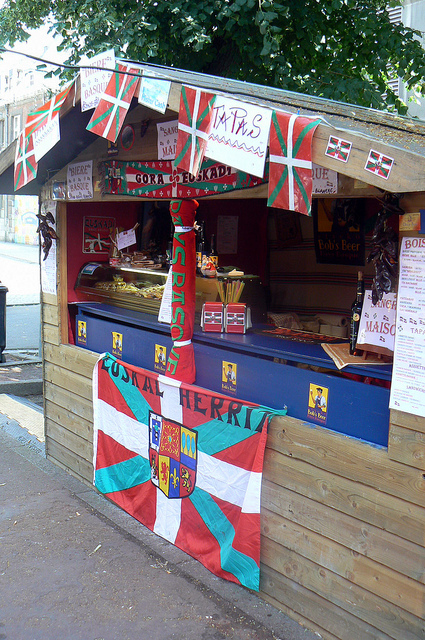 So I found a bar and had a beer instead. Always a good option. Eventually, I did go back to see the race. I found a great spot on the second step of the huge overpass - a slight aerial view on the streets, and no one in my way. Success! 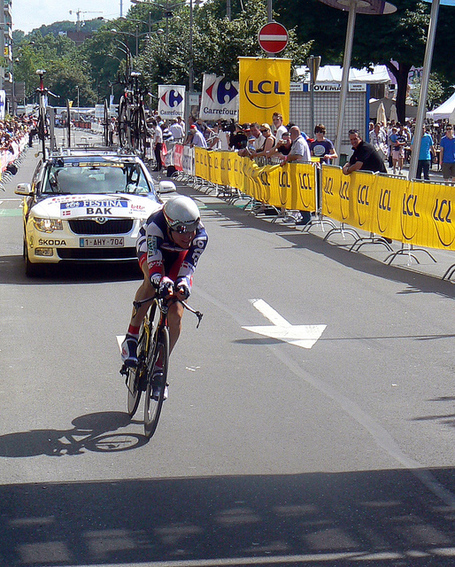 Of course, after about 15 minutes I got chastised by a cop. "Bridges are for walking, not for standing!" Fuck you, TdF. I made my back to the trainstation. I had enough. But hell, as I passed the 1k marker I noticed a free spot, so I stood there for the last few dozen riders, including this unknown kid who will never accomplish anything. 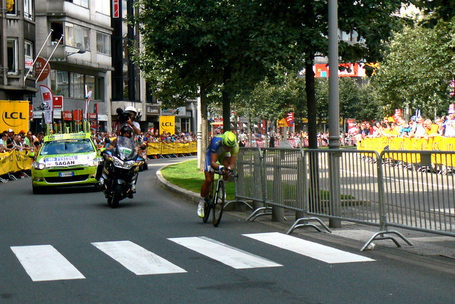 Immediately after Evans passed, I walked to the train station and I managed to take the first train back home. Good, cause, like the journey there, trains were once again packed, and as we passed the other couple of stations in Liège, we left dozens and dozens and dozens of people behind on the platform.

I was quite happy to be home, in the end.

All pictures by me.