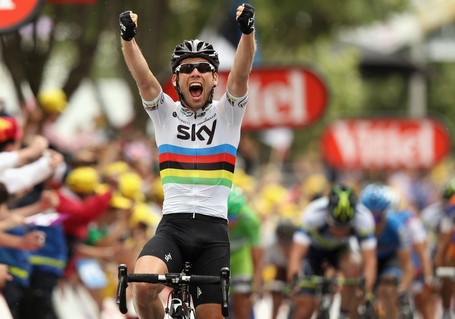 Mark Cavendish continued kicked off what promises to be a celebratory weekend for Team Sky with a dominant stage victory over Peter Sagan in the 18th stage of the Tour de France. With the top two spots in the overall classification firmly in the hands of his teammates Bradley Wiggins and Chris Froome, heading toward a time trial where those leads are all but certain to grow, Cavendish sent his own message to the world, as ominous as that the team has transmitted. A day after complaining on twitter that his leg was "swollen" from a mishap with a spectator, Cavendish got himself in perfect position, thanks to his illustrious team, and blew away his fellow sprinters from 300 meters out.

It was never going to be a day for the GC today as the 2012 Tour de France left the mountains for good, but there was plenty of doubt as to whether the sprinters' teams could or would catch the inevitable breakaway over rolling terrain. The answer was yes, but only in the final kilometer, and only as a result of some sub-optimal coordination in a group including Alexandre Vinokourov, Luis Leon Sanchez and Andreas Kloden. The sprint wound up inside the final kilometer after the maillot jaune himself drilled the pack to the back end of the breakaway before turning things over to super-domestique Edvald Boasson Hagen. Cavendish started his sprint a good 300 meters from the line, much further than usual, but seemed to benefit from the changeup in tactics and the presence of Sanchez and others still in front, trying to muster a sprint. None of them were a threat to hang on once Cavendish slalomed through their wreckage, nor could any of the other sprinters figure out a way to challenge him. The Manx Missile, reigning World Champion and odds-on favorite for Olympic Gold, crossed the line alone.

No changes in any other classifications today. The mountain points competition for the Tour concluded with the top two contenders sitting out the minor matters up ahead. So too did the points competition finish, more or less, with Peter Sagan too far clear of his rivals for anyone to catch him. The President of Fastvakia does need to make it to Paris to claim his prize, but he needn't do anything more than stay upright and make the time cuts. Obviously he will challenge Cavendish for the final stage on the Champs-Elysees, but he'll need something special to reel in the Manxman.

Tomorrow marks the last day of true competition for the yellow jersey, with Bradley Wiggins a virtual lock for overall victory, and the #1 favorite for the stage as well, a 53-km time trial. Little change is expected among the top five, given the gaps and the relative strengths against the watch, though you never know.