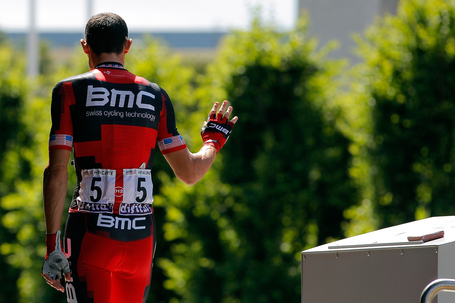 This year, the Tour de France has been a party for the youngsters. Peter Sagan and Thibault Pinot - the two youngest riders of the race - have an astounding four stage wins among them. Incredibly, Sagan is also carrying the green jersey for leader of the points classification into the final weekend with an unassailable lead.

But this tour, it is also memorable for serving as the last - either definitively or probably - for several veterans of the sport. Here is a quick look at four veterans likely on their last lap of France.

Known more for his reputation as the United States' best prospect for a spring classics victory for over a decade, George Hincapie is riding what may be his final Tour de France. A perennial threat to win the Tour of Flanders and Paris - Roubaix, Hincapie also holds the record for the number of Tour de France starts - 17 and finishes - 16 so long as he gets through the weekend unscathed.

Unusually for a dedicated Classics rider, Hincapie's career is defined only in part by his spring campaigns. Since 1998, he has also earned a reputation as one of the most valuable domestiques in the Tour de France. For seven years, he sheparded Lance Armstrong around France, at first shielding him from the wind and keeping him at the front of the peleton in the nervous flat stages that characterize the first week of the race and later even pulling his weight on mountainous stages. That Armstrong never seemed to suffer crashes in the first week, unlike several of his opponents, in the first week is telling of Hincapie's skill and power.

Hincapie has won only a single road stage in his countless appearances in le Tour, but he has been part of three winning TTT teams - in 2003, 2004, and 2005. His sole stage win came in 2005 when he out-sprinted Óscar Pereiro atop the Pla d'Adet climb after spending the day in the breakaway. Hincapie came close to a stage win the next year, finishing second in the Prologue in Strasborg to Thor Hushovd by a heartbreaking 0.73 seconds.

A mountaintop stage win combined with Hincapie's time trial prowess gave some U.S. fans hope that he would take up the mantle of North America's next challenger for overall victory after Lance Armstrong's retirement. In 2009, he finished 19th overall in le Tour, but he never turned into the overall contender for grand tour victory that some had hoped. Instead, he became one of the most sought-after domestiques in the peleton. From 2008-2009 he played an integral role in Mark Cavendish's leadout train, usually hitting the front one kilometer from the finish and stringing out the peleton so only two or three riders could challenge Cavendish. His leadout for Cavendish on the Champs Élysées in 2009 was particularly memorable. Suffering from a yet to be diagnosed broken collarbone, Hincapie brought the HTC leadout train over the top of a concerted effort by David Millar to put Garmin-Slipstream's Tyler Farrar in pole position in the final 200m with one of the greatest bursts of speed in the final kilometer of a race we have seen in a decade.

In the past two years, Hincapie has gone from leadout train conductor to shepherding Cadel Evans through the tumultuous early stages of the Tour de France. Two days ago on the stage to Bagnères-du-Luchon he escorted Evans across the line several minutes behind the other overall contenders. With retirement looming in August for Big George, it was one of the last selfless acts that have come to define his career.

The career of Vinokourov is unavoidably tainted by his positive test for homogulous blood transfusion in the 2007 Tour de France. After falling badly and injuring both knees in the first week of the Tour, Vinokourov appeared to have a miraculous recovery to win the first major time trial. Shortly afterwards, he won Stage 15, a summit finish in Loudenvielle. The next day, he was out of the race.

After a two-year doping suspension, he controversially returned to professional cycling and continued to display his attacking style. He won several time trials in 2009 but truly returned to form in 2010 when he won Liège-Bastogne-Liège, the Giro del Trentino, and a stage of the Tour de France. 2011 likely would have served up much of the same, but he fell victim to the infamous Stage 9 crash in the Tour which claimed a number of overall contenders. Vinokourov suffered a broken femur and was not expected to return to racing in 2012. Today, Vino was again in the late breakaway that almost survived but seemed to lack the power he once had.

Perhaps the man in professional cycling that needs the least introduction, Jens Voigt is completing what may be his final trip around France in July. While he has not committed to retirement after 2012, saying he may ride one more year, he is one of the oldest riders still competing at the highest level of the sport. Voigt's six young children must alsocreate quite an incentive to return home in the future.

Since turning pro in 1994, Voigt has won at least one race per year with a peak of 10 victories (stages plus overall) in 2001. Among those many victories are three stage wins in the Tour de France, all earned the hard way through long breakaways. Voigt was far from a stage hunter, though; he ably guided numerous GC contenders through the Alps and the Pyrenees, including Carlos Sastre and Fränk and Andy Schleck in his years at CSC. In the 2010 Tour de France, he memorably dropped out of the day's breakaway on the slopes of the final climb, the Col de la Madelaine, and paced Andy Schleck and Alberto Contador through several kilometers of the climb until the summit, helping them gain time on every other GC contender.

Outside of le Tour, Voigt was a strong threat to win any smaller stage race. He won the Critérium International a record five times and the mountainous Deutschland Tour twice, in 2006 and 2007. He also finished second in the 2005 Liège-Bastogne-Liège after, predictably, spending a large part of the race in a breakaway.

The oldest rider in this year's Tour de France, Voigt's age seems to be finally catching up to him. While he is still one of the most feared riders to have in a breakaway with oneself, his top end speed and power may be declining. In last year's Paris-Nice, he was a protagonist in a breakaway on stage one, which was narrowly won by Thomas De Ghent in front of a field sprint. Voigt finished sixth after being passed by the leading three sprinters. After the stage, he quipped that in the past, "I could have won that with one leg tied behind my back." He was in the breakaway that stayed away until the line on stage 10, but he was dropped in the final kilometer by a charging Thomas Voeckler.

Alessandro Petacchi is a true rarity - a sprinter who has remained focused on group sprints past the age of 35. Unlike his contemporaries who have turned their focus to the classics or domestique duties as Robbie McEwen, Baden Cooke, and Stuart O'Grady have, Pettachi has remained a one-trick horse for the entirety of his career. However, he does share one thing in common with riders like O'Grady; in his later years, his finishing speed has become dulled.

In his heyday, Petacchi was one of the greatest sprinters in the sport. He was built in a similar mold to Mario Cipollini and appeared the heir to the Italian sprinting legend's throne. Like Cipollini, Petacchi had a long and powerful sprint, often jumping with almost 300 meters til the finish and winding it up so fast nobody could come around him. He amassed a stunning 48 stage victories in the three grand tours, which is the third highest tally in the sport's entire history. In addition, he has won the points classification in all three Grand Tours.

While he is definitely losing his edge, Petacchi has still been able to pick up several victories this year, though only in smaller races. He has not announced his retirement plans yet, but with his speed gradually leaving him he is unlikely to race for much longer.