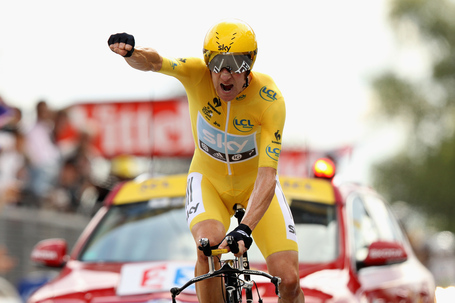 Bradley Wiggins of Team Sky punctuated his impending Tour de France victory with an utterly dominant performance in the penultimate time trial, a 53km ride from Booneval to Chartres. By winning Stage 19 with over a minute to spare over teammate Chris Froome, Wiggins has silenced any inkling of doubt about his place in this race. Gone are the doubts that a Briton would ever win the Tour. Gone are the doubts about which Sky rider deserved the top spot. Gone are any doubts about Wiggins' ability to stay strong in a three week race. All that's left is a parade into Paris tomorrow... and perhaps a showdown with Alberto Contador starting in 49 weeks or so.

The difficult course challenged a lot of riders today, but few changes resulted among the top ten. Defending champion Cadel Evans of BMC struggled mightily and surrendered sixth place to Haimar Zubeldia of Radio Shack, a tough way for the proud champion to go down. But he and his team can take pride in Evans' young protege, Tejay Van Garderen, who solidified his fifth placing overall in his second Tour de France. Only 23 years old, the Montanan (born in Tacoma, Washington!) is a lock to win the Best Young Rider competition in Paris, and will be a threat for Yellow someday at his current rate of progression.

Luis Leon Sanchez gave it a good effort at delivering another stage victory for Rabobank, holding on to the best time of the day until the final few minutes, when first Froome (narrowly) and then Wiggins (convincingly) bested his time. Wiggins exposed his emotions for the first time on the bike, throwing a ferocious right jab at the air, or maybe at his detractors, just after he crossed the line. Sky can brag about a lot this Tour -- nearly everything, really -- and today was no exception with Richie Porte adding a fifth on the stage to the top two spots.

Tomorrow the party will begin early for Sky, then take a break as they enter Paris and work toward getting World Champion Mark Cavendish one last punctuating victory, before hitting full swing. For the last three weeks, and maybe the next two, England rule the world of cycling.