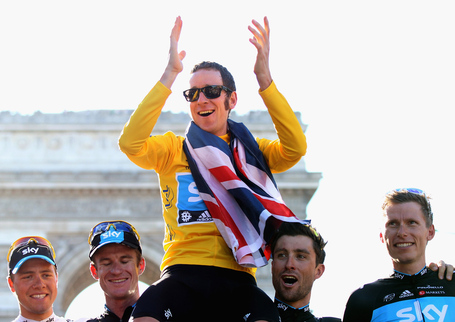 Mark Cavendish left no doubt who the champion of the sprints is today with a dominant sprint victory on the Champs-Elysees in Paris, as his Team Sky closed the 2012 Tour de France with a parade of champions. The World Champion, winning the final stage of the Tour in the rainbow jersey for the first time in history. Bradley Wiggins safely home in the yellow jersey, the first Briton in history to win the Tour de France. Chris Froome in second, looking all the world like a guy who has some grand tour success in his near future.

The streets of Paris were jammed for the final stage of the Tour, no doubt many of them coming by train from London to cheer on England's greatest moment in the sun in cycling history. Jens Voigt of Radio Shack-Nissan-Trek led a two- and then six-man breakaway over the final 30km of the race, the Paris circuits, seeking to disrupt the sprinters' party, but that dream ended for good with 3km to go, thanks to efforts by Sky, Liquigas, Garmin and Saxo-TInkoff, to name a few.

Wiggins took the second-to-last leadout pull, another sign of Sky solidarity and a rare sight of the yellow jersey working hard at the end of the Paris stage with one km to go. From there Edvald Boasson Hagen delivered Cavendish to the 500 meter mark, and the Manx Missile took over, launching his second heretofore uncharacteristically long sprint to the line, with the same result as stage 18 -- nobody coming close to beating him. Orica GreenEdge's Matthew Goss, frequently the race's second-best sprinter in the Tour, nearly took second again, passed at the line by the versatile and exciting Peter Sagan of Liquigas, closing fast but too late. Missing from the front was Andre Greipel of Lotto-Belisol, who along with Sagan authored three stage victories in this race, second only to Cavendish's four wins.

Chapeau to the Tour de France, to Bradley Wiggins, to Team Sky and to everyone here at the Podium Cafe who made the race so much more fun to watch, as always.