Share All sharing options for: Recipe for an Awesome Tour de France 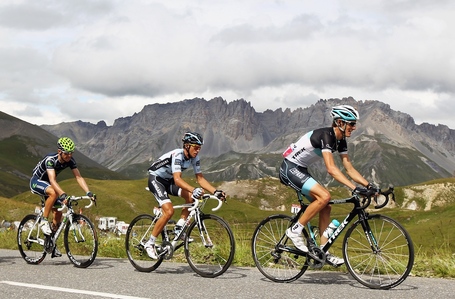 [At the risk of beating this subject to death...] Want real action at the Tour de France? Let's quickly sort through the options:

Of course, every year the favorites contain a mix of cronomen and mountain goats. Unfortunately, this year's mountain goats never got engaged. Andy Schleck was injured before the race, Robert Gesink and Wout Poels during it. Vincenzo Nibali was left in the role of climbing protagonist, and he did OK, but he isn't really that guy. Nor is Jani Brajkovic. Nor is Sammy Sanchez, who mooted the point by crashing out, as did Ryder Hesjedal. Much has been said of Froome, but contracts are unbreakable, regardless of what we might prefer. Guys like Leipheimer and VandeVelde and Valverde and Basso... not sure what to expect there anymore. Pinot was great, but unfinished. Rolland too, although he's getting closer. Dan Martin is also inching up the ladder with a very nice third week, but he too wasn't a threat in 2012.

What was left were a collection of guys whose strength lay more in the race of truth... but Wiggins was the absolute master of that discipline. Guys like Menchov, Evans, all of the Radio Shackers ... what chance did they have of producing fireworks in the mountains, so as to compensate for their solid-but-relative weakness to Wiggins in the time trial? None, that's what.

Which leads me to my point... bring back Alberto Contador!

Here are the elements of a reliably excellent Tour de France battle.

There are twitrumors of a climby course next year -- which seems like a logical semi-certainty, given ASO's tendency to mix things up and not serve up too many cookies to the existing champion. I am guessing they won't want to kill Wiggins either, so my money is on a balanced course that gives him a solid chance to defend, but nowhere near the distinct advantage he enjoyed this year from the second the course announcement was made. Give Bert a little love too, with some real HC MTFs, hopefully get several more real contenders into the mix, and you're looking at a cracking 2013 race.