Share All sharing options for: Olympic Men's Road Race: Can Cav Be Stopped? 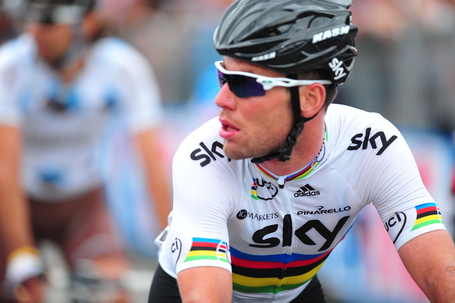 Britain's Mark Cavendish, the reigning world champion and unquestionably the fastest finisher currently riding a bike, will assume the mantle of Britain's most-discussed cyclist from Bradley Wiggins this week... and there's no telling when if ever he'll give it back. For now, this Saturday, comes the event we wait four years for, and the event for whose return England has waited 104 64 years. Or forever... when London hosted the games in 1908, there was no road cycling event, despite Athens having included the sport in 1896. In any event, Cavendish hopes to add his name to a pretty short list and become the 24th Olympic Men's Road Cycling gold medalist.

Should he do so, he will have absolutely reached the pinnacle of his sport for a sprinter. He'll have a green jersey in his closet back home (albeit from a year ago) and he'll have done what has never been done simultaneously, winning gold and rainbow. In fact, he'll join only Hennie Kuiper and Paolo Bettini as the only riders to win both at some point in their career. Granted, the two disciplines have only truly overlapped since either 1968 or 1972 (check me on when the Olympics opened the gates to professionals), so the list of gold medal winners is jarringly unfamiliar. But that only makes his potential accomplishment all the more special.

Cavendish's dominance at the Tour de France made it easy to write this article. Essentially, if you want to know who will win the race, you simply have to ask whether Cavendish can be dropped either in the climb-heavy circuits out on the Box Hill loop or whether a late breakaway on the run-in back to London can stay away. Both of these are decent possibilities. But if the bunch sprint materializes, well, technically lots of guys have a chance... right? Right.

First, some maps. Here's the full course. It consists of 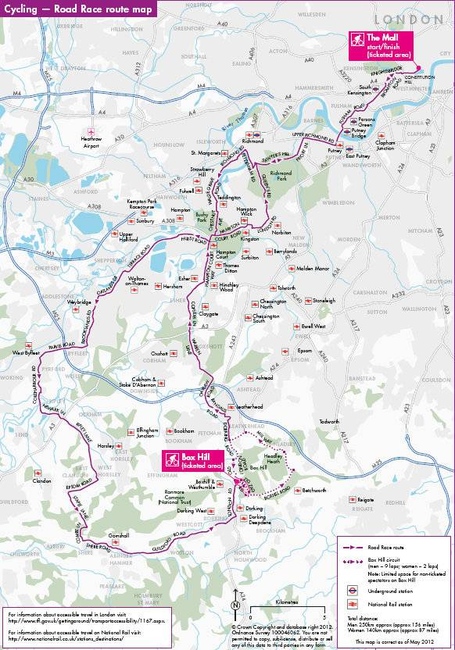 Here's a bit of a closeup on the Box Hill loop. It's tricky stuff. 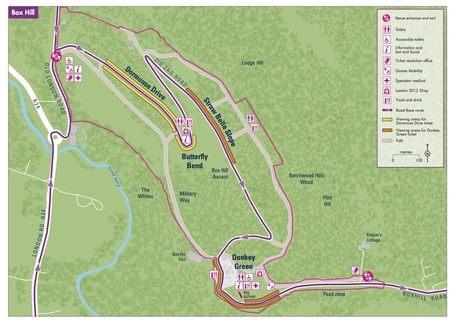 Or, if you really want to see what it's all about, a Podium Cafe delegation of thebongolian, maratsafin, addict, obelix and Albertina went out and previewed the circuit just two weeks ago. Their conclusion? You can get sausage rolls and tea there. Good to know.

The general conclusion is that the hill will be tricky and there's definitely enough umph there to drop a rider like Cavendish. Or, to put it in the phrasing of every team besides Great Britain, to drop Cavendish. Let's face it, these circuits will be all about shredding the elephant in the peloton. Cav knows this, as do his teammates, who include Wiggins, Chris Froome, David Millar and Ian Stannard. Which brings up another issue -- if you don't drop Cav in Box Hill, where he alone has to get over the climbs, how on Earth do you drop him on the run-in to Paris? Britain's team reads like a track pursuit squad, which it essentially is. The key, then, is to find not just one but a handful of teams who can take responsibility for drilling the race in the local circuits long and hard enough to shatter the peloton. And for that to happen, they have to have enough guys up front to stay away on the gallop home.

This tall task is undoubtedly going to fall to a few teams which are large and strong enough to make it happen. My quick take on who those will be:

Quality: If Matt Goss is feeling good enough to stay up front, then a team of Cadel Evans, Simon Gerrans, Stuart O'Grady and Mick Rogers could apply serious pressure. This is also a pretty proud, veteran group who know how to take responsibility.

Liability: If Goss can't hack it, they might not ride.

Quality: Being Belgian, they will ride. It's all they do. And they will not stop, ever... OK enough. The nice part about this team is that even if the high pace is hard for Boonen, they could have Gilbert and Van Avermaet in a lead group.

Liability: who's the captain?

Quality: Vincenzo Nibali likes to animate every race he's in, even when it seems pretty pointless. Pinotti and Paolini are guys who can be almost anywhere. In a climbers' escape, Paolini has enough of a sprint in him for Italy to consider riding all the way to London.

Liability: Viviani and Modolo are their finishers, and they're both very green. Nobody on this team stands out as a strong medal hope.

Quality: Unlike Italy, they have a guy who is perfect for this course: JJ Rojas Gil. Climbier than Cavendish, Rojas also knows he has to get to London in a reduced field to win. WIth Valverde and LuLu Sanchez you have guys who can drill it. And if Rojas can't hack it, Valverde can do the sprinting as well. Sanchez is everyone's pick for a solo attack if the peloton is intact heading to London. Great, versatile squad.

Liability: Can't really think of one.

That's the top tier, besides Great Britain of course. In fact, it's safer to call these guys Tier 2, after Team GB. Tier 3 has plenty more interesting names:

Who else interests you?