The Olympics are fast approaching and the cycling calendar speeds onwards towards fall, the Tour de France already becoming distant in the rearview mirror. For some, the transition to focus on other races is easy following a Tour where the GC battle lacked pizzaz thanks to Bradley Wiggins and his Team Sky's dominance. But while the GC racing may have been subdued, there are moments in the race that will continue to stand out in our minds. Here are four things I will remember well after the season ends. 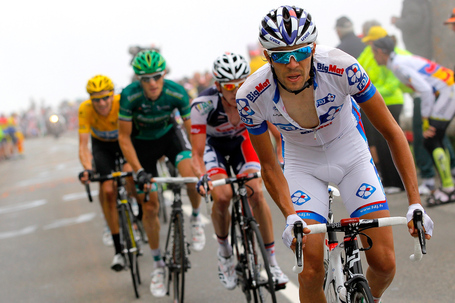 At first, the Frenchman - the youngest rider in the race - startled us with a stellar solo victory on Stage 8. On the final climb, the Category 1 Col de la Croix, he left his breakaway companions behind and made a lonely bid for the finish line. Lest you forget, he not only dropped Fredrik Kessiakoff - second place in the climbers competition at the end of the race - but closed a 55 second gap to the Swede on the climb.

The image of Marc Madoit screaming at his protégé from the team car, dangling perilously out the back window and nearly putting a dent into the side of the car with his incessant banging, is hard to forget. But such images will be repeated as various riders under his wing take flight. Pinot impressed on other stages, yes. He finished tenth in Paris, a surprise for not only a rider in his first grand tour, but also for such a young climber on a course designed for the chrono men.

Whether Pinot can make the transition from chance GC contender to a full blown podium contender in the next several years is still unknown. Unlike Thomas Voeckler last year, Pinot only netted 26 seconds over Bradley Wiggins and the other GC hopefuls in his stage win rather than minutes. But, also unlike Voeckler, Pinot finished tenth in Paris instead of fourth, though the course was none to kind to his strengths. However his career progresses over the following years, one image we will be unable to shake is his first, telling, stage victory this year.

The crash in Metz 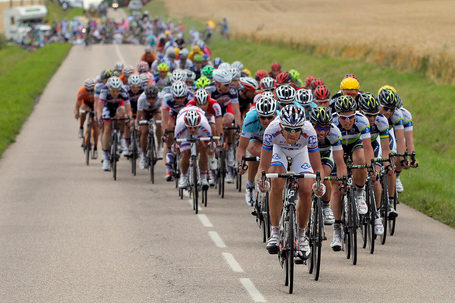 Crashes are one thing we prefer to forget, the dark side of our sport's constant flirtation with speed in close confines. But, they are inevitable. Sometimes, the result is minor - a scuffed jersey, a hood bent towards the inside, a bewildered look upon the face of a rider suddenly finding himself sitting in the middle of a ditch.

Other times, crashes define a race. Fränk Schleck broke his collarbone on Stage 3 of the 2010 Tour de France. Jurgen Van Den Broeck and Bradley Wiggins left last year's Tour de France with broken bones in the first week of the race. And this week, there was the crash on the roads leading towards Metz on Stage 6. Ryder Hesjedal and Tom Danielson were forced to retire due to their injuries, as were others. Robert Gesink was lost time and suffered injuries whose severity seemed more serious than a glance would indicate. Others lost time in excess of two minutes, limiting their ambitions before the real GC action began. In the end, the crash prompted a hundred "what if?"s. Try as we might, we cannot forget it. 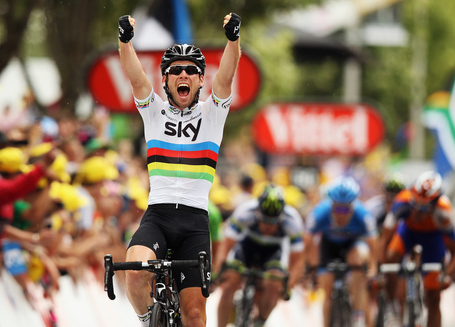 In the 2009 Milan - San Remo, Heinrich Haussler seemed assured of victory. A ten bike length margin with 200m to go seemed plenty to stave off the sprint that was just beginning to open up behind him. Indeed, Haussler finished a massive two seconds ahead of the bunch sprint behind him... save one man. With an unforgettable and superhuman burst of speed, Mark Cavendish started his sprint and caught Haussler on the line.

The final 300m of Stage 18 brought back memories of 2009. A mixture of riders, half who had been away all day and half going on the attack in the final fifteen kilometers of the stage, charged towards the line as rain drops began to coat roundabouts in a greasy varnish. Behind, Bradley Wiggins and then Edvald Boasson Hagen drug the peleton towards the impetuous breakaway that simply would not die. But when Nicholas Roche accelerated with 500m to go with Luis Leon Sanchez on his wheel, the catch was in doubt.

Cavendish reacted instinctually, launching his sprint 300 long meters from the line - an eternity for a sprinter. Had he not, Roche and Sanchez stood a chance of winning the stage. Instead, they were passed 100m from the line by a rainbow-striped blur going at least 15kph faster than them. Such was his speed the two stopped sprinting, seemingly astounded at the void he left behind him and expecting a flurry of other riders to speed by. Only after a second did they realize his gap was so large, the other sprinters so embarrassingly distanced, that they stood a chance at finishing on the podium of the stage. 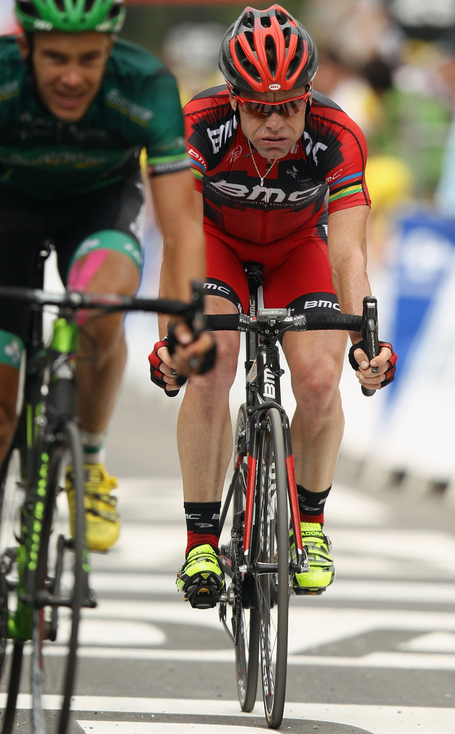 Some Tour de France defenses crumble slowly. A former champion loses seconds here and there, gradually ceding time to a superior rival. Some never appear, a win is branded a fluke, a product of the thirty minutes gained in a breakaway no team wanted to chase. And sometimes, the inexplicable happens. All of a sudden cracks appear on the edifice of a strong defense.

The latter happened to Cadel Evans on Stage 11; the Australian who looked at least equal, perhaps stronger, than Bradley Wiggins on the first summit finish conceded several minutes on the climb to La Toussuire after playing protagonist earlier in the stage. Though the sight of Tejay van Garderen - clearly on a good day - dropping back to pace Evans will stay with us, the sight of Evans dropping backwards out of the group of GC contenders on the penultimate climb is seared into popular memory. Leadership of BMC appeared to have shifted on Stage 14, when van Garderen passed by Evans - stopped on the side of the road with a flat tyre - without as much as slowing. But the seriousness of the situation became clear on Stage 17. Evans allegedly suffered digestive issues that day, but the cause of his performance is less memorable than the sight of a dejected champion crossing the finish line. Whether this was the slow progression of age to rob Evans - already the oldest winner since World War II - of his winning capabilities or simply an off year is unknown and is surely a question that will persist until next July.