Share All sharing options for: Consumed, by Jonathan Budds 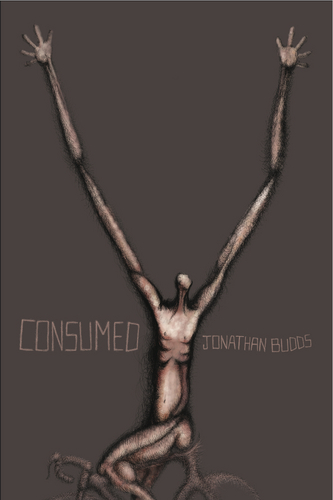 Title: Consumed
Author: Jonathan Budds
Publisher: Jonathan Budds
Year: 2012
Pages: 293
Order: consumed-novel.com
What it is: A modern horror story set in a cycling milieu.
Strengths: Budds's depiction of the Eastern European home of his hero is blackly humorous.
Weaknesses: The pacing is rather flat and Budds has a habit of introducing characters and then forgetting all about them.

Jonathan Budds's Consumed is self-published modern horror story set in a sporting milieu. The sport happens to be cycling. Making Consumed something like An Armenian Werewolf in the Peloton. But the hero, Romain Mariani, is no werewolf. Nor is he Armenian. But - Irish and all as that seems - let's say that it's in that rough territory.

Twenty-six going on twenty-seven, Mariani comes from one of those Eastern European countries few had heard of until the Wall came down and the Iron Curtain rusted away into nothingness. A country with a football team ranked below he Solomon Islands, where life expectancy is ranked just above Haiti. The sort of country you see in Bella Tarr's films. Cold. Dark. Misshapen. Impoverished. Still dragging itself into the Twentieth Century. This is a dark, dystopic world.

Mariani starts the novel as the world's sixty-third best road racing cyclist, a member of the Gazin-Ségur PMP squad. Sixty-two places above him is Hans Banquo: Herr Wonderschön, Hansi the Conqueror. The winner of seven Grand Tours, three of them French. A real man for all seasons, with Paris-Roubaix on his record too.

Six years into his pro career Mariani's own palmarès is not overly impressive: top tens in Milano-Sanremo and the Flèche Wallonne in his neo-pro year, a stage in Paris-Nice and two steps off the podium in the Giro d'Italia the following year, followed by little else worth writing home about, save a top twenty in the Tour de France the previous year. Still, he's the sort of rider who can attract a €25,000 personal sponsorship deal from a Belgian brewer of non-alcoholic beer and have groupies knocking on his hotel-room door. His is a comfortably uncomfortable life.

Consumed opens somewhere in the Pyrénées with Mariani 1'51" off the leader's jersey on the penultimate stage of L'Essence du Tour, a new end-of-season short stage race built around some of the Tour's iconic stages. Winning L'Essence would elevate Mariani to being the world's twelfth best road racing cyclist.

A few months later - still within the first sixty pages of the novel, now into the off-season - Hans Banquo turns up on Mariani's doorstep in Çigi one morning. The two go for a ride. Banquo offers to anoint Mariani as his heir apparent. At which point something happens to shift Consumed's axis and we don't really get another bike race until the closing pages of the novel. Mariani enters a new world. And emerges a changed man. Much of Consumed then is about the central character making a decision and learning to live with the unintended consequences. Let's say we've entered the territory of horror films like The Fly.

An obvious cycling-related antecedent for Consumed is James Waddington's Bad to the Bone. That was a book very much of its time - the late nineties - and had something to say about cycling's relationship with doping. While doping plays an important role in Consumed it would be unfair to suggest it is about the sport's current relationship with doping. Like the teleporter in The Fly, doping here is merely a means to an end.

How horrifying is the world into which Mariani is thrust? That - like curries - is a matter of taste. Some may be made uncomfortable by the depths to which Mariani descends, others will find them a tad tame. Me, I'm very much in the latter camp and would have preferred it if Budds had made full use of the potential of his scenario by amping the horror up to its max.

As a read, Consumed's a little flat-footed, the pace rather pedestrian. The other problem with it is the characters: Budds has a habit of creating characters and then just tossing them aside, not using them to their full potential. This is particularly true of the few cyclists who pop in and out of the story but I'm also still trying to work out what became of the father of Mariani's girlfriend who one moment is a major mover in the story and the next just shuffles off the page and isn't heard of again. The whole thing needs a bit of tightening up.

On the plus side Budds's depiction of Mariani's Eastern European home is blackly humorous and in the book's final pages he comes up with some scatological descriptions of Mariani's rivals in the novel's second race (which happens to take in the roads of Box Hill). If you're looking for a mild scare before bedtime and you want a story set in a cycling world, Consumed's just about worth the effort.