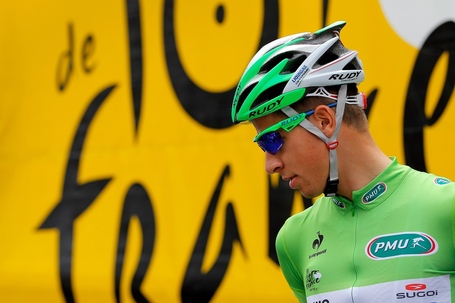 On Wednesday, scientists at CERN, the European atom-smashing social media sensation, are expected to announce that they have all but confirmed the existence of the so-called "god particle." Known to scientists as the Higgs boson, observation of the particle is expected to give scientists a much better understanding of how matter achieves its size and shape. Confirmation of the Higgs boson doesn't change the universe so much as increase our knowledge, but the elusive particle's discovery is a momentous occasion. Scientists have long wandered the wilderness of subatomic particle theory like Odysseus looking for a way home, a way to confirm the existence of the Higgs boson particle. And now, in a lab on the French-Swiss border, perilously close to the routes of the Tour de Suisse and Tour de France, right here in early July, the peak of the cycling season, they are set to announce the greatest discovery in possibly all of human history. Which raises the question...

Tomorrow's announcement tracks perfectly with the rise of Sagan, the Liquigas victory machine, the President of Fastvakia, a phenomenon who has until just now defied scientific understanding. It's all just a little too perfect to ignore or slough off as a mere coincidence. Let's put on our science-y hat and take a good hard look at the similarities and differences. Also, I will call in an actual scientist (Jens or Drew, or maybe Jimbo) to confirm these observations. You know, for their validismness.

Similarities Between Peter Sagan and the Higgs Boson Particle

No scientific postulate would be worth its chops if it were written by a fish lawyer weren't tested with counter-evidence and theories. So with that in mind, I can admit there are a few troubling questions. For starters, the Higgs boson particle is more or less everywhere. Literally. That includes in Mark Cavendish's legs. Can Peter Sagan be everywhere? No. For example, he cannot be second, third, fourth or any lower position in a sprint when he puts his mind to it.

Jens suggested that the Higgs boson particle has a far greater mass than its fellow particles, raising the possibility that perhaps a larger rider like Johan Van Summeren is the Higgs boson particle. Finally, the nature of the particle hasn't been understood well before now, but its general existence is no surprise, going back before 1989, when Sagan was born. To trace it to Sagan, then, would require some way to define what Sagan was prior to his birth. Nothing can be ruled out, but it raises both scientific and philosophical questions that are not easily answered.

FIne. No question of this magnitude can be just wrapped up in a neat little ball. But ask yourself this: can you prove that Peter Sagan is not the Higgs boson particle? No. You cannot. Case closed.