Tour de France: Winning and Losing on the Road to Boulogne sur Mer

Share All sharing options for: Tour de France: Winning and Losing on the Road to Boulogne sur Mer 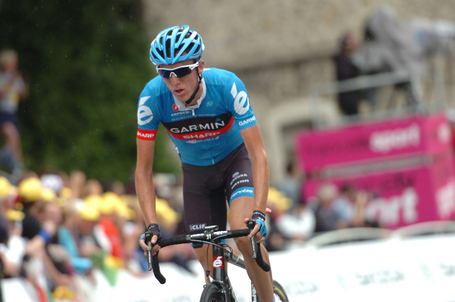 Dan Martin rolls in over 5 minutes down on the winners after a crash. Copyright Fotoreporter Sirrotti

Today's stage took a page out of the book of the classics. The racing started in Orchies, home of one of the more infamous secteurs of cobbles in Paris-Roubaix, and traversed a lumpy path west towards the English Channel. Narrow, twisty, climby roads were where the final 100km took place, bringing back memories of Liége-Bastogne-Liége.

The classics are known for the exploits of those who thrive in their demanding environment but also for the bad luck that befalls upon the less fortunate. Danger lurks on every narrow road, curvaceous downhill, and rough road. Racing always entails perils, but they are amplified greatly in the classics. Positions lost, gaps opened, broken bones - these are the risks. Today, we were reminded of both sides of the classics.

First, there was some splendid racing today. These stages designed to be like the classics? They rarely disappoint. Things started off with another breakaway. Surprise! Michael Mørkøv was in the breakaway! If you're counting, that is three days in a row Mørkøv has been in the break. With Alberto Contador sidelined with a doping suspension, Bjarne Riis was feeling pretty glum, but the TV exposure he has gotten for his sponsors after 3 days in the break and 3 days in the Malloit a Pois surely must be making him feel better.

Can anyone remember the last time someone was in the breakaway du jour three days in a row? Especially the first three road stages of le Tour where competition can be especially fierce to get in it? If he keeps this up, Mørkøv may out-Roy Jeremy Roy. Roy was in half the breakaways last year, it seemed. It was a fascinating story to watch unfold as the young frenchman tried over and over to get that elusive stage win. The storyline of Mørkøv's search for the spotted jersey is beginning to get the same vibe. Mørkøv, he likes the breakaways too - remember him off the front in Flanders and San Remo? If he's not careful, he'll rack up the most kilometers up the road in this year's Tour. I, for one, am crossing my fingers he does, and only partially because I want to see more of that buttery smooth pedal stroke of his.

But, the stage was not ripe for breakaways with several stars laying in wait licking their chops at the thought of the 700m uphill finish. Peter Sagan, Cadel Evans, Phillipe Gilbert, Michael Albasini, and Oscar Freire have all had this stage circled on their calendars for months. So, Mørkøv and his companions were brought back, only for Sylvain Chavanel to fire off the front with just over 5 kilometers to race. Really, could this have been any more predictable? But Chava, he showed some tactical nous, attacking into a corner at the top of a climb, gapping everyone else through the corner and then getting some respite on the long downhill that followed. While Chava was undone by mis-judging a corner with 2km to go, losing all of his precious momentum, he certainly made many of us smile. He always knows how to please.

Then the sprint? Oh my oh my, that Peter Sagan was the winningest of all. When was the last time you can remember Edvald Boasson Hagen being distanced by over a second in an uphill sprint like this? Phew. I haven't seen that kind of domination in a while. And to make it all the more special, Sagan shared not one, not two, but THREE victory salutes with us.

Sadly, the day had a dark side too. The rain fell on the twisty roads of northern France today, causing numerous crashes. The largest came with just over 30km remaining. Seemingly the entire Garmin-Sharp team hit the pavement with the exception of Ryder Hesjedal. Vande Velde, Dan Martin, Tom Danielson, and Tyler Farrar all lost major time. If Vaughters wanted to let the road decide who would be the GC leader for this year's Tour, this is surely not what he envisioned. Hesjedal ends up in the leaders' role by default now, though Vande Velde is only 2 minutes down and could still aim for a top-ten overall. Dan Martin? A saddening 5:05 behind on the day. Danielson came off the worst, suffering a separated shoulder that threatens to put him out of the race. The list of GC hopefuls who have had crashes also includes Tony Martin, who lost time again today.

Others lost out too. Simon Gerrans and Philippe Gilbert, two favorites for today's stage, were caught up in the race. Gilbert broke his shoe and had to wait for his team car to give him another. One can't help but feel bad for Gilbert, as this was his last great opportunity at a stage win before he turns gregario for Cadel Evans.

Poor Thomas Voeckler lost out too, coming in 7 minutes down, but one can't help but think that he is relieved. Living up to the expectations placed on him after finishing fourth last year was always a tall order, especially with more chronos and less question about his ability to ride for the overall. Now, Voeckler can go back to doing what he does best, tongue hanging out while he grimaces his way through breakaways and to stage wins.

Even more crashed. JJ Rojas and Kanstantsin Sivstov were unable to finish, the latter suffering a broken Tibia, while Maarten Tjallingii finished the stage with a broken pelvis (!!!) and will not start tomorrow. It seems searching for the drama of the classics always has trade-offs.