Share All sharing options for: Olympic Men's Road Race: The Kids Are Coming 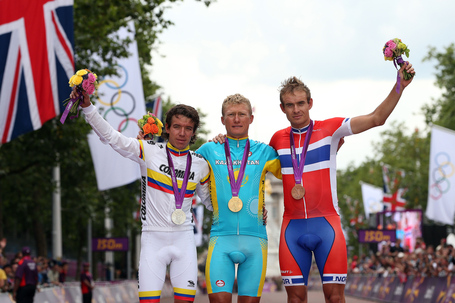 Alexander Vinokourov is a veteran of the cycling world at 38, which certainly helped him win the Olympic Road Race on Saturday. His tactical guile, honed by well over a decade of racing at the top level, was on display as he first attacked in the final 10km and then dispatched his breakaway companion in the sprint by taking advantage of a lapse of attention with 200m to go. In second place was Rigoberto Urán, 25 years of age. In third, Alexander Kristoff, also 25. Fourth place was occupied by someone even younger, Taylor Phinney, aged 22. Though all talented cyclists, it is uncommon to see so many young faces at the top of the results sheet in a long and prestigious one-day race like the Olympics.

The olympic road race was 250km long, over an hour in excess of the "200km barrier" many younger riders seem to face. It takes years to build up the stamina to compete for over six hours, especially on demanding courses like this year's Olympic circuits of Box Hill. This is why young winners of Gent-Wevelgem are often not the same riders on the podium of the Tour of Flanders a week later. When young riders do succeed at this level, it grabs our attention for this very reason. So, who are these kids, and where might they go in the future? 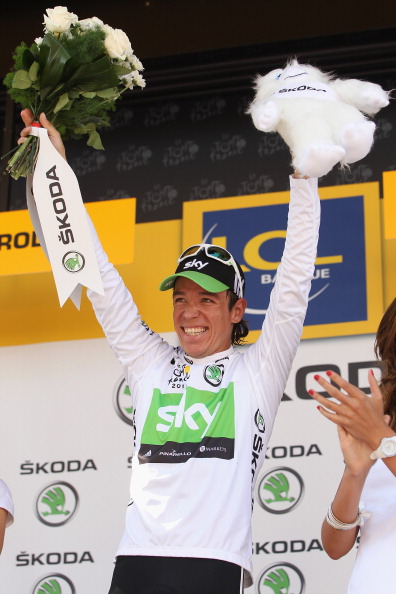 Though he is a mere 26 years of age, Urán has been a professional for 9 years already. You read that correctly, he turned professional when he was 16 years old. The decision stemmed in part from the circumstances Urán faced growing up - his father died at an early age, a victim of the violence stemming from the conflict between the FARC rebel group and the government and right-wing militias and his family needed extra income. While riding for a local professional team in Columbia, he racked up several national championships on the track in the junior ranks, including the points, pursuit, and scratch races. Until the final 400m when he inexplicably drifted to the center of the road, Urán looked exactly like a track rider, sticking close to the barriers as he waited for Vinokourov to start his sprint.

At age 19, Urán moved to Europe to turn pro with Tenax. In the following years he rode for Unibet and Caisse d'Epargne before joining Sky in 2011. Each year showed promise. In 2007, he won a stage of the Tour de Suisse and finished 9th overall. In 2008, he was second in the Volta a Catalunya and third in the Giro di Lombardia. The next year, fifth in the Tour of Romandie was the highlight of his season, followed by a 7th overall in Suisse in 2010. 2011, however, was the year Urán really took off. He was fifth in Catalunya, fifth in Liège-Bastogne-Liège, and third in both the Giro dell'Emilia and GP Cycliste de Quebec.

Urán's strengths seem to be twofold. He is a very capable stage racer, especially in shorter events, though his 7th in the 2012 Giro indicates he may have the legs to chase Grand Tours in the future. But hidden in his palmarès is a string of strong finishes in one-day races. He is a climber, but not in the mold of Andy Schleck. Instead, he is compact, packing roughly the same mass as Schleck in a frame five inches shorter. This makes him more explosive, as he showed this year by winning Stage 4 of the Volta a Catalunya this year with a strong sprint, distancing none other than Samuel Sanchez, who is known for his finishing speed. He came close to a stage win on Stage 2 as well, finishing third in a select sprint of 31 riders. With his explosive climbing and fast finishing speed - especially paired with instincts honed by racing the points and scratch races on the track - he is likely to win Amstel, Liège, Lombardia, San Sebastian, or one of the new Canadian one-day races in the near future. My money is on him winning more than just one... 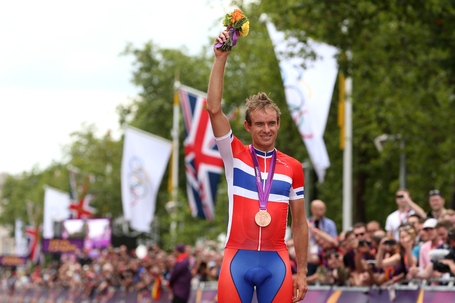 Not many riders beat Thor Hushovd in a sprint. Especially when that sprint is from a breakaway and the rider in question is only 19 years old. Yet, that is exactly what Alexander Kristoff did in 2007 to win the Norwegian National Championships road race.

Having a good turn of speed is relatively uncommon in riders who make it to the professional ranks. Every year, we seem to discover two or three up-and-coming sprinters who seem destined to overthrow the reigning champions. But having the same turn of speed at the end of a long, hard race is different, a trait that is telling more of the rider's physical strength and resilience than pure speed. These traits seemed to be on display in the sprint for the bronze medal at the Olympic road race as Kristoff distanced his nearest competitors by several bike lengths.

Though Kristoff seems to have the capabilities for good results in hard one-day races, his results are sparse so far. He has twice won the Norwegian National Championships, and finished third in the Philadelphia International Championship and fourth in the Vattenfall Classics in 2010 while riding for BMC. Now on Katusha, he has only secured one other victory this year - Stage 3a of the Three Days of De Panne.

Performances at De Panne, however, tend to underlie potential to perform well in the cobbled spring classics. The course traverses over a number of steep climbs - many cobbled - in the same region of Belgium where the Tour of Flanders, Gent-Wevelgem, and other more prestigious spring races traverse. Stages 1 and 3 this year had climbs in the finale that may not have definitively split the field, but definitely took the snap out of the legs of some of the purer sprinters Kristoff dispatched. Do I sense a future winner of Gent-Wevelgem? I just might. 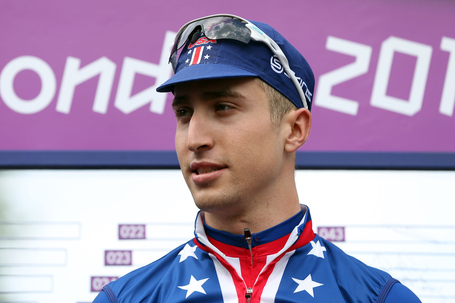 If one up-and-coming rider needs no introduction, it is Phinney. The son of two former Olympians - Davis Phinney, a fearsome sprinter on the road, and Connie Carpenter, a speed skater turned cyclist - Taylor has been racking up World Championship medals since his days as a junior. His early results came on the track in the pursuit as well as in time trials on the road, but his arsenal is broader than that.

In 2007, Phinney was the Junior World Champion in the time trial. In 2008, he took gold in the Individual Pursuit in the junior ranks, a feat which he would repeat the next year in the senior ranks. In 2010, Phinney narrowly beat Levi Leipheimer in the United States National Championships in the time trial with a winning margin under a second. Predictably, Phinney once again took a gold at Worlds in the time trial that year, this time in the U-23 race. He was just getting started.

Widely known for his love of the pavé, Phinney won back-to-back U-23 versions of Paris-Roubaix in 2009 and 2010. He has taken time trial stage wins at the Tour of Utah, Tour of the Gila, Eneco Tour, and now the Giro d'Italia. And let us not forget that he finished a stellar 15th in his big boy Paris-Roubaix debut after working extensively for his teammates Alessandro Ballan and Thor Hushovd early in the race. It seems only a matter of time until he is on the podium, and with the powerful sprint he inherited from his father, the odds of it being the top step are high.