The Price of Gold, by Marty Nothstein

Share All sharing options for: The Price of Gold, by Marty Nothstein 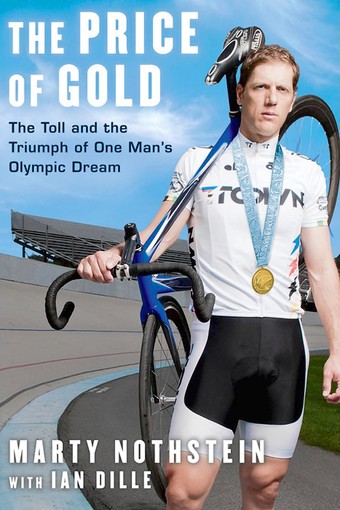 At the 1996 Atlanta Olympics Marty Nothstein narrowly missed out on a gold medal in the match sprint. Four years later - after dedicating himsefl to one single objective - he brought home a gold medal from Sydney. With the London Games' track programme about to commence, Don Salamon takes a look at Nothstein's new biography.

Title: The Price of Gold - The Toll and the Triumph of One Man's Olympic Dream
Author: Marty Nothstein
Publisher: Rodale Press
Year: 2012
Pages: 256
Order: Rodale Books
What it is: The candid, stream-of-conscious insight into Marty Nothstein’s gold medal quest.
Strengths: Gives insight into just how brutal track racing can be, along with a stark view of the reality of the world as a champion believes and sees it.
Weaknesses: This book is told in a very matter-of-fact, almost surgical, way.

"The event in which I specialize, match sprinting, is the equivalent of the 100-meter dash, on bikes. Two racers go head-to-head on the track over three laps, the last 200 meters of which is timed. The first one across the line moves on to the next round of the sprint tournament. The loser goes home."

Marty Nothstein has conquered almost everything there is to conquer in track match sprinting. His grit and determination are legendary, as is his laser-like focus in preparation. After missing out on gold in the 1996 Olympic games in Atlanta, Marty’s quest for the elusive medal become his singular focus in his life around which everything else revolved. In addition his ego was as equal in size to his palmarès in track cycling, seemingly a requirement in an event where two people meet to determine which one is the strongest. This pressure cooker of a environment only becomes more intense as one examines the highest levels of the sport, and in this case the most vicious of the events in track, in Nothstein’s own expert, and biased, opinion.

The Price of Gold jumps around key moments in Nothstein’s life starting with his glacial upbringing in Pennsylvania. Additionally, a quick examination about what track racing is and the spirit of how it has been for the last 100 years is touched on with a mixture of comparison to tradition and youthful rebellion. So what exactly does this mouthful mean? According to Nothstein, track cyclists were not guys you would want to piss off. Large and (at times) angry, some of them were known equally for their exploits on the track, and their infamy in raising hell out in town. Fortunately, Nothstein was mentored and calibrated into not making some of the same mistakes as others and was set on the right path. He started his nascent career in the BMX world and transitioned to track cycling after one of the many minor incidents of his youth. Early on he gained a reputation of strength and aggression on the track which, naturally, was rewarded with winning.

Interestingly. Nothstein, seems at odds for his loses, either accepting that he was beat by better competitors who were just stronger, or that he didn’t take the event seriously enough to warrant committing every part of his being. As he gets older, maintaining the facade of control was important to him, and it fits in line with the mentality of striving for perfection. This culminates, in my opinion, with his refusal to defend his Olympic title. He will forever be a sitting champion of gold in his mind because he will never have had the chance to be beaten.

The Price of Gold will probably appeal to track cyclists, and those with tangential exposure to the sport. However, it could be inaccessible to some who are turned off by the turbo-charged, ego-centric writing; and those wholly unfamiliar with track cycling as the level of explanation about the rules and culture of track cycling is only rudimentarily touched upon. The book’s main strength is that we have an accurate picture about the mentality of a World Champion, and the level of self-belief, and self determination it takes to get there. Quoted in a Cycling News interview Nothstein believed that at the end of a Classic, roughly 250 kilometers in length, who would cross the finish line first between himself, Armstrong or Cipollini his answer reveals the reality he subscribes to: Marty Nothstein.