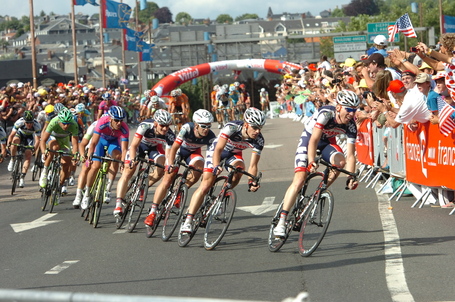 Andre Greipel scored his second career stage win in the Tour de France, following his Lotto-Belisol train across the Seine River and timing his jump perfectly, holding off Lampre's Alessandro Petacchi and Tom Veelers of Argos Shimano for the win. World champion Mark Cavendish of Sky crashed heavily (without injury) with 2km to go in a huge pileup that split the peloton and reduced the favorites, including Tyler Farrar of Garmin-Sharp. Greipel and his train were up ahead, unaffected, and seized the opportunity in Rouen.

Today was a true flat stage, running along the beautiful coast of the Somme Department to Rouen. Anthony Delaplace was in the breakaway again, with David Moncoutie and Yukia Arashiro, tracked down in the final 5km. Sylvain Chavanel launched a late attack to gain the yellow jersey, but the road wasn't there for him, not even with a short climb at the 6km mark.

The crash which determined the stage outcome came at the 2km mark, inside the 3km "crashes don't count toward time gaps" limit, enabling the victims to collect themselves and roll home at their leisure. The culprit was a thick pack, heading from a wide road to a narrowing spot, and the almost inevitable touch of wheels. No injuries were apparent at press time.

No changes to GC today, but Sagan's ability to stay in the sprint aided his Green Jersey cause, and a couple more stages without victory could push Cavendish out of the race and into Olympic training mode.