One of the things I'm really enjoying about this year's Giro is that it's easy as pie to be cheering for all the riders who are winning the stages. Yes, yes, if you know me, you'll know I've got about 500 very favourite riders, but I'm always really happy to see riders do well who've come back from a rough couple of years, like Tiffany Cromwell, who won yesterday, with a 107km solo escapade - or who've come back from injury, like today's winner, Shelley Olds.

I'll tell you more about her, and about the stage, below the jump - but before that, here's a Tuttobici audio interview with her after the race. And of course, there'll be video added as we find it, links to photos, blogs, and everything else, in the article and in the comments. And if you'd like to ask questions, or chat about all things women's cycling, join us down below! 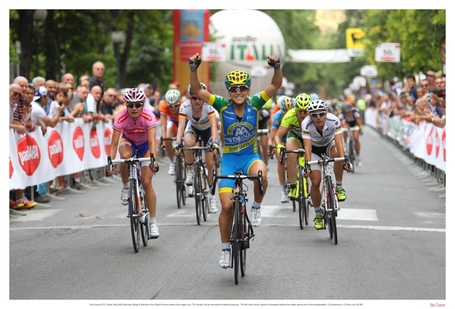 15m video of the stage (longer version of this below)

It hasn't been the greatest couple of years for Shelley Olds. She got into cycling after riding a tandem, and started off as a trackie, specialising in the Points race, but after the race was dropped from the Olympics (boo!) she turned her focus to the road, because what she really, really wants is an Olympic medal. She won the final stage of the 2010 Giro, but 2011 was dominated by crashes, the first part of her season written off by a crash in the Ronde van Drenthe.... she came back, and almost immediately had to pull out of the Giro, after it turned out a crash in the Nature Valley GP had cracked her rib. THIS year, she started well, but broke her wrist in a crash in the GP Elsy Jacobs.... and then came back to win the ChongMing Island World Cup! We'd wondered how she'd get on in AA Drink-Leontien.nl, which has three super-sprinters in Olds, Kirsten Wild and Lizzie Armitstead... and it seems like the answer is she's having a great time!

Full 50 mins video of the stage:

So, how did the race pan out today? Well, the stage profile looked like it could go any way, 109km of lumpy roads, with opportunities for escape, and the peloton certainly went all out for a breakaway. Olds started strongly, winning the first intermediate sprint, and then at km20 was one of 13 riders who launched an attack, with Lauren Kitchen & Liesbet de Vocht (Rabobank), Shara Gillow & Loes Gunnewijk (Orica-AIS), Marta Bastianelli & Susanna Zorzi (MCipollini), Lise Nøstvold (Hitec), Jennifer Hohl (Faren Honda), Inge Cilvinaite (Diadora), Simona Frapporti (Be Pink), Valentina Scandolara (Michela Fanini) and Lisa Brennauer (Specialized-lululemon). Looking at the names in that group, I'm surprised that by 40km, they'd only got 35 seconds on the chasers.... but then it turns out not all of the riders there were hoping it would make it, as the maglia rosa, Marianne Vos, was on the front, driving the chase with World Champion Giorgia Bronzini (Diadora) and former World ITT Champion Emma Pooley (AA Drink). At 50km, as the lumps in the road were really kicking in, the lead was down to 17", and by km 52, the peloton was all back together.

From here on, it became obvious that the sprint teams, robbed of a stage yesterday by Tiffany Cromwell's audacious solo effort, were not going to let any attack get away, and the pace was so high that despite various, continual attacks, no one could escape, and it would be down to the bunch sprint to provide the Fourth of July fireworks!

Yes, yes, I know it's the height of cliché to be making Independence Day jokes, but it's got to be done, when an American wins on the 4th! Racing up the slightly uphill finish, Marianne Vos started the sprint early, but Olds was tucked into her wheel, and ready to overtake her for an incredibly strong win.

Here's the 6 minutes Giro Donne video, with Olds having fun with fizzy wine on the podium, and an interview with Giorgia Bronzini:

The jerseys stay the same - Vos in pinkand points, Pooley in mountains, Elisa Longo Borghini in the white of Best Young Rider, and Fabiana Luperini in Best Italian blue.... but tomorrow, everything could change.

Stage 7 starts out innocently enough, but then hits one of those serrated types of profiles, culminating in a 300m climb and descent. In his race preview, Monty described it thusly:

For stage 7 we move deep into Lombardia, and even deeper into breakaway territory. The finish line at Castagnole delle Lanze is barely 150m higher than the start at Voghera, but between the two there is scarcely a kilometre of flat ground. And anyone who can get a decent lead by the top of the cat 2 climb at Camo, just 10km from the end will have more than a good chance of staying away for good. The final km passes through such a narrow twisty alley that the chase will be done almost blind.

This is a big chance, so expect to see the GC candidates putting on the pressure - and especially Orica-AIS, who, with three riders within four and a half minutes of Vos, will have nothing to lose from attacking like crazy.

Meanwhile, find out more about today's stage by watching Amber Pierce of Diadora discuss the stage on her daily Q&A on the Fuji Bikes Facebook app at 21:30 CEST, 8:30pm BST, 3.30pm USA Eastern and 12:30pm USA Pacific. WomesCycling.net have a race report and will have photos here, and while it's not about today's stage, check out Shelley Olds' blog on the race up to yesterday on the AA Drink website.

Thoughts for the day go to Specialized-lululemon's Clara Hughes, who didn't finish today. She'd blogged yesterday about how much the heat was hurting her, so I hope it's just that the team felt she's done more than enough, and she's all OK. My hope is that right now she's sitting somewhere cool, with a long, cold drink, relaxing knowing she's worked her heart out for her team and done a fabulous job!

As always, please add anything you see into the comments - and come back for video, interviews, fun tweets and anything else the combined genius of the Café can find!