EDIT: Thanks to Lurker McLurkerson for creating the Zombie Maurice Garin, and to Drongo for pointing out where he came from in the comments below. 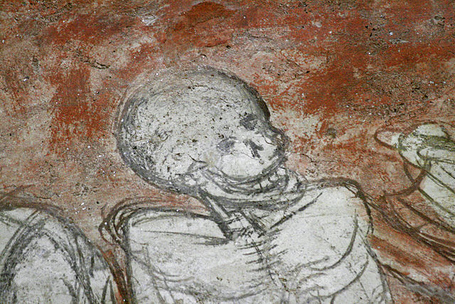 Very early this morning, I woke up to the distinctive gurgles and beeps that mean someone is attempting to Skype me. I stumbled over to the computer and checked the screen. "ZoMG? Who the hell is ZoMG? I’m not even young enough to know what that means."

I sighed. "English, please. Despite what my son told his preschool teacher when he was four, we do not speak French at home."

"No comically bad French accent, either. It’s hard enough to understand you with, the…uh…" I gestured towards his withered, half-decayed lips and tongue.

He shrugged and lit a Gauloises. I briefly considered asking him to 86 the Gallic stereotypes, too, but figured I’d better quit while ahead. "If I must," he said, and blew a pathetic attempt at a smoke ring. Did I mention the crumbling lips? "I am calling you about the boy in the maillot vert."

"His name is Peter Sagan. What about him?

"Someone on your Café du Podium the other day asked if Peter Sagan were the first rider to win the first road stage in his first Tour de France, oui?"

"Yes, Maurice. That was asked and answered—between me, Irish Peloton, and straw dog, we came up with over 20 names." I fumbled through the mess on the table top and snagged the right set of scribbles. "Look—here’s the list."

I swallowed. "Yeah, that’s the point. It was by default, so—"

"Of course it counts. I went on to win three stages, and took a glorious overall victory. No one has ever come close to that accomplishment."

"It was indeed a great achievement," I said. "But if the question is ‘Who has won the first stage in his first Tour?’ then you have to admit others have at least done that."

I held it up to the camera. I find it’s a good thing to indulge zombies, at least long-distance.

What was left of his face purpled with rage. "What is this--1904? Michel Frederick? Crétin! Vouz avez plein de merde! I won the first stage in 1904. Moi! This…Frederick person, he came in fourth that day, almost 45 minutes behind me."

"I won that stage. I won that Tour." His filmy glare dared me to contradict him.

"Whatever." I pointed to the next name on the list. "Okay, then. 1905. Louis Trousselier broke your record by winning FIVE stages and the overall in his first Tour."

Maurice snorted, rather inelegantly. "Weakling. I won half of my Tour—three out of six stages. He won just five out of eleven." 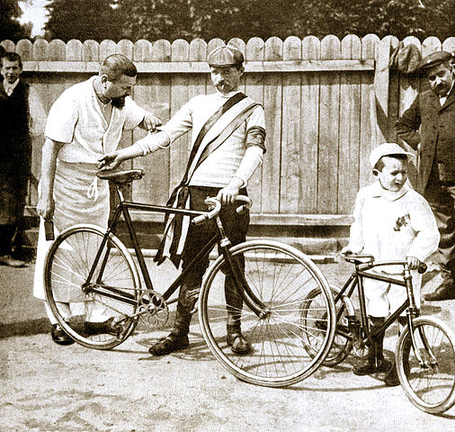 "And in 1903, our stages averaged—averaged!—over 400 kilometers. 1905?" He spat. "An average of 272 kilometers per stage. One of our stages was under 300 kilometers. Do you know what we said? ‘Oh look—another rest day!’ Chapeau to Louis for his five oh-so-easy stages and his overall victory, but do not insult me by suggesting he did better than I did."

I looked back at the list. "Okay, nobody but you and Trousselier won both the first stage and the overall victory in their first Tour, so if you’re not impressed by him, I’m guessing the rest aren’t going to do it for you either."

"Okay, but look at Fritz Schär in 1953. He was the first, and so far only guy to win the first TWO stages of his first Tour. He didn’t win the overall, but he did take the green jersey, and came in 6th on the final GC."

"Oooh, look! Stage 1: 195 kilometers. Stage 2: 227 kilometers. It’s as if they took MY first stage, split it into two, subtracted 45 kilometers so it wouldn’t be so haaa-aaard, then wrapped it up and gave it to little Fritzi on a silver platter."

He waved his cigarette. "Better than the ones that dropped out, anyway. Who’s next?"

"How long was the stage?

Once he stopped laughing, Maurice asked, "Did he finish the race?"

Maurice took a long drag on his Gauloises and blew the smoke towards the ceiling. "I believe their bikes had gears?"

Maurice crushed out his cigarette, causing a disconcerting clatter as the exposed bones of his fingertips drummed against the ashtray. "I am losing interest. No one has challenged me seriously."

"Hmm. 1970, Cyrille Guimard. Won first road stage after a prologue, finished in 70th. You would like Guimard, he thinks riders today are soft. And then…Hey! Even you have to be impressed by Freddy Maertens. 1976. In his first Tour, Maertens took the prologue and stages 1, 3, 7, 18.01, 18.02, 21, and 22.01 for a total of EIGHT stages. That ties the record for most stages won in a single Tour: Charles Pelissier was the first to do this in 1930; Eddy Merckx pulled it off in both 1970 and 1974, but Maertens was the first and only rider to win 8 in his debut. He also won the green jersey and finished 8th in the final classification." 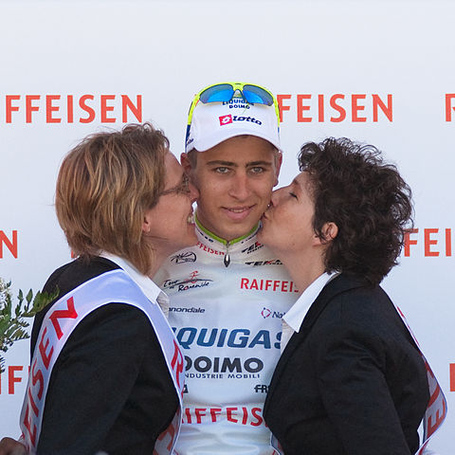 I sighed. "Yeah. Half your Tour’s stages and the overall win. Imagine the records you might have set if you hadn’t been disqualified from your second Tour and suspended for two years."

"Imagine. Are there any others?"

I looked. "Just a few, if we don’t count guys who won the prologue or opening TT in their first Tour, like Thurau, Cancellara, Millar, and Zabriskie."

"Okay, okay. But it’s still pretty cool to top the first podium of your first Tour, even if—"

"Four, then. 1977, Pierre-Raymond Villemiane. His only stage win that year, finished 15th on GC. Then 1987, Nico Verhoeven; and 1995, Fabio Baldato. Neither finished the race. And now 2012, where Peter Sagan has so far won his first road stage, stage 3, and currently holds the green jersey. No, he’s not a threat to the overall, but only 11 of you have won the first stage of your first Tour plus at least one other stage. If he pulls off a third win, he’ll be one of 6 to accomplish first-plus-at-least-two-other-stage-wins (including you)."

"Oui, mais he will have to win 8 stages and the maillot vert to tie Freddy Maertens."

"I thought you weren’t impressed by Maertens."

"I was not totally unimpressed."

"Yup. Coming close to Maertens will be difficult, even for Sagan, but if he goes on to win the maillot vert, he’ll be one of eight who have won green in their debut Tour, and one of four who have both won the green and the first stage in their first Tour."

"If I happen to see Peter Sagan, I’ll pass on the invitation. Wait…are cervelles brains?"

"You cook them? I thought you just scooped them out of the head and ate them raw."

"Madame! I am a zombie, not a barbarian!"

"Oops, sorry, I—" But he had already clicked off.

So, there you have it, from the Zombie Maurice Garin himself. To recap, Sagan is part of an elite company of 22 (or 21, depending on where you side on the 1904 problem—the official Tour site still lists Garin as winner of Stage 1, but there is a row of asterisks after it) riders who won their very first road stage in their very first Tour de France.

Plus, if he holds on to the sprint jersey, he will be one of 8 who won it in their first Tour, and one of 4 who took green after winning their first TdF road stage. Fritz Schär accomplished it with 2 stage wins; Rudi Altig with 3; Freddy Maertens with 8. Sagan could slot in neatly somewhere among them.

Can’t wait to see where...but remember, if he's going to impress Maurice Garin at all, first he has to finish the race.