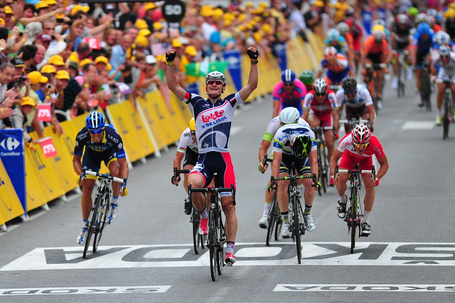 Andre Greipel of Lotto-Belisol timed his jump perfectly again to win his second consecutive sprint stage of the Tour de France in Saint-Quentin. Matt Goss of Orica GreenEdge opened up the sprint, coming past the riders from the breakaway and clear into the lead, but he jumped far too early, and Greipel stayed cool, shifting from his leadout to the wheel of Cofidis' Sammy Dumoulin, just behind Goss. World Champion Mark Cavendish of Sky had no response to any of it, but Greipel did, coming past Goss and Dumoulin at the perfect moment.

The day's stage connected Rouen to Saint-Quentin, back to the valley of the Somme, in northern France. Saint-Quentin is an early point along the route of Paris-Roubaix and part of the "Hell of the North," describing the area of France devastated by World War I. The route was truly flat all day, with no KOM points given, but the final km to the line had a slight uphill. The breakaway of Urtasun, Ghyselinck, Simon and Ladagnous didn't get much space -- one more day and their luck may change. For now, though, they were caught in sight of the line, after Ghyselinck made a brave final km attack.

Team Sky, under criticism for yesterday's crash where Bernhard Eisel and Mark Cavendish went down, asserted itself a bit more at the end of the stage, putting five or so riders on the front to protect Cavendish. Today he made it home safe, in a chaotic finale involving the early break. But Tyler Farrar got into a tight spot and went down with 3km to go. Farrar finished the race eventually. Peter Sagan was held up and missed out on points.

No changes to GC today and no KOM points or young rider changes. Points became more intriguing, as Sagan's misfortune repaid Cavendish's form yesterday, and the race is on again.