Share All sharing options for: Giro Donne Stage 7 - Marianne Vos does it again!

With just two stages to go after this one, this looked like it could be a bit of a danger stage for Rabobank's Marianne Vos, who's leading the GC by 1:44 over Evelyn Stevens (Specialized-lululemon), 2:20 over Emma Pooley (AA Drink-Leontien.nl) and 2:57 on Fabiana Luperini (Faren Honda). It's still hot as hell in Italy, and today's 129km stage was full of lumps and bumps, with the biggest starting with just 15km to go, and another uphill finish. Before the stage, we'd wondered if anyone would make time on Vos today, but she took her fourth win of the race. It didn't come easily, though, and the last 20km especially were the kind fans watch breathlessly, really exciting, exhilarating racing! Find out how it played out below the jump, listen to Vos describe the stage after the race (audio interview in English) - and look at this gorgeous photo of her sprinting around the corner and over the finish-line, to take the win! 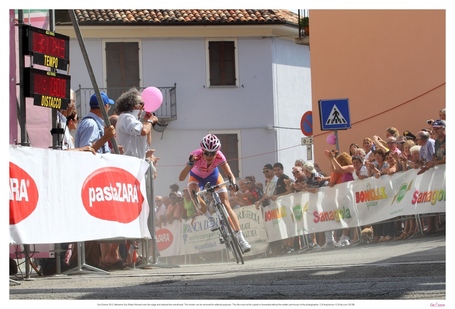 The race started in Voghera, with around 45km of flattish road. It was still 30º, which while not as hellish as the mountain stages, was still hot enough for Vos to turn up to sign-on with a bottle tucked down the back of her shirt. And the racing heated up right from the start, too. There were plenty of attacks - Ludivine Henrion of Lotto launched one pretty much immediately - but the pace was super-high, so it was hard to get away in the first 40km. From the video, it looked more like the last 5km of a sprint stage, with trains forming, attacks up both sides of the road, and the race being less of a bunch and more of a string. Up on the front was yesterday's winner, Shelley Olds (AA Drink) and sprint megastar Ina Yoko Teutenberg (Specialized-lululemon), and the long line of riders stretched, stretched, stree-ee-ee-ee-tched... until suddenly at km 40, there was a breakaway group of 11, and the peloton dropped back into the distance.

It was a group that represented all the big teams, and a lot of the smaller ones, with no threats to the GC, but a lot of sprint experience: Olds, Teutenberg, Italian champion Giada Borgato (Diadora Pasta Zara), Noemi Cantele & Elke Gebhardt (Be Pink), Alessandra Borchi & Marta Tagliaferro (MCipollini-Giambenini), Liesbet de Vocht (Rabobank), Amanda Spratt (Orica-AIS), Romy Kasper (RusVelo), Lise Nøstvold (Hitec) and Anna van der Breggen (Netherlands). The bunch let them ride, and by km 55, they had a gap of 2:35. Faren Honda was one of the few teams not represented at the front, so Nicole Cooke tried to bridge across, but couldn't make it. The escape group picked up speed, and by km 72, they had 3:38 on the peloton... you might think the short, sharp climbs would slow the fast women down, but they were pulling out their lead - 4:28 at the 100km mark... until the hills started to bite, and the GC contenders behind them got antsy and turned up the speed, and they were pulled right back and overtaken on the hill.

By the time they hit the big climb, the race was made up of small groups all over the road, with Emma Pooley, Evelyn Stevens and Marianne Vos always on the front. Pooley's team-mate, Luncinda Brand did sterling work, attacking early on and making Vos chase her, until Brand's job was done and she dropped back; and then there were 11 riders - Vos, Pooley, Stevens and most of the GC top 10 - Luperini, Tatiana Guderzo, Judith Arndt & Claudia Häusler (Orica-AIS), Elisa Longo Borghini & Emma Johansson (Hitec), with Alena Amialiusik (Be Pink) and Rasa Leleivyte (Vaiano) for company.

The three who were in charge, however, were Stevens, Pooley and Vos. The rode most of the first climb three-abreast, the climber's turn to keep the speed high. Pooley takes the perfect mountain-goat inside lines round the corners, and lead the group over the mountains, consolidating her Queen of the Mountains lead... then they crested the hill, ready for the descent.

You might have expected, after Vos' spectacular long descent won her Stage 5, that she would do it all again, but the road wasn't steep or long enough, and this time everyone was ready - Pooley in particular demonstrating how much she's improved her descending in these past few years, and following the Vos-line. There were various downhill attacks, but no one made it away - and more attacks through the narrow lanes and villages... and then Vos turned on the fireworks, and started really going for it, sprinting into any bit of downhill going. But she couldn't escape! Pooley caught up on the flat, and then Emma Johansson, who'd been delayed by a bike change just before the climb, took over the Vos-harassment, and it was the three of them, such different and such brilliant riders, racing together. Pooley lead on the uphills, but Vos was right on her wheel, then Vos attacked the downhills, but both Emmas stayed with her, and kept attacking as well - and it was just 3km to go!

No one could shake each other, and then Stevens bridged to them, and she had a go attacking too! It was one of those race ends, everyone trying everything. At 1km to go, Pooley tried one last time, and hit the front, with Vos taking a breather at the back of the quartet - but she couldn't drop Stevens, who pulled away, Vos on her wheel... and then they were just about caught by the rider's they'd dropped a few km back! Up through the narrow alleyways and sharp corners, and Vos' technical skills gave her the edge, sprinting away round the final tight corner over the finish line - she'd won another stage, her bonification seconds extending her lead!

Claudia Häusler and Amialiusik finished with that group - then Tiffany Cromwell all by herself - then Lucinda Brand, and Katarzyna Sosna, both solo - then a group of 8 at 3:43, lead by Sharon Laws. And then, 4:34 back, Noemi Cantele and Giorgia Bronzini. Bronzini had shown up in the video leading the major chase group for a while, which seemed unexpected - but then she and Cantele looked exactly like they were discussing tactics together, and that last climb did seem a bit like Box Hill....

The GC is broadly similar, just with Tiffany Cromwell dropping a few places back. With two stages to go, how much can it change? Well, Stage 9 is another climby one, but Stage 8 could go any way. It starts with 3 loops, and it all depends on how that profile translates to the roads, before abut 40km of flattish run-in. Well, it looks flattish, but we are in Varese tomorrow, and Varese stages can have surprises! Here's Monty's description from his race preview:

Stage 8 from Crugnola di Mornago to Lonate Pozzolo is all about loops and bumps. It begins with three laps of a 17km circuit that runs down to the shores of Lake Varese, and on the third time round the highest point also becomes a categorised climb. We then head south onto another loop, this one of 36km and with a couple of intermediate sprints en route. Today's final run-in is, however a lot friendlier to the chasing peloton, so it will take a real suicide dash to keep this one from the sprinters.

Well, women's racing is all about those suicide dashes, and there are still riders who'd love some Italian glory!

While we're waiting to see what happens there, spare a thought for Lizzie Armitstead, Barbara Guarischi and Christel Ferrier-Bruneau, who all had to pull out today - and they're not the only ones who had bad luck:

What a day!Crash on a decent,rearmech then snaps off on a climb,no spare bikes at back, finally get someone's else bike n shoes to finish!

We'll have videos as they come, in the comments and embedded here - and Womenscycling.net should have photos up on their race report very soon. Amber Pierce says the hotel is chaos, so she won't be doing a live Q&A tonight, but if you wonder what I sounds like talking about the race, rather than just writing about it, check out Omnevelnihil's and my podcast, where we chat about the race so far. We may swear once or twice, so it might not be SFW!

As always, if you have any Qs, or just want to chat, join us in the comments!