The Postal Five: What Are The Implications of the Armstrong Testimonies?

Share All sharing options for: The Postal Five: What Are The Implications of the Armstrong Testimonies? 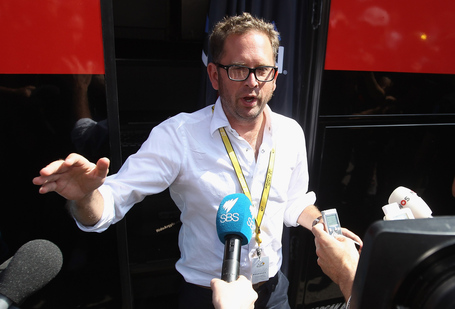 Last night, the Dutch newspaper De Telegraaf broke the next installment in the Lance Armstrong story line. In its article, it asserted that five former US Postal riders - all teammates of Armstrong at some point during his career there - had testified against him to the US Anti Doping Administration, USADA. At least four of the riders - Christian Vande Velde, David Zabriskie, Levi Leipheimer, and George Hincapie - admitted to using performance enhancing drugs alongside Armstrong in their testimonies. In response to their admissions, they are to receive six-month doping suspensions. But, because of their cooperation in the investigation, the purported suspension is not slated to take effect until late September, making it much more of a slap on the wrist than a real punishment. Garmin-Sharp team manager Jonathan Vaughters was also named in the article as the fifth former US Postal rider who testified, though the purported details of his testimony are less clear.

The article seems to reveal the next round of facts accumulating against Armstrong and to illustrate the way in which the case against the 7-time Tour de France champion is likely to play out. The seriousness of the claims made by the riders - especially their admission of illegal activity in the past leading to a suspension in the near future - seem to discredit Armstrong's steadfast denial of the claims raised against him. The World Anti-Doping Agency is allowed to trade reduced sanctions for evidence in doping cases, so the story is quite plausible. However, under greater scrutiny the article serves to raise more questions than it answers.

The hours before today's stage in the Tour de France began were even busier than usual on the media front. Reporters sought out all five individuals asking for statements of affirmation, clarification, or denial. And deny, deny, deny the riders did.George Hincapie said he was "disappointed this is being brought up again" and steered the discussion towards his goal of helping Cadel Evans win the Tour again. Jonathan Vaughters steadfastly declared that none of the riders employed by Slipstream Sports - which owns the Garmin-Sharp team - had received six-month suspensions effective immediately or at a later date.

The devil may lie in the details, though. Suspensions may not have been handed out quite yet, if true. And Vaughters could have knowledge of likely or pending suspensions that have not been officially laid out yet. But these are far from the largest questions marks this story has generated.

Cycling news reporting is certainly prone to rumor - one particularly memorable one from this year involved the decisions of Alberto Contador and the Schleck brothers to switch teams to be with their former managers, Johan Bruyneel and Bjarne Riis respectively. While the article has been re-printed and alluded to in numerous stories on traditional cycling news venues, no further information has surfaced. As such, it is hard to gauge the accuracy and meaning of the De Telegraaf article. Even if the source was good, the motives behind divulging some or all of the information about the case is unknown.

As a few astute observers pointed out on twitter, Johan Bruyneel regularly writes a column for De Telegraaf. Bruyneel is himself implicated in the same suit as Lance Armstrong and could be looking to shift media attention away from himself, especially after his allegedly voluntary decision to refrain from attending the Tour de France in his role as the manager of the Radioshack Nissan team. Whether this is actually the source is highly questionable; USADA regulations do not require them to divulge all evidence to the accused parties at this stage of the investigation. And even if Bruyneel knew the content of testimonies incriminating him and Armstrong, would he know the identities of the individuals involved or the deals which they had made with USADA/WADA?

Or, Bruyneel's association with the paper could be mere coincidence. Certainly stranger things have happened in cycling media in the past. The Bruyneel connection only illustrates the problems involved in the reporting of the supposed testimonies and suspensions.

Whatever the quality of information, the article and its aftermath are predicatbly causing a number of problems for the parties involved. Riders have been drawn into a he-said-she-said match that nobody can seemingly win. Hincapie, Leipheimer, Vande Velde, and Zabriskie have jobs to do at this year's Tour that are certainly harder with this added distraction, not to mention the way in which their reputations have been affected regardless of the actual facts of the case.

Vaughters is faced with a host of difficulties now as well. Even though he is no longer a professional ride and hence unlikely to receive any sanction if he actually did confess to doping, the story is almost certain to stir up discussion of his role as the figurehead of a team so firmly committed to clean racing. The story of Vaughters' years at Postal could have wings, though. In an interview with Paul Kimmage several years ago, he admitted his stage win atop Mt. Ventoux and second overall in the race - his best result as a professional - "answered a lot of questions" and left him less pleased than other results he had achieved.

The real shame comes in how the story could tarnish the very individuals who have been working so hard to rejuvenate cycling with an infusion of flagrantly clean racing. Zabriskie's and Vande Velde's positions as quintessential components of the team that embodies following the rules could be tarnished despite their every effort to spread a good message in their tenure in the various incarnations of the original Slipstream team. While their laudable results - and the evidence collected by both the UCI and Slipstream Sports' internal doctors that suggests they were achieved without any resort to illegal methods - speak of what is achievable while eschewing the use of performance enhancing drugs, their voices could be drowned out by the lack of a public apology in the style of David Millar (if they even did the purported deeds). For Vaughters, this bit of reporting - even if proven false - could endanger his ability to recruit sponsors to support a team that is admittedly shorter on funding than its rivals even though its ethic is praiseworthy.