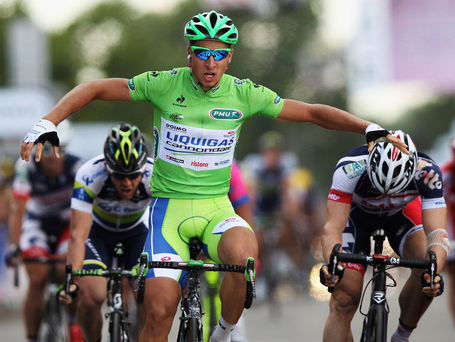 Peter Sagan won the sixth stage of the Tour de France in Metz today, handily out-sprinting André Greipel and Matthew Goss. Once again, Lotto-Belisol looked to have nailed the leadout for Greipel, but unlike yesterday Sagan had more speed and jumped around the German sprinter 150 meters from the line. The sprint was notable not only for Sagan's win (and his Hulk-inspired victory salute), but also for the absence of Mark Cavendish, Tyler Farrar, and Oscar Freire, who were both caught behind a major crash with 20km remaining in the race.

As was the case yesterday, the breakaway du jour stayed away until the final kilometer, the sprinters' teams barely making the catch this time. Today's escapes numbered four - Davide Malacarne (Europcar), Romain Zingle (Cofidis), Karsten Kroon (Saxo Bank), and David Zabriskie (Garmin-Sharp). Zabriskie attacked his companions in the final kilometers and held off the charging pack until the 1300m to go mark.

While Sagan's first true bunch sprint victory in the Tour was noteworthy, a second major storyline played out on the road in the final 20 kilometers. A big crash occurred in the middle of the peleton as riders were traveling at approximately 70kph, bringing down a number of major contenders for the overall classification. Among those involved in the crash were Ryder Hesjedal, Fränk Schleck, Alejandro Valverde, Pierre Rolland, Michele Scarponi, Janez Brajkovic, Robert Gesink, Lieuwe Westra, Christian Vande Velde, Dan Martin, and Thomas Voeckler. The crash caused a major split at a crucial point in the race, so those involved or held up by the crash were unable to rejoin the peleton before the finish. Most overall contenders involved finished the stage 2 minutes down on the leaders, but several - most notably Robert Gesink and Ryder Hesjedal - finished even further down.

The crash and associated time losses has dramatically reshaped the overall classification. Now, the race is likely to be decided between Bradley Wiggins, Cadel Evans, Tejay van Garderen, Vincenzo Nibali, Andreas Klöden, Samuel Sanchez, and Levi Leipheimer, who all finished in the front group today.