Today's stage was designed by Italian star Noemi Cantele, who's apparently the last Italian rider to win a Giro stage, back in 2009.... but continuing the game of "How many different ways can I win a stage?", this picture gives it all away... 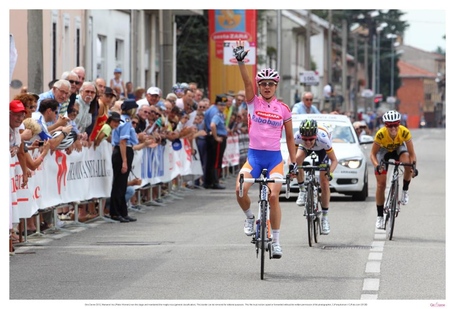 It wasn't as easy as it might look, however. Below the jump, we'll have video, the race report, and all kinds of goodies - and if you're wondering if I'm as excitable talking about the Giro as I am typing, listen to this! But enough of the shameless self-promotion (listen to omnevelnihil's actually-not-very-crazy-idea, and to me rhapsodise about Downhill MTB as well as the Giro podcast!!)

The race started on a very serious note today, as it's a year to the day that Australian cyclist Carly Hibberd was killed while out training in Italy. It's a sombre reminder, not that we need it, that these riders put their lives on the line for the sport we love. My thoughts are with Carly's family, her loved ones, and everyone who knew her. It feels slightly wrong to go into race reports after something so serious - but Hibberd loved cycling, and racing, and I'm sure she'd want us to...

Anyway, the stage started with the by-now-traditional Be Pink dance at sign-in. It's a lovely thing, the Be Pink dance, and I'm hoping Monty will have appropriate screenshots, and that Ted will make us a gif! Today's stage was special as well, because it was co-commentated by Marina Romoli. Romoli was the next big thing of Italian racing, but at just 21, she had a horrific accident, when a car pulled out of a side-road while she was on a training ride, leaving Romoli in a wheel-chair. It's one of the lovely things about the Giro, and her team, Diadora Pasta Zara, that they keep her in their hearts - and it was great to see her on tv today - poignant, in light of Hibberd's anniversary, but a positive statement about how Romoli is still very much part of the sport.

Today threatened to be all about the breakaway, and all sorts of riders tried to get away on the first lap, especially AA Drink-Leontien.nl's Lucinda Brand. But, as has been so often the case this week, it was an Orica-AIS rider who got away - this time (and yet again) Linda Villumsen. This was a gift for the Australian team, who have three riders in the top ten. The peloton had been warned what could happen, after Tiffany Cromwell's win from an early suicide break on Stage 5, and Villumsen is always dangerous... if other teams had to work, that helped Arndt, Häusler and Cromwell - if they didn't, it's another win for the team, and if the worst came to the worst, it was great ITT practice!

Cantele tried to bridge to Villumsen, but couldn't make it, even though Villumsen's lead never seemed to get above 40". But the sprint teams were out in force, and the front of the race was like a "who's who?" of women's cycling, with Rabobank, Diadora, Speciliazed-lululemon and AA Drink holding tight to the control, and the GC stars like Evelyn Stevens (Specialized) and Emma Pooley (AA Drink) driving the pace. By 68km, Villumsen was caught, and no one else could get away (though of course, lots of them, including Brand, again, tried).

The first intermediate sprint was won by Valentina Carreta (MCipollini) ahead of Villumsen (AGAIN!) and Charlotte Becker (Specialized-lululemon) - and then almost immediately afterwords there was an attack! Judith Arndt had gone - and only Vos and Stevens managed to go with her!

Arndt is a true all-rounder, who won her 20th German national title this year - and as the reigning ITT World Champion, when she puts her foot down, she really goes. It was all Vos and Stevens could do, to hold her wheel as she showed why she'll be the one to watch in the Olympics next month... and watching her expertly peel off to let Vos take her turn, you could see her track expertise coming through. Brand and Pooley gave everything they could for Pooley to reach the trio, but it was impossible, and all the sprint teams, still hoping the long, flat run-in would give them their final chance for glory, kept Pooley under control.

The pace was so high, and at 10km to go, the gap to the trio was only 36". You might expect that gap to be eaten up, but each of those three is a former national ITT champion, and despite a lot of looking at each other, and the occasional raising of the pace and attack-let, they stayed together, working well. At 3km, Vos attacked, but the other two were ready for that, and Stevens didn't let go of her wheel.... Behind them, Pooley was making a last effort.... then Arndt tried it, and the escapees hit the final set of corners.... At 300m to go, Arndt was leading, keeping an eye on Vos, who was watching out for Stevens - and then go! It was time for the sprint, and much as Arndt and Stevens are complete stars, Vos is one of the best sprinters in the world. Take a look at the photo at the top once more for how it ended!

Shelley Olds proved showed us (again) that winning a stage was not enough for her, winning the bunch sprint for 4th - and Vos and Stevens consolidated their GC positions, with just one stage to go!

So tomorrow it'll be Vos versus Specialized-luluelmon, and every team who hasn't had a win so far. It should be a spectacular one - let Monty tell you all about it!

Usually the final day of a stage race is a bit processional. The GC has been settled, and for most of the peloton it's a chance to sit back and enjoy the applause, while le big sort out any final scraps between themselves. Not so this year as stage 9 from Sarnico to Bergamo looks to be the most dangerous and unpredictable of all. It starts out innocently enough with a gentle meander northwards to and along the shores of Lake Endine. Then after about 40km they turn towards Ranzanico and the 2nd category climb of Bianzano, and it's game on. From that point there are half a dozen short, sharp climbs, equally sharp descents and not an awful lot of flat until you hit the final 10km to Bergamo. A couple of years back the US National team used a similar sort of profile to launch Evelyn Stevens on a solo run past the Madonna del Ghisallo to the stage victory. Will anyone have a similar plan in mind today. If you want to trace the route out yourself, grab the routebook, start here, and have fun.

Don't you love it when the final stage can decide a race? One thing is certain - Vos will give everything to keep her beloved maglia rosa!

She'll be without her major support tomorrow, however. Annemiek van Vleuten crashed hard in Stage 4, and despite riding hard every stage since then, and putting in some major work on the front today, has been finally pulled out of the race with a broken collarbone (and uploading the x-ray for us all to see!) She went into surgery this afternoon, and Rabobank say she should be back in time for the Olympics - so cross fingers for her!

I'll edit in the video later, but check the comments for anything I've missed, especially Monty's screenshots. Just one more day to go, and I'm nostalgic already! But there's still 1 more stage to go of this beautiful race, I'll enjoy every minute tomorrow!