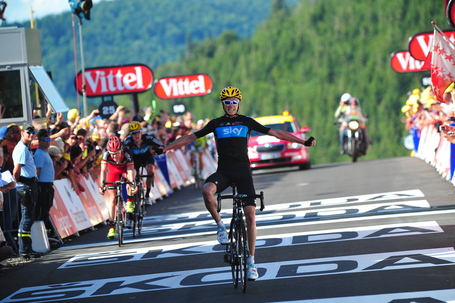 Chris Froome of Sky did double-duty today on a grand scale, first delivering his captain Bradley Wiggins into the yellow jersey and then accelerating in the last 200 meters for the stage victory. Sky, led by Froome, drilled all of their rivals on the terribly steep climb to La Planche des Belles Filles, with numerous favorites losing more than two minutes and only Cadel Evans of BMC, Vincenzo Nibali of Liquigas, and Rein Taaramae of Cofidis able to keep the pace. Evans was strong enough to make a kick for the stage win, ahead of Wiggins, who stayed put while his deserving domestique went stage hunting. Froome easily came past Evans on the final ramp, a horrible 20% incline, for the win.

The Tour headed for the hills today, if not quite the mountains. Ryder Hesjedal, Amets Txurruka and Oscar Freire were among the non-starters today, following yesterday's crashes. A seven-rider breakaway enlivened the stage, as Luis Leon Sanchez, Michael Albasini, Dimitri Fofonov, Christophe Riblon, Cyrille Gautier, Martin Velits and Niki Sorensen paced the race until about 25km to go when the peloton revved into high gear, led by Garmin-Sharp.

Ultimately, though, Sky took over the front as the race approached the final climb, with Richie Porte and Michael Rogers unleashing a dog-choking motherload of hurt on the peloton before giving way to Froome, the pure climber, and Wiggins, the overall leader. Overall favorites began dropping quickly, first Robert Gesink of Rabobank, then Levi Leipheimer of Omega Pharma Quick Step, and so on until an elite octet entered the final kilometer. Denis Menchov was the last of the favorites to drop, shattering massively in the final stretch to lose 50 seconds. Nibali held his ground, grimly, while Taaramae let go with the line in sight.

The best young rider jersey changed hands in a big way, as BMC's Tejay Van Garderen couldn't hold the pace and Taaramae claimed the prize, with a 2.37 lead. For his troubles, Froome assumed the King of the Mountains lead, taking the spotted jersey from Michael Mørkøv of Saxo-Tinkoff thanks to a final climb worth more than all the prior rated climbs added together.

It is worth mentioning that Fabian Cancellara did not surrender the yellow jersey without an impressive fight. The Swiss Bear, known as a man for the classics, could be seen passing blown climbers as he made his way up the final climb, limiting his losses to Bradley Wiggins. Cancellara showed that he not only can set records (having earned the most days in yellow for a non-GC winner), he can fully appreciate what the jersey means and honor it with aplomb. Cancellara is now 1.43 back, probably with no chance of retaking it after Monday's time trial, but you never know.

The Tour de France has a long way to go before Paris, with stages that will test the leading men more than today's short but brutal ascent did. Still, for now, it's clear who the strongest team is and where the strongest challenge to Sky's dominance will come from.