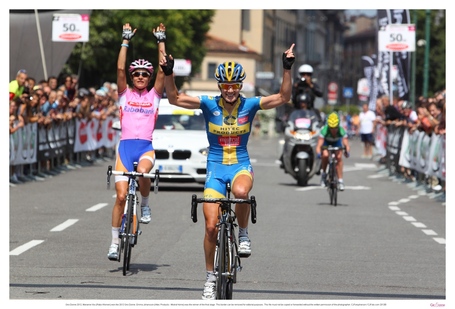 Over in Italy, it was the final stage of the biggest women's stage race of the year. Marianne Vos, who had already won five stages, was leading the General Classification by 2 minutes on Evelyn Stevens and 3:23 on Emma Pooley - but it was a tough day full of climbing in the heat, and with plenty of opportunities for last-stage glory, it was never going to be a done deal that she'd end in pink.

Below the jump, all the usual race reporting - but I'll start with an audio interviews with stage winner Emma Johansson, and race winner Marianne Vos, and a little video of highlights of today's stage - with great pre-stage dancing from Specialized-lululemon, and a big pink cake....

Photo by CJ Farquharson, provided by the Giro Donne

So, a GC recap, as the stage began:

Here's the 50 min video of the stage:

The stage profile started innocently enough, before bringing on the hills, with two GPM points, at 47km, and 94km, 12km before the finish-line. The race started with the usual attacks, from the usual suspects, including Silvia Valsecchi (Be Pink), Valentina Scandolara & Marta Bastianelli (MCipollini) and Shelley Olds & Lucinda Brand (AA Drink) and riders we've not seen so much of, like Iris Slappendel (Rabobank) and Sharon Laws (AA Drink), who was racing in her brand-new British Champion's jersey and birthday-girl rosette. There were so many groups and attacks, that it was impossible to keep up - I especially liked the tv showing Scandolara attacking over and over, with the kind of eloquent hand gestures to others riders to work with her that the Italians excel in. Laws and Brand were especially active, and when it went uphill, were all over the front.

It was a fast-paced race, the first hour raced at 42kph. The biggest break formed when Valsecchi and her team-mate Simona Frapporti formed a group of four with Inga Cilvinaite (Diadora) and Marta Tagliaferro (MCipollini) - and then Marta Bastianelli joined them, and more and more riders joined them - including Liesbet de Vocht (Rabobank), Giada Borgato (Diadora), Monia Baccaille (MCipollini)... then there were 18 riders in the group, then 25, then 37, with lots of attacks and combinations of riders, Laws and Brand trying it with Polish MCip rider Malgorzata Jasinska and Nicole Cooke (Faren Honda).... but then the GPM started in earnest, and Vos attacked from the chasing group - and suddenly it was all about the GC again.

Johansson kept attacking on the climb, then at the same time, Pooley and Stevens tried from different sides of the road - and then Brand attacked hard, and just as she was caught, Pooley jumped - but Vos was always ready, and not only held their wheels, but crossed the GPM first, with Johansson and Pooley behind her. The three broke away on the descent, but Stevens, all painface, chased hard, with Luperini behind her, and caught them. The front group were all together, but then it was déjà vu all over again, as Pooley, Johansson and Vos took off - and this time, exhausted by nine days of the toughest racing, no one could catch them. They gained 2:50, and although Claudia Häusler, Rossella Ratto and Judith Arndt all tried, no one could catch them.

It was now races within races - Pooley looking for opportunities to get away from Vos, Johansson after the stage win and to get into the GC top 10 - Stevens trying to hold onto her second place in GC, Luperini and Arndt trying to climb the rankings - and the other riders - like Anna van der Breggen, who HAS to be signed by a big team next year - wanting some stage glory. But Emma Johnsson has been getting better and better on every stage she's ridden, Pooley is getting onto ITT form for the Olympics, and Vos is Vos! The front trio were unstoppable! Pooley tried some attacks, but Johansson kept catching her. Pooley crossed the final GPM first, to secure her Queen of the Mountains jersey - and then they were in Bergamo for the finish, Pooley trying again at the final kilometre mark, and as they went into the final corner, but Johansson went past her, starting her sprint first, crossing the line with the biggest smile, Vos behind her, arms in the air as the race winner!

The sprint from the group of 12 behind them was fast and furious, Alena Amialiusik capping her excellent race with the win. Evie Stevens crossed the line next, in 16th place, 4:25 down, but still riding as hard as she could to limit her losses. Pooley's break meant a move into second, but Stevens managed to work hard to keep a podium spot, finishing third overall, crossing the line with Stage 5 winner Tiffany Cromwell, whose puncture in the final stages meant she ended up 11th. Liesbet de Vocht won the sprint from the next group, and the last rider, Charlotte Lenting, finished 24 minutes after Johansson, taking the lanterne rouge both for the stage and the race as a whole.

With the same 1-2 as last year, Vos took her second maglia rosa in a row. It might have looked easy for her, but coming back from a collarbone break, it really wasn't. She interviewed pretty much every day how hard it was, but she got better and better throughout the race, and her team were fabulous. It was a hard-fought win, and well-deserved! here's a video form Rabobank of her talking after the stage win - including the Rabo team dancing, and Vos eating her Big Pink Cake:

Vos won the maglia rosa and the sprint jersey, Pooley the Queen of the Mountains, Elisa Longo Borghini the Best Young Rider, and Tatiana Guderzo the Best Italian. Here's the final jersey podium, by CJ Farquharson, courtesy of the race organisers. 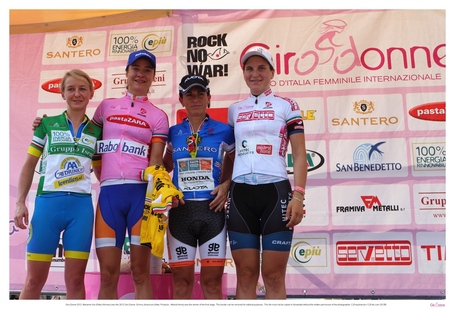 Speaking of wins, of course, we all want to know how the Virtual Directeur Sportifs did - and big congratulations to Josenka, whose team Daphny van den Brains and the Zombies Vos-ed the competition!

You can see how your team did on the fsa VDS page - and thanks as always to Ted for providing the website, and Jens and majope for populating it for us. Thanks also to all of you who've been following the race with us - it's been a blast!

Some final fun, for the last stage

Happy, proud and a little drunk! Marianne wins the #girodonne! Thanks for the champagneshower @marianne_vos

So happy to finish my first Giro Donne. I'm shattered! The winners give me so much inspiration to keep getting better. Pizza time now!

At least I finished the Giro in good health, no injuries, developed friendships, km's in the bank, increased fitness & a great team result!

And finally, I just want to plug Amber Pierce's live Q&As for one final time. She's been absolutely superb, finishing the stages, having massage, supper, team meeting etc and then getting onto the computer to talk to us! She's answered every question, given great insight into the race and into women's cycling in general, and told some very funny stories. Tomorrow's her last one of the race, so PLEASE tune in and check her out! it's hosted on the Fuji Bikes facebook, but you don't need a facebook account to log in and ask her things - it's 21:00 CEST tomorrow - 8pm BST, 3pm USA Eastern and 12 noon USA Pacific. I guarantee you won't regret it!

In the meantime, check out the comments for the usual videos, blogs and stuff - and if you have any questions or comments about the race, add them below! Thansks to the riders for a fabulous race, and to all of you for following it with me!