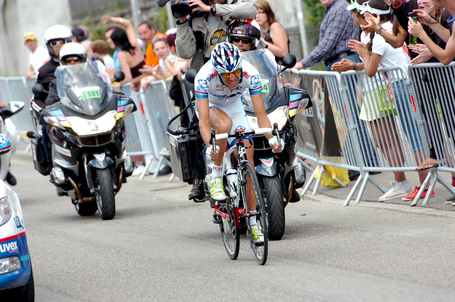 Thibaut Pinot of Francaise des Jeux gave France its first stage victory in the 2012 Tour de France, albeit on Swiss soil, emerging from a series of breakaways with a strong final climb that just held off the chasing group of favorites. The 22-year-old climber from the region of France where the stage began held off a charging group of Tour de France favorites, willed on by his directeur sportif, two-time Paris-Roubaix winner Marc Madiot, screaming encouragement from the team car. Inside of 5km it appeared that the chasing group might catch Pinot, with a flat road and headwind left to go, but Pinot dug deep enough to cap the biggest win of his budding career, with 26 seconds to spare.

Frederik Kessiakoff of Astana departed the day's breakaway and rode a massive solo effort into the Jura region of Switzerland, in search of the stage, while Radio Shack's Tony Gallopin and Pinot went in search of the yellow jersey, needing over three minutes for Gallopin to take the honors and four for Pinot. This was only briefly in play, as behind them Liquigas were pacing the peloton, seeking to assert itself on a day when the Tour would end in a descent, favoring their captain Vincenzo Nibali. Pinot dumped Gallopin over the final uphill, the Col de la Croix, a very steep 4km ascent, and caught Kessiakoff with 16km to go, and immediately attacked for the sole lead.

Back in the peloton, Jurgen Van Den Broeck and Lotto Belisol took over from Liquigas as the GC leaders heated up. Cadel Evans, Bradley Wiggins, Nibali, Denis Menchov and others put the hammer down, leaving the rest of the peloton in arrears. Gallopin was absorbed on the descent, where Nibali briefly tried an attack, to no avail. Evans tried to attack for a few seconds in the final two km, but the main guys ended together.

There was no change among the big GC favorites, but the KOM jersey went to Kessiakoff by a single point, and Gallopin chopped a couple minutes off his deficit in the best young rider competition, as holder Rein Taaramae lost time today. In the process Taaramae surrendered his fourth overall position, while Pinot and Gallopin moved up. No action in the Green Jersey today.