The Wiggins Fiasco: What to Make of It?

Share All sharing options for: The Wiggins Fiasco: What to Make of It? 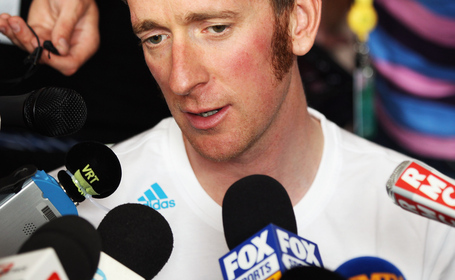 Post-stage press center interviews are usually tame. Aberrations happen, though, and today an unfortunate AP reporter bore the brunt of Bradley Wiggins' anger after posing a series of questions about his and Team Sky's ability to control the race on Saturday's stage to La Planche des Belles Filles. The reporter began with an innocent sounding but loaded statement, "There was some chatter in the Twitter-sphere about the comparison between Sky and US Postal." The, the biting question - "I'm wondering your reaction. And, what do you say to the cynics who say you have to be doped up to win the Tour de France?"

Honestly, they're just f**king w**kers. I cannot be dealing with people like that. It justifies their own bone-idleness because they can't ever imagine applying themselves to anything in their lives. And it's easy for them to sit under a pseudo-name on Twitter and write that sort of s**t rather than get off their arses in their own life and apply themselves, and work hard at something and achieve something. And that's ultimately it... C**ts.

Wiggins is known for his profanity, more often than not remembered as an endearing aspect that completes an eccentric persona. But this particular outburst, it was harsher than usual, lacking the usual humor which fills the British rider's occasionally profane remarks. In short, it stirred up quite a commotion.

Riders and press corps members have already started voicing their reactions to Wiggins' outburst. Some, like Christian Vande Velde (a teammate in Wiggins' Garmin days), expressed their full support of the Brit. Far more expressed qualified support - agreeing with the sentiment of the remarks, but also noting the restraint that public figures are expected to show.

Was Wiggins correct in his remarks? Partially. For a rider who is presumably racing clean, constant insinuations that his team and even himself are racing well only due to the added advantage of illegal practices are insulting to the core. And perhaps it is time we stop being so skeptical of Wiggins' abilities - as many running coaches will attest, you can make a miler a marathoner (but not the reverse), which is exactly the transformation we have seen in Wiggins. And the steady stream of results that he has accrued in the past three years indicates he is capable of big performances in stage races, even those that are three weeks long. After all, you don't merely place a close third in the Vuelta - one whose course does not exactly suit your capabilities - while coming back from injury on a whim. And Wiggins' teammates? They would be overall GC prospects on their own were they not working for their leader. It was not too long ago that we talked of Michael Rogers as a Tour de France podium hopeful, not to mention Richie Porte and Chris Froome. Anger? It's only natural in Wiggins' situation.

At the same time, skepticism is natural, especially with the tarnished past of so many former Tour winners and dominant teams. After all, the crushing strength of Lance Armstrong's US Postal team of old is increasingly questioned by the day, especially following recent allegations that five former members of the team admitted to using performance enhancing drugs and practices alongside the 7-time Tour winner. The similarities in the way that Sky slowly suffocated the ever diminishing group of overall contenders on Saturday is almost a perfect copy of the days of Armstrong's "Blue Train."

One must remember that the skeptics are fans too, or else their negative expectations or even cynicism would have driven them out of the sport long ago. Many are searching for a glimmer of hope after decades of bike racing that have been irreparably tarnished, not seeking to destroy. Bradley, perhaps you can make your point by doing, not by deriding them. Or, at least use nicer language?

One has to wonder, too - is the stress of leading the Tour beginning to weigh on Wiggins already? On the bike, he seems able to keep everything in check. But, while normally composed in front of the press, he is prone to outbursts. Many come back to haunt him. Was this just one too many skeptical remarks, just like phrases and questions that provoked outbursts in the past? Or was this time more motivated by the stress of leading the biggest race in the world, of realizing the dream that he has pursued single mindedly for three years?

Yesterday, Wiggins angrily pushed away a cameraman who came too close to hitting him after the stage finished, going so far as intentionally shoving the camera off his shoulder. Such shenanigans are not unheard of - Cadel Evans memorably quipped "Step on my dog and I'll cut your head off" to an oppressive press corps after a mountaintop finish in the 2008 Tour. Stress coupled with oxygen debt leads to harsh reactions that riders would no doubt subdue if they were in more favourable conditions.

The notable moments in the past two days could merely be in-the-moment reactions to triggers, or they could signify more. Can Wiggins deal with the pressure of leading the Tour for two full weeks until Paris? This is the other question experts and laymen alike have been asking, especially since the last time a Tour winner held yellow for so long was Hinault's win in 1985. Sky seemed reluctant to give up yellow to an opportunistic rider today as Postal often did in the years of Lance Armstrong. Not only can this save a team's legs - it can also save them the stress of defending a lead and the accumulated hours of media time that the wearer of the malliot jaune must endure. And that is the next question that people will be asking - can Wiggins deal with all of that pressure for two more weeks?