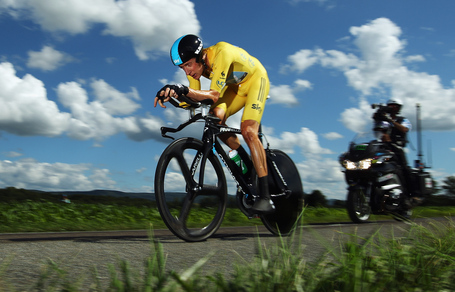 Bradley Wiggins and his Team Sky outfit seized total control of the Tour de France today in the 41km time trial to Besancon, France. Wiggins won the stage handily, thundering across the roads of southeastern France at speeds of nearly 50 kilometers an hour, shattering the leaderboard and stomping the hopes of his closest challengers along the way. Compounding matters for his rivals, Wiggins' teammate Chris Froome -- winner of the toughest uphill stage to date -- posted the second-fastest time, beating that of quadruple world champion Fabian Cancellara in stunning fashion. None of their rivals -- Evans, Nibali, Menchov and so on -- produced anything like a loss-saving time, and the Tour is slipping quickly out of all their hands.

Cancellara of Radio Shack-Nissan-Trek surprised nobody with the fastest time among the non-GC candidates, but BMC's Tejay Van Garderen, a potential Tour hopeful in the future, submitting a strong ride just nine seconds off the pace. Cancellara's number looked nearly unbeatable, but Froome set off and blasted Cancellara at every time check, coming in 22" faster in the end.

Finally it was Wiggins' turn, and while Froome's ride may have left people wondering who Sky's leader should be, the maillot jaune answered that quickly. Wiggins put big time into his closest pursuer and fair cronoman Cadel Evans, beating him by 1.43, and beating Froome by 35 seconds too. 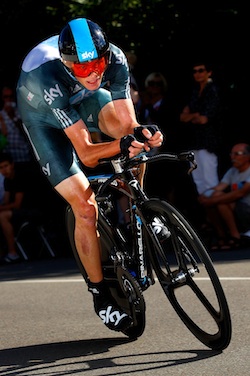 If there is a challenge left for Wiggins, apart from holding his form every day, it may come from Vincenzo Nibali of Liquigas, an excellent climber who rode well though still losing over two minutes. Nibali now sits 2.23 back, a deficit compounded by the fact that he's behind the strong climber Froome as well. But the big mountains are where the Tour is usually won, and those start on Wednesday.