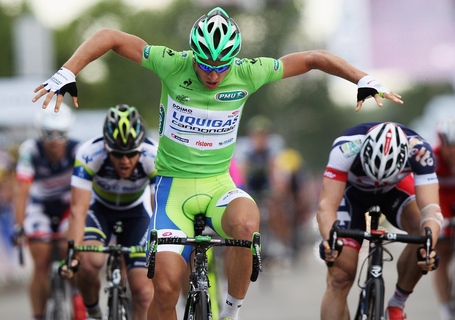 On Thursday last week, Peter Sagan of Liquigas got ghost-biked out of contention for the stage by a flying Cervelo belonging to a grounded Tyler Farrar. After the stage, the President of Fastvakia, whose antics had enlivened the first several days of the Tour, turned dour and complained to the press that he had missed a valuable chance at some points, to pad his overall lead in the maillot vert.

Nobody was weeping for the poor lad a day later, when he came past a limited Andre Greipel, crossed the line, and puffed up his torso in a victory celebration he later named "the Hulk". Gone from contention was Mark Cavendish, at that point. Nipping at his heels were Greipel and Matt Goss, but he'd just bested both in a bunch finish, the one area of points-manship where he was thought to be... not vulnerable, but maybe not owning things outright. It marked Sagan's third stage win of the week, first in a true flat finish, and capped off a week when people tripped over themselves to come up with a more superb superlative for the kid. All in a week's work...

So let's get down to brass tacks. Is this thing over? A la flippe...

Can anyone catch him? Definitely yes, but it won't be especially easy. Let's start sorting this out with a look at what points are available to the vertically challenged, or more to the point, which ones aren't.

The race looks over. It feels over. But the cold, hard reality of the points competition is that the guy you're crushing by 122 points? He's two stage wins and two intermediate sprints behind you. Two days where he is out front and you aren't. With eleven stages to go, that guy isn't finished.

But before we get to that guy, let's look at a couple who are finished.

The proud warrior chugs around France, hoping for one more stage victory. But the closest he has come was stage 4, when Cavendish went missing. Without stage wins, Petacchi hasn't got much chance. Not on this route.

Presumably he knows this as well as any. The World Champion came into the Tour suggesting that he might have to train his focus on the Olympics. This was not in any way suggestive of any doubt. If Cav ever uses that word, you can be sure it's not directed at himself. [Well, not anymore. Emotional dude, etc., but he's the finished product now.] I suspect he looked at the stage profiles and saw a course that hid an awful lot of points behind the hills. For all the gifts ASO directed toward his skinny, pale team captain when designing this course, they didn't do the Manx Missile any favors whatsoever in the process. I would rank him last in this poll, based on a hunch that he doesn't stick around til Paris, but it's unfounded and probably wrong. More likely he wins on the Champs-Elysees.

Of the Gorilla's 172 points, 150 of them come from four stage finishes -- two wins and two seconds -- on flat courses. Not flat? He's gone. I like the guy, but where is he getting his next batch of points? Noplace where Sagan won't be feasting too.

OK, on to the contenders.

I am looking for a sign that Goss can climb with Sagan on occasion. Certainly his Milano-Sanremo win suggests that. Goss has also shown a maillot vert's nose for intermediate points, but I am not seeing any evidence that he was competitive on the two early Sagan victory stages, where late hills dashed the hopes of the sprinters. I see a green jersey in his future, he's steady and strong, more of a pure sprinter than Sagan. I also see some other classics, maybe Gent-Wevelgem. But I don't see him winning on this course. For that he needs Sagan to lose somehow.

Taking a flier here, and yes, I realize I'm once again pumping a guy from my FSA-DS fantasy team. Full disclosure. But what's more likely, an insurgent campaign comprised of an entirely different set of results, or someone suddenly beating Sagan at his own game?

Boasson Hagen, you may recall, won two stages last year, including a major alpine stage to Pinerolo, Italy that went over the Sestrieres climb. He barely lost out to Thor Hushovd, the escape master, in a sprint at Gap, at the end of another moderate uphill stage. In other words, he is the perfect guy for this green jersey campaign. This entire upcoming week is Boasson Hagen's terrain. If he were on almost any other team, and were allowed to max out on points, he could well be in green right now, or certainly sometime soon. He sprints about as well as Sagan -- can't be ruled out in a bunch finish but more likely between third and sixth. But he gets up and over an awful lot of climbs. He won at Pinerolo thanks to a fiendish descent. He can do anything left on the points agenda, apart from contesting actual mountaintop finishes or the long time trials. Though even there, he's pretty good. On a flatter course, Boasson Hagen's maillot vert campaign would be dead and buried. On this course... his chances may yet rise from the grave.

Understand, I place Boasson Hagen and his 122 point deficit second in likelihood of success. The team impediments are still pretty huge. If Cavendish does ride into Paris, Boasson Hagen may again have to pass on the stage win. And in the hills, he might find himself running bottles to Bradley Wiggins. But if Cav goes home and Sky have enough help for Wiggo to let Boasson Hagen do his thing, then this could get interesting again. He may still finish 4th or 5th on points, but if everyone holds form and stays upright, Boasson Hagen has a chance. Which is more than you can say for everyone else.

All that said, only an idiot would doubt the Tourminator at this point.