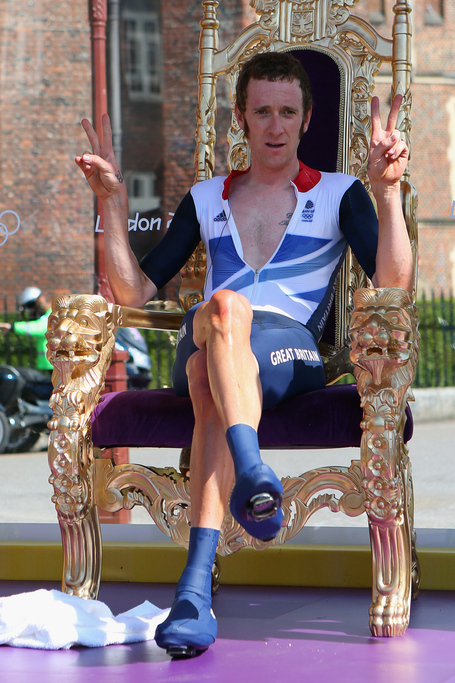 On a rainy and then sunny day and a course designed with the specialists in mind, Bradley Wiggins and Kristin Armstrong took home gold medals that coronated them as two of the best contemporary TT riders in the world. Thousands upon thousands of spectators lined the courses for first the Women's race, then the Men's, as the riders sped by several of the notable historic locations in London. For Armstrong, winning gold fulfilled the dreams that prompted her to come out of retirement in 2011 following the birth of her son.

In the Women's race, bronze medalist in the road race Olga Zabelinskaya (Russia) set an early fastest time of 37:57 for the 29km course and remained in the throne-themed hot seat until late in the race. Successive riders appeared to threaten Zabelinskaya's time by beating her at the first time check, but neither Clara Hughes nor Emma Pooley nor Linda Villumsen could keep pace on the second half of the course. Meanwhile, road race champion Marianne Vos was having a relatively poor ride, being caught and passed by both Judith Arndt (Germany) and Kristin Armstrong (USA) on her way to finishing 16th.

In fact, Zabelinskaya's time stood until the last two riders hit the finish. Judith Arndt was first, hitting the line in 37:50, a mere seven seconds faster than the Russian. However, Arndt's time as leader seemed doomed from the start; Armstrong had set the fastest time checks at both intermediate points on the course and seemed to be accelerating as she approached the finish. A scant minute after Arndt crossed the finish Armstrong posted a time of 37:34, convincingly winning her second consecutive Olympic TT gold. 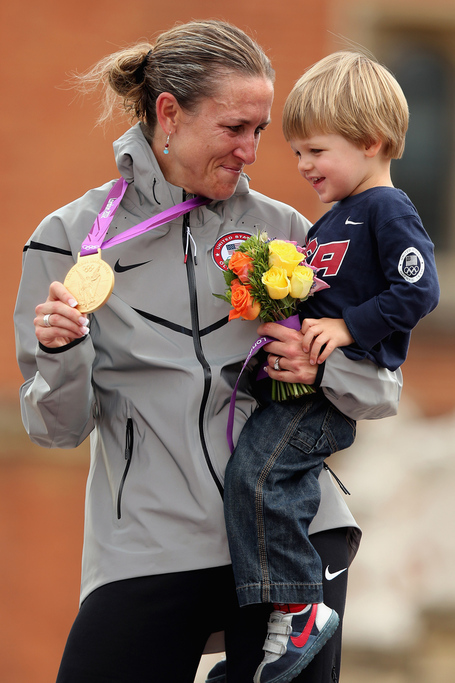 Kristin Armstrong celebrates with her son.

After the women had cleared the parcours, the men took to the course, this time under clearer skies and with drier roads. Jonathan Castroviejo, the ever-improving Spanish time trial specialist, set an early best time, though his time in the leader's throne was short lived as the real favorites began to finish. Michael Rogers of Australia set a time of 52:51 on the 44km course and tersely sat in the hot seat as four riders immediately bested his times at the intermediate time checks.

Christopher Froome, runner-up at the Tour de France, was the first of the major favorites to finish and set a new best time of 51:47. Froome was one of five riders given practically any odds of winning and his time looked solid, though not invulnerable. Froome's odds to win were about 4 in 100 while Bradley Wiggins' were about 68 in 100, and betting markets rarely lie. Froome's time withstood an assault by Taylor Phinney but fell to Tony Martin. Wiggins came through next, clipping 42 seconds off of Martin's time and posting a blistering average speed of 52kph. Only one man could threaten Wiggins, but reigning Olympic TT champion Fabian Cancellara appeared weakened from his crash in the road race on Saturday, visibly shifting his weight around to deal with the palpable discomfort his right shoulder was giving him. Though it was clear that Cancellara would not dethrone Wiggins, the British rider respectfully declined to celebrate until after the Swiss champion crossed the finish and Wiggins' victory was official.

Wiggins' time trial victory puts him in the record books as the first rider to win the Tour de France and an Olympic gold medal in the same year and caps off a stellar season which has seen him win Paris-Nice, the Tour of Romandie, the Criterium du Dauphine, and the Tour de France. Froome, while only going home with bronze, was clearly elated, surely in part because his prowness as a stage racer and role as a future Tour de France contender was confirmed with his performance. Taylor Phinney, only 22 years of age, was emotional after the finish after expressing deep hopes of medaling, though his dual 4th places in the road race and time trial indicate an Olympic medal on the road is surely not far away.