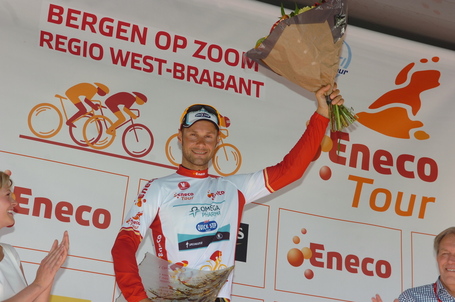 Why? Because here at the Cafe we like to climb the highest peaks, where no man(-ish) has gone before. And I guarantee you I am the only person in Christendom doing an ENECO GC power poll.

Can Tommeke Boonen, your current leader, hang on? He was a little sheepish about taking the overall lead in today's stage -- and who wouldn't be when you go from this cool kit to the one above? 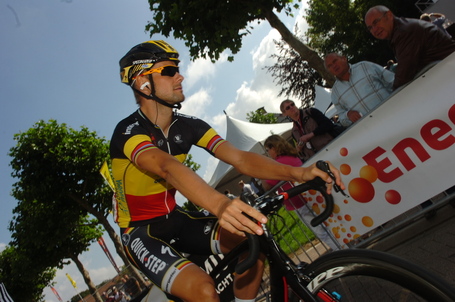 But the rules say he's in first, and in white. Boonen told the local press he's looking for a top ten in Saturday's time trial, and he "look(s) forward to the final stage," an understatement for anyone wearing the Belgian tricolor and discussing a stage finish in Geraardsbergen. That Tom, so understated.

Whether that combination of goals is enough is another matter, as far as the GC contest is concerned. Granted, ENECO isn't really a hot GC commodity, or wouldn't be if the UCI points system represented what everyone there is thinking: that stage wins rule and the other classifications drool. This is racing, mostly in Belgium. Yesterday and tomorrow don't really exist.

Nevertheless, there is a GC, and op de flip, let's look at who's primed for it. [Warning: may contain centaurs.]

Let's break this out into two categories, known as "Saturday" and "Sunday". Or, if you must, the crono and the Muur Epic. Also, this is hardly a comprehensive listing, given that there are 94 riders within 1.16 of the lead. So feel free to add or replace names on my list.

Crono Outlook: Nothing to shout about. But when motivated, Boonen can ride an acceptable prologue, and this year's ENECO crono is 17.4km, sort of a double-prologue. He won't win, and he might get bumped from first, but the gap shouldn't be too terrible.

Cobbled Outlook: Really? Even the Cafe readers who come by solely for the geography geology or particle physics discussions know the answer. Even the people who stumble on this site after googling "centaur" know the answer, despite the fact that we banned the centaur fetishists five years ago. I suppose there is some question about what Boonen can do on this course in mid-summer, without a ton of fresh race miles in his legs. But even there, he's mostly competing against guys who are in the same boat or have too many race miles in them. Look for instinct to kick in.

Crono Outlook: Very solid. Boom is a regular at the ENECO Tour, and was 12th and 5th in his past two ITTs here. Add to that his general competence in the discipline plus his 22nd at the Olympics and you have a guy who... well, he's been practicing on his aero bike. That Olympic result wasn't very good, but then this is about a third the distance, and Boom is like Boonen, pure power, which plays nicely into prologues more than longer ITTs. In general he's good to about 20km, then toast after that.

Cobbled Outlook: I'm measuring my comments on Boom's cobbleability these days, after three years or so of overplaying that hand. But the truth is, finishing sixth at Paris-Roubaix is never a fluke, and Boom was 11th in the Olympic road race, showing he's generally going well at the longer distance. Really, if he weren't with Rabobank, I'd be predicting him for the win.

Crono Outlook: On par with Boom. To be honest, I really wouldn't know who to pick.

Cobbled Outlook: Also on a par with Boom. Fifth in Paris-Roubaix, sixth in Flanders. So what does it mean that he's Boonen's teammate? That Terpstra won't be free to ride for the win, or that he'll be on the attack, daring Boom to chase him? Given all the high cards they have to play, a Quick Stepper will likely win, so if I had to pick one guy on that squad... probably Tom.

Crono Outlook: Gah! A little worse than the Dutch guys. A little better than his illustrious teammate. Hey, this is the kind of analysis you get when a dozen guys are within ten seconds of each other.

Cobbled Outlook: Cut from the Terpstra cloth, or maybe Terpstra got his mojo from riding with Chavanel. That's more likely, I suppose. Anyway, this is just one more way in which the outcome will be decided in the OPQS team car. Ideally Boonen chunks the time trial so Terpstra or Chava can slide into the overall lead. Then that guy sits back while Boonen torments the field on the Muur. Stage win to Tom, overall to Chava or Terpstra, and we all genuflect at the mention of Patrick Lefevre again.

Crono Outlook: Young kid, but he eats prologues for lunch. He beat Bradley Wiggins in the Dauphine opener. Making him the last guy to beat Wiggins against the watch this season. Whether that translates into success at the 17km distance or not, I dunno, but he was very strong at 53km in the Dauphine, and 8th at the 28km California crono, so all signals say go.

Cobbled Outlook: More of a mystery. He's ridden Driedaagse de Panne, so he has at least three days' experience. The time trial will sort out OGE's options, just as with Quick Step, before the Muur. But I wouldn't put this out of Durbridge's reach. It's not April.

Crono Outlook: The data points are few, but he's solid. He finished 18th in the Besancon ITT just a few weeks ago, an impressive result at that distance. Prologues are more of a mystery, but 17km may be enough for Tony to heat up the engine.

Cobbled Outlook: Gallopin's Holy Week debut went OK this spring with a 24th in Flanders. He took a DNF in Paris-Roubaix, but he has seen the cobbles at this point, and his climbing ability will come in handy late Sunday.

Crono Outlook: He's won his last three starts in the aero gear, but that's a TTT and two Canadian events. Still, he might be the old-school crono ace this race will need to shake things up.

Cobbled Outlook: DNFs in both Flanders and Roubaix this year. My guess is, it's not his thing. Tuft has yet to officially finish one of the monuments. He's been good in Driedaagse and 13th once in E3 Prijs. Sleeper pick.

Crono Outlook: Generally quite good. He got smoked by Chava in the Tour's first ITT but that's life at the Tour. Last week he returned the favor at the Olympics. Given his DNF at the Tour, he might be a bit fresher than some of the others on this list.

Cobbled Outlook: Not much to speak of. He's been around for several years, so he's gone over every one of these courses a few times.

Crono Outlook: Is this pointless now? Maybe, 17km is short for Phinney's purposes. But that fourth in the Olympics was very, very impressive. If anyone were to come back from a minute down, Phinney's the one.

Cobbled Outlook: Questionable. He can handle the surface, but his climbing isn't strong enough yet.

Crono Outlook: Mediocre, but he was 14th in the ENECO time trial last year. Maybe he can uncork a decent one at this distance?

Cobbled Outlook: Right up there with his countrymen on this list. I don't think he gets it done, but I do like him to be part of a very gamey final stage.

Skipped over: Keukeleire, Kristoff -- no great skills to display over the weekend. Jens Mouris is arguably a contender, having done a strong ITT in ENECO last year, albeit against a weaker field.