Catching Up With The Armstrong - USADA Battle

Share All sharing options for: Catching Up With The Armstrong - USADA Battle 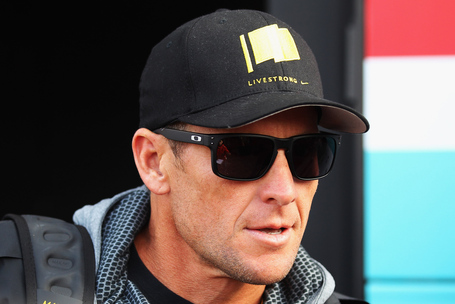 June 16. Do you remember back that far? The Tour de France was about to start and other news was popping up. News about Lance Armstrong. Yes. That dude. In the final days of June the US Anti Doping Administration (USADA) affirmed that it was bringing charges against Lance Armstrong and four other members of the US Postal cycling team staff for participation in a drug ring

It has been a while since we have touched base with the case brought against Armstrong, so what has happened in the meanwhile?

After Armstrong sought a temporary restraining order against USADA, the judge with whom he filed the injunction declined the request, citing the unprofessional manner in which the request was made. The 80-page document filed by Armstrong's legal team was described as a "desire for publicity, self-aggrandizement, or vilification of Defendants" by US District Court Judge Sam Sparks. Armstrong, however, was invited to re-file his petition in a more succinct fashion within a week, which his lawyers did.

Armstrong's argument focused on the authority vested in USADA by Congress through the Ted Stevens Olympic Act. The manner in which Congress delegated authority to USADA, Armstrong argued, made it a government entity, which meant that normal standards of due process applied. The arbitration process USADA falls outside of the typical jury style judicial format and was thus unconstitutional. Though an argument that has not worked in the past, some believed Armstrong's legal team had a chance at shutting down the investigation into him by taking USADA out of the game.

USADA was having none of this. The agency filed a counter suit with the same US District Court, asking it to dismiss Armstrong's lawsuit and "effort to create a new set of rules applicable only to him." Along with the standard counter arguments against the Armstrong legal team's approach, USADA included a particularly damning piece of evidence: an affidavit by USADA head Travis Tygart asserting that USADA did have authority to test professional athletes in the United States, dated from 2005. The surprising nature of the affidavit was not due to the content, but the fact that it was used by Armstrong himself to argue USADA had authority to test athletes in a legal battle with SCA Promotions in 2005 after it balked on paying a bonus tied to Armstrong's final Tour de France victory due to allegations of drug use in earlier years. In an annotated version of the document, Armstrong's lawyers were indecisive over whether or not to highlight how USADA can bring cases against individuals suspected for doping without a positive test for a banned substance, precisely the form of case USADA is bringing against Armstrong now.

As it stands, Judge Sparks has given both sides additional time - until next Friday - to file additional documents in the case of whether USADA will be able to move the Armstrong case to an arbitration panel. Sparks has consulted extensively with lawyers from both sides, grilling Armstrong's representation on why USADA should not have authority to move to arbitration and prying into USADA's reluctance to release much of the evidence brought to bear against armstrong to the defense.

Meanwhile, the Union Cycliste Internationale (UCI) has become involved after initially distancing it from the proceedings. On August 3, it requested that USADA transfer the case file with all of the evidence waiting to be brought against Armstrong to them, showing renewed interest in the case and claiming jurisdiction. Armstrong's lawyers have supported the UCI's attempt to wrest control of the proceedings; the UCI used some of the same arguments as Armstrong's lawyers to justify its claim to jurisdiction over USADA's.

The actions of the UCI have set off alarm bells for critics of the formerly tight relationship between Armstrong and the sport's highest governing body. In 2010, Pat McQuaid, head of the UCI, admitted that Armstrong had made donations totaling $125,000 to the organization during his time as a racer. Though much of the donation allegedly went to anti-doping efforts, it is uncomfortably juxtapositioned with allegations by both Floyd Landis and Tyler Hamilton that the UCI covered up a positive test on Armstrong's part during his time on the US Postal cycling team.

The World Anti-Doping Agency (WADA), the body responsible for overseeing anti-doping efforts in all Olympic sports (including cycling) sided with USADA, asserting that jurisdiction belonged with the body that discovered alleged infractions. The official WADA statement continued to state, "As the independent agency responsible for leading the fight against doping in sport, WADA has urged the UCI to reconsider its position and provide 'all support to USADA in the conduct of this case, including all documents required by them.'" The UCI and USADA have fired bullets back and forth since, with McQuaid arguing that an independent panel should review the case files prior to any agency giving Armstrong and the other four named defendants a suspension.

So, where does this leave us? For the present, it appears likely that USADA will be able to continue with its case against Armstrong, though at a much slower pace than it imagined. With WADA supporting USADA, the UCI is not likely to gain control of the proceedings in the future. USADA has volunteered to take the court to the Court of Arbitration for Sport (CAS) for a public trial, which undermines the UCI's attempts to take over the case. If the US District Court entertains Armstrong's plea for the case to be dropped, one wonders if USADA will turn to the CAS in order to pursue the allegations.